Donald Trump has said he is “absolutely” willing to talk on the phone to North Korean leader Kim Jong-un if Tuesday’s North-South meeting yields positive results.

President Trump, who has shown nothing but contempt for his North Korean counterpart, spoke to the media at Camp David Saturday, once again claiming credit for facilitating intra-Korean dialogue. Pyongyang and Seoul earlier this week reactivated a communication hotline that’s been silent for nearly two years.

“He [South Korean President Moon Jae-in] actually thanked me,” Trump said recalling a recent conversation with the South Korean president. “He said, and a lot of people have said, and a lot of people have written, that without my rhetoric and without my tough stance… And it is not just the stance, this is, this is what has to be done if it has to be done, that they wouldn’t be talking about Olympics, they would not be talking right now.”

Trump himself, of course, was the loudest of the “lot of people” who said that.

With all of the failed “experts” weighing in, does anybody really believe that talks and dialogue would be going on between North and South Korea right now if I wasn’t firm, strong and willing to commit our total “might” against the North. Fools, but talks are a good thing!

He suggested that he’d be willing to speak directly with Kim if certain conditions were met. “Sure, I always believe in talking,” the US president said, adding that Kim “knows I’m not messing around, not even a little bit.” The specific preconditions, however, were not expanded on. “If something can come out of those talks, that would be a great thing for all of humanity, that would be a great thing for the world,” he added.

The possibility of direct engagement between Trump and Kim follows heated exchanges and an increasingly personalized battle between the two nuclear-armed leaders, culminating with the reciprocal boast that their respective “nuclear buttons” are at the ready. “I too have a Nuclear Button, but it is a much bigger & more powerful one than his, and my Button works!” Trump tweeted in reply to Kim’s New Year speech that his “button is always on my table.” 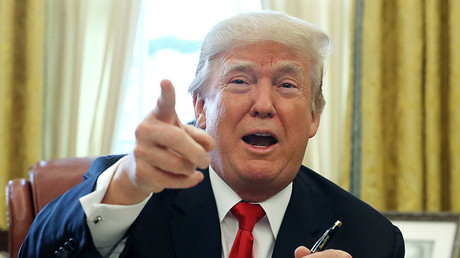 On Friday, Pyongyang agreed to Seoul’s request to hold bilateral talks on North Korea’s participation in the Olympics and other matters of “mutual interest” in the Korean Demilitarized Zone on January 9. The meeting was made possible after Kim signalled a thaw in the relationship with the South during the same New Year speech, in which the now-famous ‘button’ was mentioned.

In a phone conversation with Trump earlier this week, president Moon was able to convince his ally to postpone their joint annual Foal Eagle exercises until after the Winter Paralympic Games in March, so that the talks between two the Koreas have a chance to succeed.

At Camp David Saturday, Trump also said that unlike previous American administrations, he is prepared to take a “tough” stance on North Korea. “You have to have a certain attitude and you have to be prepared to do certain things. And I’m totally prepared to do that,” the president told reporters.

Despite previous statements from the State Department that Washington doesn’t trust Kim to abide by any agreements, Trump expressed support for the upcoming intra-Korean talks. “I’d like to see them getting involved in the Olympics and maybe things go from there. So I’m behind that 100 percent,” the president said. “I would love to see it go far beyond the Olympics, absolutely. And at the appropriate time, we’ll get involved.”