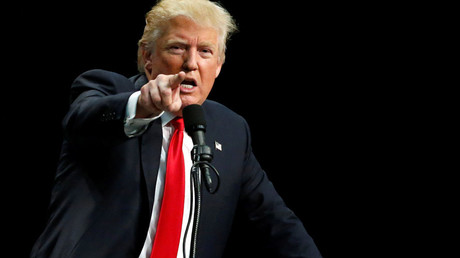 The possible Republican nominee has slammed Barack Obama for not addressing the sudden 1941 attack on Pearl Harbor while visiting the memorial of the American atomic bombings in Hiroshima, Japan. The remark comes as the US prepares to mark Memorial Day.

“Does President Obama ever discuss the sneak attack on Pearl Harbor while he’s in Japan? Thousands of American lives lost,” Trump wrote on his Twitter.

Does President Obama ever discuss the sneak attack on Pearl Harbor while he’s in Japan? Thousands of American lives lost. #MDW

On Friday, Obama became the first US president to visit the memorial of the American atomic bombings of Japan in Hiroshima, which killed thousands of people. The death toll reached 140,000 by the end of 1945. Whereas many call Obama’s visit “historic,” others point out that he has not apologized for the US’ decision to use nuclear weapons.

The Japanese government and its top leadership have repeatedly expressed remorse for its wartime aggression against the US in the lead-up to World War II.

The United States is the only country in the world to have deployed nuclear weapons in combat. The majority of the Japanese disagree with the American justification that the bombing was necessary to help cease hostilities and make Tokyo surrender.

In his next tweet, Trump mentioned Memorial Day to honor “all of the great men and women that gave their lives for us and our country.” On Sunday, Trump is scheduled to be in Washington, DC to take part in the Memorial Day event with bikers from Rolling Thunder – a gathering that aims to raise awareness for American POWs and servicemen missing in action.

Honor Memorial Day by thinking of and respecting all of the great men and women that gave their lives for us and our country! We love them.

During his Wisconsin campaign in March ahead of the state’s April primary, Trump mocked governor Scott Walker for his love for motorcycles, claiming that bikers were his fans. “The bikers love Trump,” the real estate tycoon said in March. “I’m not a huge biker, I have to be honest with you, OK? I always liked the limo better.”

Trump’s bid for presidency has been previously given a boost after ABC News/ Washington Post released a May poll, predicting that he would outperform the likely Democratic nominee Hilary Clinton in a hypothetical general election matchup.