Donald Trump, a fierce critic of Iranian nuclear deal, has so far made no moves to withdraw the US from it. But a continued assault may lead to consequences that would be surprisingly bad for America, analysts warn.

The deal’s future becomes even less promising with the exit of Rex Tillerson as secretary of state – seen as a voice of moderation – and his imminent replacement by Mike Pompeo – a hardliner and an Iran hawk. 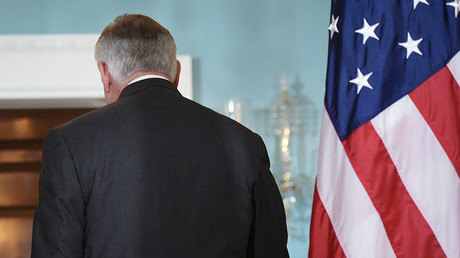 The deal, which is officially known as the Joint Comprehensive Plan of Action (JCPOA), was negotiated in 2015, during the administration of Barack Obama. Under the terms of the deal, Tehran agreed to reduce the number of its uranium enrichment centrifuges by two-thirds, cap the enrichment grade below the level needed for weapons-grade material, and reduce its enriched uranium stockpile by 98 percent for 15 years. In exchange, Tehran received the lifting of sanctions imposed against it over a decade for allegedly secretly making a nuclear weapon – a claim that it has always denied.

Trump, who is in the habit of criticizing the policies of his predecessor, repeatedly called the JCPOA the “worst deal ever negotiated” and accused Iran of breaching it. The International Atomic Energy Agency (IAEA), which is tasked with monitoring Iran’s compliance, says Tehran has been holding its part of the bargain. Still, Trump threatened on many occasions that he would see the deal dismantled.

RT spoke to several experts on the Middle East and Iran in particular on whether the nuclear deal can survive confrontation with Trump, and what the consequences would be of its failure. Sharing their opinions were Vladimir Sazhin, a senior research associate at the Institute of Oriental Studies of the Russian Academy of Sciences, Kaveh Afrasiabi, a political scientist and an adviser to Iran’s team during the negotiations on the nuclear deal, Paul Heroux, a master’s graduate of the Harvard University School of Government, and Sasan Fayazmanesh, a professor of economics at California State University.

Did the deal really prevent armed conflict between Iran and the West?

“There was a possibility of conflict between Iran and Israel in 2011. Iran was developing its nuclear program under virtually no scrutiny by the IAEA… Obama was trying at the time to prevent Israel from attacking Iran. The sanctions were an alternative to war.”   – Vladimir Sazhin

“On the whole there was a little likelihood of military action by the US – studies showed that Iran had a capability to strike back in the region and beyond – it worked as a deterrent for a military action.” – Kaveh Afrasiabi

“The game plan, as the Obama administration envisioned it in its first term, was that as a consequence of paralyzing sanctions there would be massive uprisings in Iran, which would make it easier for the US to launch an embargo against the country, followed by airstrikes. But since the draconian sanctions did not lead to widespread riots, the US decided to reach some sort of agreement with Iran. The result was the JCPOA.” – Sasan Fayazmanesh

Was there any broader importance of the Iran deal?

The value of the JCPOA is on par with that of the Nuclear Non-Proliferation Treaty. It stopped a dangerous development of nuclear technologies in Iran. The experience may be used as a model for other situations.

“It sets a good role model in terms of diplomatic achievement and settlement of disputes (in this field that could be applied to other cases, such as that of North Korea). It is a rare example of peaceful settlement of conflict in the Middle East. It’s a win-win agreement that takes interests of all parties, including the US, into account.” – Kaveh Afrasiabi

Does the Iran deal have any weaknesses?

“From Iranians’ point of view, a weakness could be that they are being subjected to a level of scrutiny that neither the US or Israel are subjected to, which could be an argument that Iran is not being respected as sovereign.” – Paul Heroux

“The JCPOA left intact other sanctions imposed on Iran for its ‘support for terrorism,’ ‘violation of human rights,’ developing missile technology, etc. The JCPOA also did not have a workable and meaningful guarantee mechanism that would prevent the US and other members of the P5+1 from cheating or bringing back more and more sanctions under different pretexts.”

What would the consequences be of the potential US withdrawal from the deal?

“There is no reason for the US to withdraw from the agreement. If there were a reason, President Trump would have withdrawn by now. It would appear that President Trump is being advised by the DOD, CIA, State Department and others to stay in the JCPOA because the agreement is in fact working.” – Paul Heroux

“If the Europeans defy the US, as they did during the Clinton era, then Iran will continue with the deal, since having some economic relations with Europe is better than nothing at all.” – Sasan Fayazmanesh

How would withdrawal from deal affect the US itself?

“The entire world except Israel and Saudi Arabia supports the JCPOA, so by withdrawing from it the US would become a pariah… Europe’s position would be important. If they would stay in the deal, so would Iran. Iran’s trade with the EU doubled in 2017 to $10 billion. Europe wants to deal with Iran. That said, preserving the deal would be unlikely since the US may put pressure on Europe.” – Vladimir Sazhin

The US’ credibility would suffer greatly and it would have adverse effects on the US diplomatic efforts aimed at North Korea. The trust in the US would be universally damaged. Harm its own prestige, global image and international standing.

“It would make it appear that the US is taking a less diplomatic approach to Iran in favor of a more hawkish and punitive approach; we would probably appear impulsive, paranoid, and even self-righteous in that we think we know better than the rest of the P-5, Germany and the EU what is working and what is not working.” – Paul Heroux