On the seventeenth anniversary of the September 11 attacks, MSNBC host Joe Scarborough has called US President Donald Trump a “far graver threat to the idea of America” than the 9/11 attackers.

Speaking during his program ‘Morning Joe’ on Tuesday, Scarborough boldly argued that Trump has the potential to do far more damage to the United States than those behind the attacks on September 11, 2001. 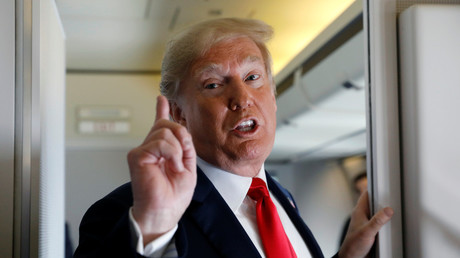 “If you strip America of its ideas, forget about knocking down buildings in the financial district — forget about running planes into the Pentagon. Those are tragedies, but those tragedies bring us closer together,” he said. “America is an idea. You gut America of that idea, that’s when you do the most harm to America.”

He went on to speak of things that have happened under the Trump administration of which he disapproves. Among them were Supreme Court nominee Brett Kavanaugh “refusing to answer whether people should be banned from the US because of their race” and Trump’s response to the Charlottesville violence.

Scarborough said that tragedies such as 9/11 “bring us closer together” and noted that America “rebuilt” and “became stronger” because of the 2001 attacks. But the actions taking place under the Trump administration, he said, seem to be a “far graver threat to the idea of America.”

The journalist’s comments came as he was slammed for a 9/11 op-ed in The Washington Post, in which he said that Trump was a greater threat to the US than “any foreign adversary,” including terrorist groups like Al-Qaeda.

He quickly received backlash on Twitter for those remarks, including from the chief meteorologist of Fox News, Janice Dean, who said she’d like to see Scarborough saying such words to the “families of firemen who ran into those burning buildings to save people and never came home.”

I’d like you to say this in front of a few families of firemen who ran into those burning buildings to save people and never came home. See how that goes.

Others told Scarborough that he helped the man he apparently hates so much get into office by granting him TV appearances on his show in the run-up to the 2016 election.

Scarborough did later state that he “should have shown more care” in the column’s conclusion, which was the part of the article that accused Trump of being a greater threat to the US than any foreign adversary.