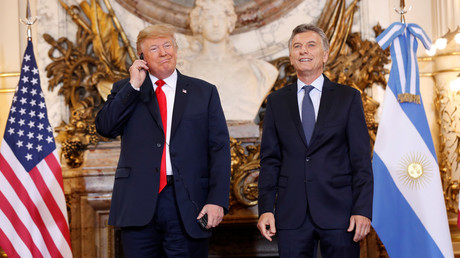 Trump had barely arrived at the G20 summit in Argentina before the gaffes began. Listening to a greeting from Argentinian President Mauricio Macri, Trump ditched his translation headset, apparently due to technical difficulties.

The leaders, who know each other personally from their days in the business world, greeted each other like old friends at Macri’s executive mansion, Casa Rosada, but technical difficulties threatened to throw cold water on the warm meeting.

A problem with Trump’s live translation – delivered via headset – frustrated the president, who removed his headset and ditched it on the floor. “I understood him better in his language than in my ‘interpretation,'” he said.

An aide rushed in and scooped up the malfunctioning earpiece, and things moved on as normal.

“We’re going to be talking about lots of good things for Argentina and for the United States, including trade, including military purchases and other things,” Trump said, adding that the conversation would be “a little bit old times, about 95 percent business.”

The president’s schedule of meetings has been altered in recent days. Trump has cancelled a head-to-head meeting with Russian President Vladimir Putin, ostensibly in light of a naval clash between Russian and Ukrainian ships last weekend. Meetings with Turkish President Recep Tayyip Erdogan and South Korean President Moon Jae-in have been downgraded to informal ‘pull-asides’.

Arrived in Argentina with a very busy two days planned. Important meetings scheduled throughout. Our great Country is extremely well represented. Will be very productive!