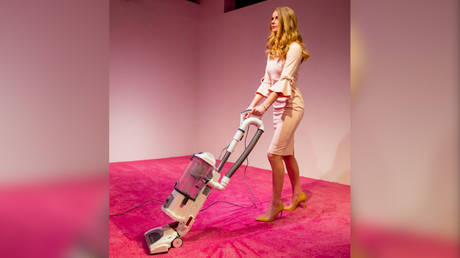 A new art exhibit in Washington, DC, that invites spectators to throw crumbs on the floor for an Ivanka Trump lookalike to clean up with a vacuum cleaner has sparked a strong reaction, including from the Trump family.

The installation by Jennifer Rubell, which is titled Ivanka Vacuuming, opened on 1 February and continues through 17 February at the Flashpoint Gallery in the US capital.

People who view the piece are invited to “throw crumbs on to the carpet, watching as Ivanka elegantly vacuums up the mess, her smile never wavering.”


The piece has sparked a strong rebuke from Trump and her brothers Eric Trump and Donald Trump Jr who labeled the exhibit a “sexist attack”.

“Women can choose to knock each other down or build each other up. I choose the latter,” Ivanka tweeted.

Trump Jr tweeted: “Sad, but not surprising to watch self-professed ‘feminists’ launching sexist attacks against Ivanka Trump. In their crazed world, sexism is OK if hurts their political enemies.”

READ MORE: Liberals cry hypocrisy over reports of Ivanka’s private email use – but it’s not the same as Hillary

In an appearance on Fox News, Eric Trump called his sister a “powerful woman who has done more for women than probably anybody in Washington DC.”

Speaking on RT, Marni Halasa, a political performance artist and activist, said the installation has clearly got under Ivanka Trump’s skin.

“I do think art, it should stimulate debate. What I find interesting is that the artist made this very ambiguous,” she said.

Also appearing on the segment media commentator Gina Loudon argued that ‘Ivanka Vacuuming’ is an example of hypocrisy from the “regressive left.”

“It seems that the Trump derangement syndrome has gone overboard and, certainly, if they had done this with Michelle Obama I’d like to see the art community’s and the left’s reaction to them putting Michelle Obama, for example, with a vacuum cleaner in her hand vacuuming crumbs,” she said.

“I don’t think it would have gone over quite so well with the regressive left but c’est la vie we’re used to the hypocrisy on that side of the aisle.”