Donald Trump has declared that, as the US President, he could pardon himself if Robert Mueller’s ‘Russiagate’ investigation were to find him guilty of crimes. Talk of pardoning, however, is not playing well with Republicans.

“As has been stated by numerous legal scholars, I have the absolute right to PARDON myself, but why would I do that when I have done nothing wrong? In the meantime, the never ending Witch Hunt, led by 13 very Angry and Conflicted Democrats (& others) continues into the mid-terms!” Trump tweeted on Monday.

As has been stated by numerous legal scholars, I have the absolute right to PARDON myself, but why would I do that when I have done nothing wrong? In the meantime, the never ending Witch Hunt, led by 13 very Angry and Conflicted Democrats (& others) continues into the mid-terms!

Trump’s tweet comes hot on the heels of the publication of a 20-page document sent to Special Counsel Mueller from Trump’s legal team earlier this year. The document outlines the president’s legal strategy and argues that Trump cannot be indicted, subpoenaed or found guilty of obstruction of justice because he is the nation’s “chief law enforcement officer.” The document also argues that Trump “could, if he wished, terminate the inquiry, or even exercise his power to pardon if he so desired.” 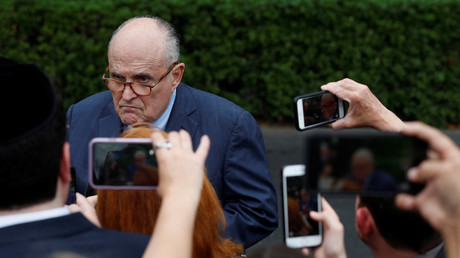 As Mueller’s investigation into alleged collusion between the Trump campaign and Russia in 2016 fruitlessly drags on, Trump was not the only one to tout the President’s power of pardon. His personal attorney, Rudy Giuliani, said on ABC’s ‘The Week’ on Sunday that Trump “probably does” have the power to pardon himself, as the constitution “doesn’t say he can’t.”

In fact, Giuliani reportedly said on Sunday that Trump could shoot former FBI Director James Comey and not be indicted unless he were impeached first.

“If he shot James Comey, he’d be impeached the next day,” Giuliani was quoted by HuffPost as saying. “Impeach him, and then you can do whatever you want to do to him.”

While Trump insists he has done nothing wrong, he has on several occasions considered firing Mueller, whose investigation he sees as a “hoax” and a politically-motivated “witch hunt.” Talk of Trump firing Mueller and pardoning himself has not gone down well with Republicans, who view it as political dynamite.

“I think that would be a terrible move. I think people would erupt. I think even thinking about trying to fire Mueller is a bad move politically,” Rep. Will Hurd (R-Texas) told CBS’ ‘Face the Nation’ on Sunday.

House Majority Leader Kevin McCarthy (R-California) told CNN that while Trump is speaking in hypotheticals, “I don’t think a president should pardon themselves.”

Mueller’s probe has now been ongoing more than a year, and cost the US taxpayer almost $17 million dollars. Its focus has shifted away from looking for Russian collusion and towards finding evidence of obstruction by Trump’s team. As November’s midterm elections approach, Trump has accused Mueller of prolonging the investigation to hurt Republicans at the polls.

Now that the Witch Hunt has given up on Russia and is looking at the rest of the World, they should easily be able to take it into the Mid-Term Elections where they can put some hurt on the Republican Party. Don’t worry about Dems FISA Abuse, missing Emails or Fraudulent Dossier!

Giuliani has told the New York Times that Mueller’s office intends to wrap up the investigation by the beginning of September.

Trump has used his power of pardon five times since he took office last year. Most recently, he pardoned conservative commentator Dinesh D’Souza last week. D’Souza pleaded guilty in 2014 to making illegal campaign contributions, and has been accused by the left of racism for his off-color tweets.