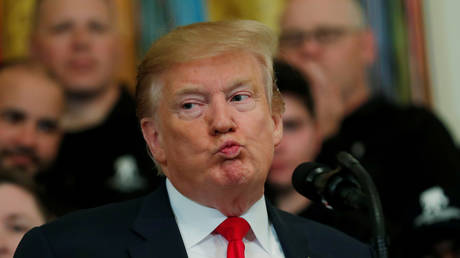 President Donald Trump’s post-Mueller victory lap continued, with Trump posting a video featuring mainstream news anchors getting to grips with the conclusion of Mueller’s report: There was no ‘Russian collusion’ in 2016.

The video was accompanied with the text “NO COLLUSION – NO OBSTRUCTION,” a phrase tweeted no fewer than three times by Trump on Thursday afternoon.

Mueller’s final report was released to the public on Thursday, albeit with some classified and legally sensitive information redacted. It accused Russia of attempting to run an interference campaign in the 2016 presidential election, but concluded that neither Trump nor any other American “conspired or coordinated” in this effort.

Mueller was unable to conclude whether Trump sought to obstruct the investigation, but stopped short of “exonerating” the president.

Trump’s tweet featured a montage of cable news anchors – many of them true believers in the ‘Russiagate’ conspiracy – dealing with the news. “The president has just been exonerated,” CNN’s Pamela Brown said in one clip, originally aired last month when the report’s summary broke. “Can we just take a step back and focus on the fact that this is a nearly two-year investigation that has swirled around the president since day one of his presidency. And he has just been exonerated.”