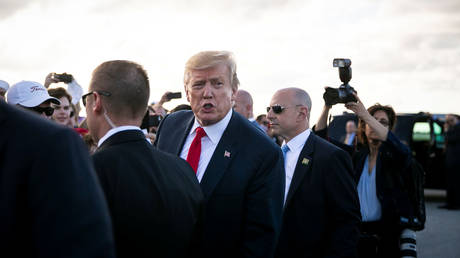 US President Donald Trump unleashed scathing remarks about special counsel Robert Mueller’s “crazy” report on Friday, saying it was written by “angry Democrats” and contains statements which are “total bulls**t.”

Trump wrote a series of tweets criticizing the report, which cleared him of any collusion or conspiracy with Russia but stopped short of fully exonerating him. He took specific aim at certain statements in the report which he labeled “fabricated,” “totally untrue,” and “total bulls**t.”

Statements are made about me by certain people in the Crazy Mueller Report, in itself written by 18 Angry Democrat Trump Haters, which are fabricated & totally untrue. Watch out for people that take so-called “notes,” when the notes never existed until needed. Because I never….

…agreed to testify, it was not necessary for me to respond to statements made in the “Report” about me, some of which are total bullshit & only given to make the other person look good (or me to look bad). This was an Illegally Started Hoax that never should have happened, a…

He alleged that some people gave statements to Mueller’s investigators in order to make themselves look good or to make him look bad. “This was an illegally started hoax that never should have happened,” he added.

Less than two hours after Trump’s comments, House Judiciary Chairman Jerrold Nadler subpoenaed the Justice Department for a full, unredacted version of Mueller’s report, as well as its underlying evidence.