President Donald Trump has signed an executive order that will slap sanctions on foreign companies or people who interfere in US elections.

The sanctions will target anyone attacking election infrastructure or distributing propaganda or misinformation, national security adviser John Bolton claimed. The order, Bolton said, will “protect the United States from foreign interference in our elections and really our political process more broadly.” 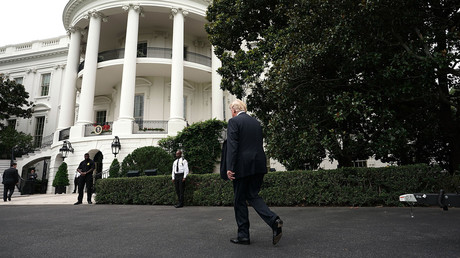 The order will allow the Director of National Intelligence to identify foreign meddlers and direct the Treasury Department to apply sanctions. In making that assessment, the DNI will consult with all of the US’ multifarious intelligence agencies.

While not strictly specified, the order more than likely targets Russia. White House Special Counsel Robert Mueller has indicted 13 Russian individuals and three companies for allegedly meddling in the 2016 presidential election. These so-called ‘Russian hackers’ supposedly purchased Facebook advertisements in an attempt to sway debate, but even Deputy Attorney General Rod Rosenstein admitted that no proof exists that the final election result was actually influenced.

Director of National Intelligence Dan Coats told reporters on Wednesday that the US is not currently seeing a Russian interference campaign, but warned that “it’s only a keyboard click away.” Coats did not tell reporters what evidence, if any, the intelligence community has seen of Russian hacking this year, but mentioned that he had seen “capability and attempts” from Iran, China, and North Korea as well.

Trump’s order comes less than 100 days before American voters head to the polls for the midterm elections, and just two months after Trump was derided by both Democrats and Republicans for declining to press Russian President Vladimir Putin harder on Russia’s alleged election meddling, after the pair met in Helsinki.