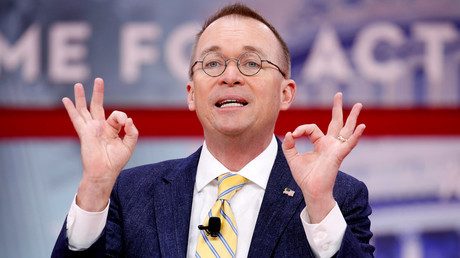 Trump has appointed Mick Mulvaney, Office of Management and Budget director, to temporarily replace John Kelly as his chief of staff. Mulvaney is a longtime friend of the financial sector and a self-described “right-wing nutjob.”

While Mulvaney joined the Trump administration to lead the Consumer Financial Protection Bureau (CFPB), tasked with protecting ordinary Americans from predatory financial firms, he was on much better terms with those financial companies and led a concerted effort to rein in the agency’s powers, hiring political appointees to do work that was once done by impartial staffers.

I am pleased to announce that Mick Mulvaney, Director of the Office of Management & Budget, will be named Acting White House Chief of Staff, replacing General John Kelly, who has served our Country with distinction. Mick has done an outstanding job while in the Administration….

Morale at the CFPB cratered after he took over, dropping more than 25 points – significantly more than at other agencies, according to the Partnership for Public Service.

A former South Carolina Congressman, Mulvaney was quite open about where his loyalties lay, telling an American Bankers Association conference in April: “We had a hierarchy in my office in Congress. If you’re a lobbyist who never gave us money, I didn’t talk to you.”

If you’re a lobbyist who gave us money, I might talk to you.

When Mulvaney introduced himself to economic adviser Gary Cohn as “a right-wing nutjob,” it was clearly meant in humor, but he told Politico he is proud of his extremism.

I don’t think anyone in this administration is more of a right-wing conservative than I am.

His budget-slashing ideas have made it into many of the administration’s proposals, and he continues to push for even deeper cuts to Social Security and Medicare despite Trump’s campaign promises to leave those programs alone.

Also on rt.com
John Kelly to leave job as chief of staff by end of year – Trump


Trump announced Mulvaney’s appointment on Friday with a tweet, ending a week of speculation on who would temporarily replace the outgoing general. A shortlist reportedly included Treasury Secretary Steven Mnuchin and Vice President Pence’s chief of staff Nick Ayers, as well as former New Jersey Governor Chris Christie, who abruptly withdrew from consideration for the post. Ayers, Trump’s original pick for chief of staff, also reportedly declined the position because the president wanted a two-year commitment and he could only commit until spring, when he plans to move to Georgia to work for a Republican superPAC.