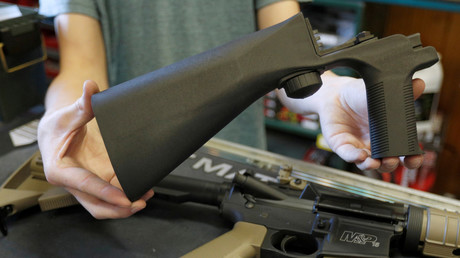 On Saturday the Trump administration took the first steps to ban ‘bump stocks’ by formally submitting legislation to ban the modification, which gives high-capacity rifles the ability to shoot as machine guns.

The Department of Justice (DOJ) submitted a notice of regulation which, it said, will “clarify that the definition of “machinegun” in the National Firearms Act and Gun Control Act includes bump stock type devices, and that federal law accordingly prohibits the possession, sale, or manufacture of such devices.”

Saturday’s move comes just two weeks after President Donald Trump said that he had directed the DOJ to propose the rule change.

“President Trump is absolutely committed to ensuring the safety and security of every American and he has directed us to propose a regulation addressing bump stocks,” Attorney General Jeff Sessions said.

The February 14 Parkland high school shooting in Florida has reignited the gun control debate in the US. Although the alleged shooter, 19-year-old Nicolas Cruz, did not use a bump stock device, Florida Gov. Rick Scott, signed a bill into law on Friday, banning the modification as well as raising the minimum age for purchasing a firearm in the state from 18 to 21.

However the National Rifle Association (NRA) filed a federal lawsuit seeking to block restrictions introduced by the legislation, claiming that it violates the Second Amendment. “This blanket ban violates the fundamental rights of thousands of responsible, law-abiding Florida citizens and is thus invalid under the Second and Fourteenth Amendments,” the lawsuit states.

A bump stock was used by Las Vegas shooter Stephen Paddock, who went on a killing spree on October 1, 2017. Paddock killed 58 people and injured over 850 during an open-air concert near the Mandalay Bay Resort and Casino.