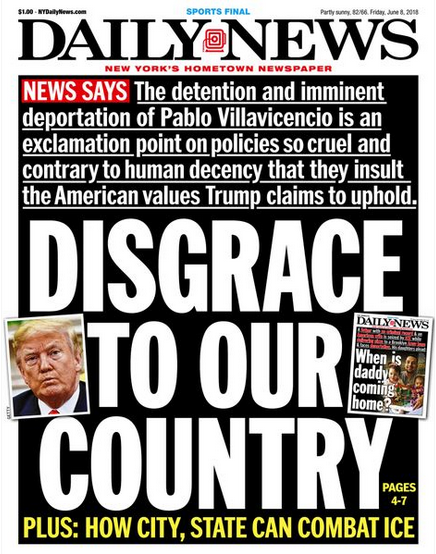 The New York Daily News (6/8/18) reporting on an immigrant who was reported to ICE for delivering a pizza to a Brooklyn military base.

It’s not as if newspaper closures and layoffs are anything new. What is it about the layoffs at the New York Daily News that have aroused more talk of the death of print or an end of an era than other media bloodlettings?

The recent news wasn’t a total surprise; staff had been bracing for layoffs since Tronc, which publishes the Chicago Tribune, bought the paper last year for $1, in addition to assuming its liabilities. On July 23, it was announced Tronc was laying off half of the editorial workforce, including its two top editors. The enormity of this carnage isn’t just industry news. For New York City, it feels like an offense to the entire city, and a testament to how much the city has changed.

The very word “tabloid” implies something trashy—celebrity reporting, sensational headlines, paparazzi and fluff. It’s not really fair, especially since this description carries an anti-working-class sentiment, but also because the Daily News over the past several years had realigned itself to be the pinnacle of local reporting. The New York Times focuses on big-picture analysis of metro politics, but the local coverage tends toward culture matters, and the bulk of its focus is as a national paper, not a local one. The New York Post sometimes lets a nuanced feature slip past an editor, but the Page Six stories and right-wing venom outweigh real reporting.

In that void, the Daily News, which during the 1975 financial crisis delivered one of history’s greatest headlines, “Ford to City: Drop Dead,” built a non-pretentious but also non-condescending voice that’s easily readable on a subway commute, that had as its focus the issues facing working New Yorkers. While the Times may treat eastern Queens like a remote village in the Amazon, the Daily News is as much Greenwich Village as it is Parsons Boulevard.

The Daily News is not a left-wing newspaper, as many of its supporters and critics might allege. Its editorial board for years had maintained a center-right position, a kind of more sensible version of the Post’s opinion section. A tumultuous strike in 1990 led to the paper being spun off from the Tribune Company, along with a loss of jobs and revenue. Richard Steier, editor of the Chief-Leader, a newspaper covering the city’s government workforce, noted that the Daily News had a rather cozy relationship with the Giuliani and Bloomberg administrations, in part because of then-owner Mort Zuckerman’s closeness with both mayors. The paper also enthusiastically backed Mitt Romney’s failed campaign against President Barack Obama, which Steier noted as rooted in Zuckerman’s devotion to Israel. 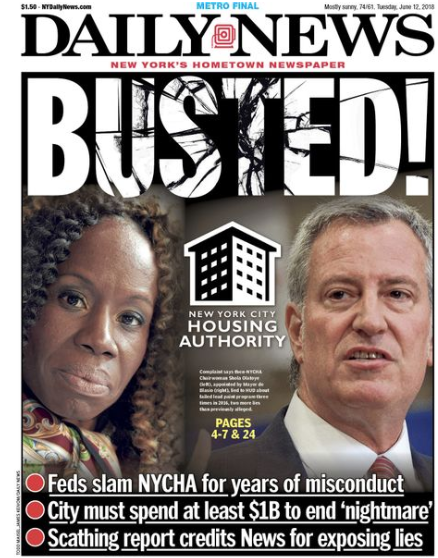 While the election of Mayor Bill de Blasio might have been heralded as a progressive turn for the city, it also, perhaps ironically, let the paper regain its populist spirit as a paper with an old-fashioned mission to recognize who has power and who abuses it—whether that’s a union president, city commissioner or business executive—and how those powerful people and institutions affect city services, policy and quality of life. That means being dogged in the face of powerful people and it requires a type of reporting unfit for the Internet age: waiting at the end of a subway line to catch a train operator coming of her shift to talk about the MTA, walking the halls of public housing complexes, sitting on police scanners to hear where squad cars are headed.

To be fair, it’s not as if the entire staff is gone. Greg Smith, a fabulous public housing reporter, remains, as does its main labor correspondent, Ginger Adams Otis. There’s a sense that Tronc doesn’t want to give up entirely on reporting on institutions of power, but consider what’s been cut out from under the journalists that remain. Court reporters are gone, as are “runners,” people who head out to the street to get initial reactions for breaking news. The photography department, full of veterans who know the city inside and out, is gone. To use everyone’s least favorite expression, the so-called lucky survivors at the Daily News are expected to do more with less.

“It all depends on what the long-term plans of Tronc are, and if you’re going to have a future buyer for the paper,” Steier said:

The question becomes, to what degree are these reporters going to be able to do what they’re doing, and when are they going to be called in to move off regular beats to shore up other areas? It’s a question of how many editors you’re going to have and how savvy they are.

The fear, he said, is that “online tends to be out-of-town. It takes a fair amount of scrolling down to get to solid New York stories.” As for the local news that gives the print edition its fire, online, “it’s not going to be played out like the Kardashians.” 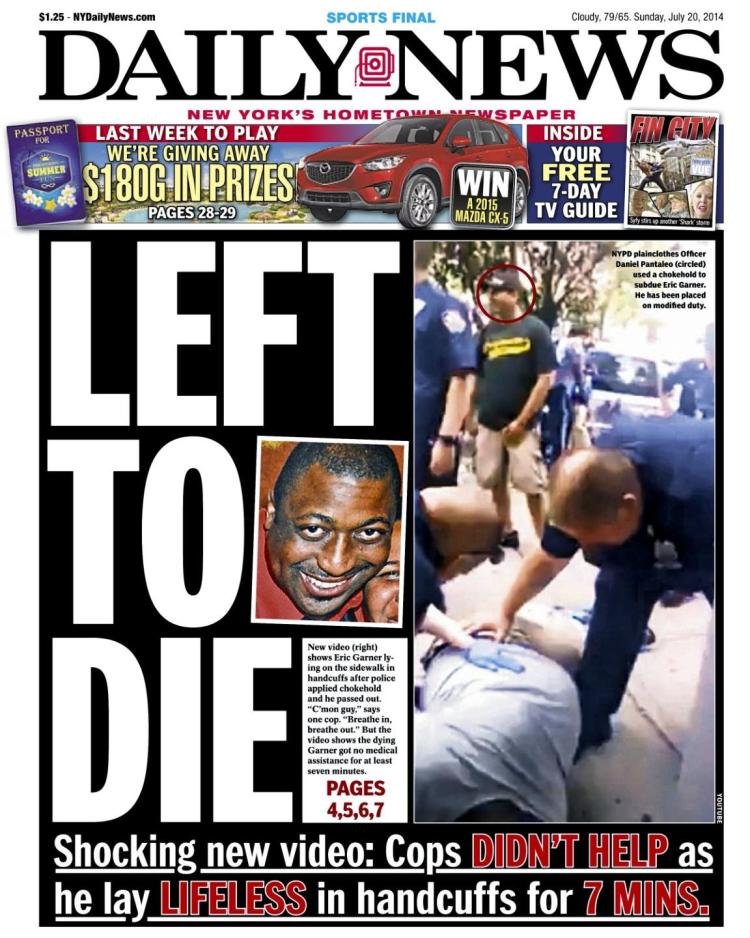 As one survivor of the layoffs intimated, the slicing of the editorial staff was read as a decision to shift to digital and constant output over harvesting original news. The business perspective is that content generation drives ad revenue, the Internet feeds of new constant production, not news gathering, which takes time and energy. But remember: there are no hot takes, no retweets, no opinion columns and no responses without original news. The paper lives on, but with little contribution to the news cycle and, worse, it appears unsustainable, especially as some who remain ponder leaving the paper voluntarily.

The News skewered local politicians, lobbyists and entrenched interests, from wayward mayors to Donald Trump. Unscrupulous developers and corrupt politicians can breathe a sigh of relief. Poor people, working people, racial minorities will lose a powerful, effective voice. The city will be less alive and less democratic, its politicians less accountable to the people they serve. It was the News’ Greg B. Smith who broke open the massive lead scandal in the public housing authority, forcing the city to acknowledge that hundreds of children had been sickened.  It was because of the newspaper that the world saw the video of Eric Garner, the unarmed black man who died shouting out “I can’t breathe!” as a police officer placed him in a chokehold and wrestled him to the ground.

If people in power are celebrating this reduction, or at least the influence of the paper, it’s a bad sign. Case in point: the Sergeants Benevolent Association, one of the NYPD’s most vocal unions, once had a large anti-Daily News advertisement across from a Trump Organization building near the Stock Exchange, assuredly in response to the paper’s coverage of police abuse. The SBA has a little bit of what it wanted—less heat on the department, more editorial silence. Mayor Bill de Blasio, it was reported in May, pondered in a leaked email if massive cuts to the Daily News would be good for his administration. 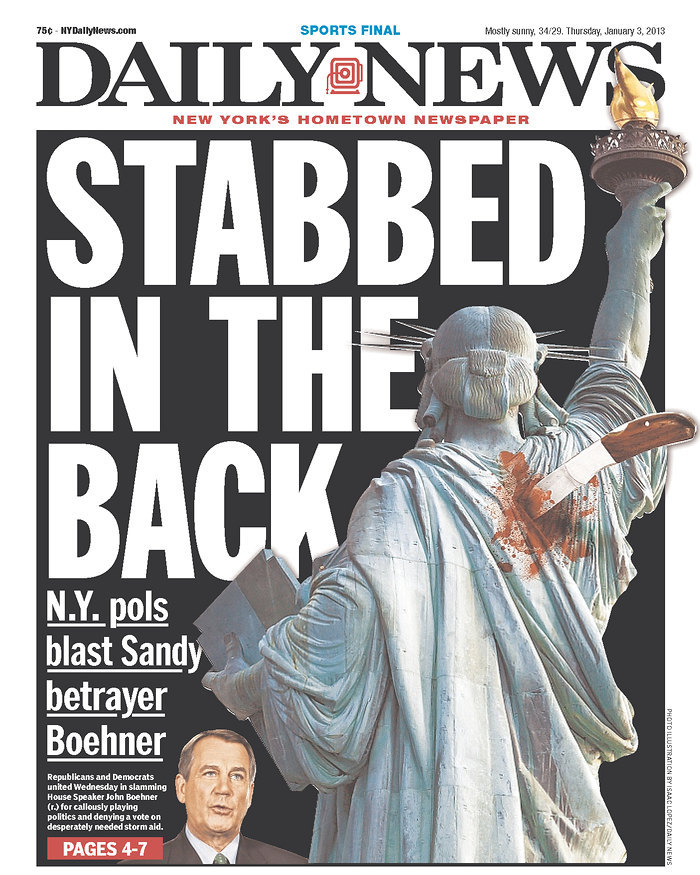 “It feels different this time.” This mantra has come from the mouths of various reporters in the past year few years, surveying the charred landscape—yes, downsizing and consolidations have been occupational hazards for a while, but the shift that’s happened in professional media, at least in New York, appears more existential than it ever was before. When the Village Voice announced it would no longer stay in print after years of layoffs, and after its competitor the New York Press died entirely, the takeaway wasn’t so much a story about a dying newspaper, but a dying culture. If a paper that served rock ‘n’ rollers, East Village artists and tenant activists couldn’t stay afloat in New York, maybe New York wasn’t that kind of city anymore. Again, it feels like we lost a piece of the city.

The counter argument to this sad observation is that there is still plenty of media in the city, however, there is very little that suits a general audience, especially when it comes to reporting on people in power. Politico, Crain’s and City and State do good political and economic journalism, but mostly service an audience that’s already enmeshed in government and business affairs. The Times has little appetite to appear more provincial, and the Post offers more entertainment than service journalism. Sure, places like Gothamist are appreciated, but one must sink resources into covering beats like the courts or public housing – hardly sexy topics, yet vitally important—rather than report on them piecemeal.

Unless Tronc can work a miracle, the city’s population is going to be less outraged at City Hall and the NYPD, because it’ll know less about them. Politicians will be more emboldened to lie, since they’re under less threat of being caught and being on the front page.

In a sense, Tronc didn’t just make a cut to the newsroom of a tabloid, it took a bite out of the city’s passion, its desire to fight City Hall. It cut its readers, not just its workers.