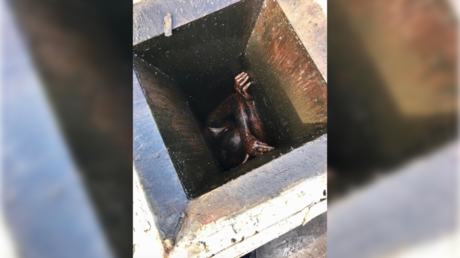 Police were called to a vacant Chinese restaurant in California on Wednesday after passersby heard continuous moans, crying and pleas for help.

“So I went into the back and the door was open but the screen was locked. So as soon as I pulled the door I could hear. I keep hearing please help me. Please help me. Help me,” neighboring business owner Igor Campos told KTVU.

First responders quickly determined the source of the desperate cries for help, the ventilation system on the restaurant’s roof. With support from firefighters, they climbed onto the roof and, to their dismay, discovered a 29-year-old man trapped in the grease duct which runs from the roof to the kitchen.

The man was unable to move despite being coated in grease and oil. Firefighters spent roughly half an hour extracting the man from the duct with cutting tools at roughly 9:30am local time Wednesday.

When he emerged he was extremely dehydrated and physically exhausted. He was immediately rushed to hospital for emergency medical treatment.

Alameda county police are conducting a trespass and vandalism investigation but have yet to determine whether the man intended to commit a burglary, though they strongly suspect this was his reason for entering the vent.

Also on rt.com
Boomerang effect: Burglar knocks himself out with a rock he threw to break store window (VIDEO)


“People break into abandoned buildings to get copper wire and other recyclables to make some money so this maybe a case of that,” Sergeant Ray Kelly with the Alameda County sheriff department said as cited by KTVU.

“It is likely he [would] not have survived another day given the circumstances. The suspect is expected to make a full recovery,” Kelly added in an online statement.