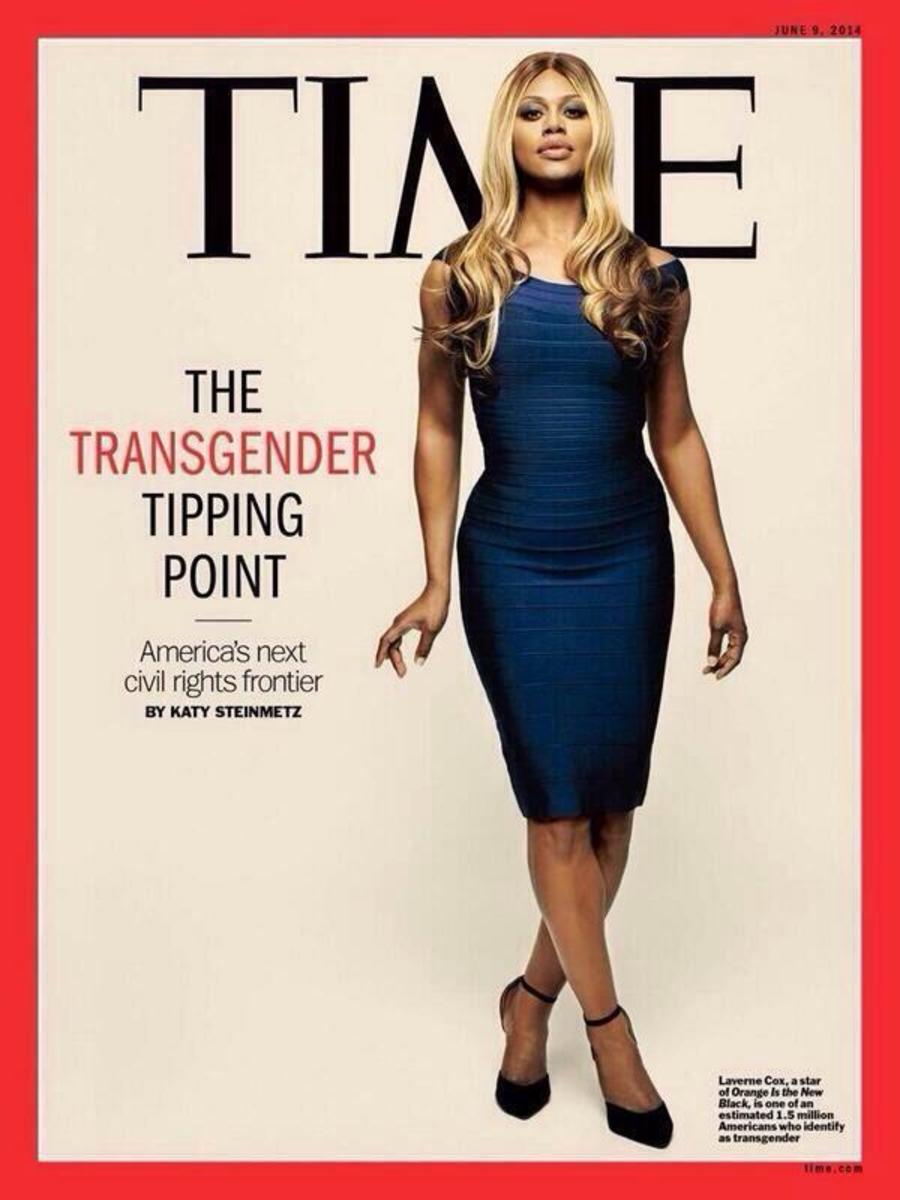 Time magazine (5/29/14) declared a “transgender tipping point” in 2014, but corporate media continue to treat trans identity as a matter of controversy.

The New York Times (10/21/18) received access to a memo from the Trump administration calling for the Department of Health and Human Services to adopt a definition of sex founded on “a biological basis that is clear, grounded in science, objective and administrable.” The memo called for a definition that assumed a male/female sex binary, determined by the sex assigned to a person at birth based on genital appearance. Four days after this decision, the Department of Justice argued that it is legal to discriminate against transgender people in issues of employment.

Many in the media have been quick to denounce the Trump administration in the wake of these actions—without, however, assessing the ways that media coverage of trans issues have set the stage for this formalized discrimination. Ever since the so-called “trans tipping point”—how Time magazine (5/29/14) characterized the spate of attention given to Orange Is the New Black’s Laverne Cox—news media have been fascinated with transgender issues, often using the controversial nature of transgender rights to attract readership. Media outlets have featured many pieces over the last few years that do not simply sensationalize transgender lives, but attempt to frame them as up for debate.

This framing is not new for news media. Writing for the “culture wars” section of The Cut (2/7/16), Jesse Singal previously wrote on the firing of sexologist Kenneth Zucker, who is most famous for arguing against accepting the gender identification of transgender youth. Singal framed Zucker’s firing, from the Child Youth and Family Gender Identity Clinic in Toronto, as the result of transgender activists who were opposed to the questions Zucker is asking. This was depicted as an important debate being been shut down—“allowing a vital scientific question…to be decided by activists.” 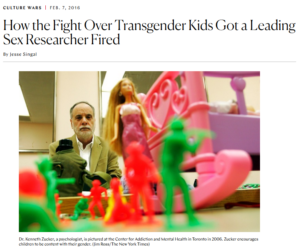 Singal’s piece was particularly pertinent for understanding the Trump administration’s actions, given that the administration specifically appealed to an “objective” and scientific definition of sex. This appeal mirrors Singal’s own framing of self-identification and science as at odds, and justifies scientists and experts speaking over transgender individuals. 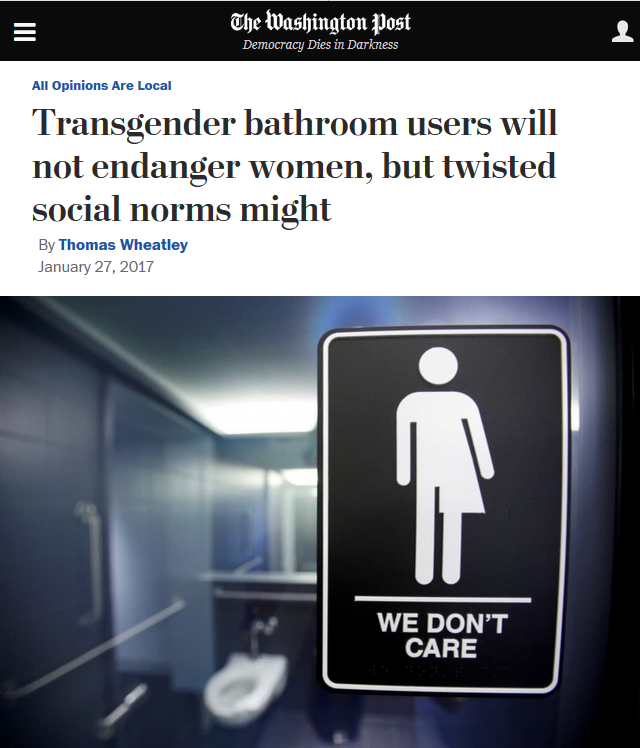 The opinion sections of online news sites have also facilitated the idea that human rights are a “controversy” if the humans are transgender. For example, in an opinion piece in the Washington Post (1/17/17), Thomas Wheatley argues that while allowing transgender people to use their own genders’ bathroom facilities will not hurt women, the left “trivializes the debate as a patently obvious matter of civil rights.” Wheatley maintains that this debate is important because the “broader trend toward gender nullification — and its dissolution of prudent, time-tested boundaries of conduct”—will “directly endanger women,” because “traditional gender roles still serve as a deterrent to predatory behavior” (as if “predatory behavior” can’t be an expression of “traditional gender roles”).

By providing a platform to Wheatley, the Post allowed an abstract debate about hypothetical social norms to take precedence over protecting the right of transgender individuals to safely exist in public. While Singal’s piece framed scientific debate as more important than transgender rights, Wheatley promoted debates about social values as more important: “I do not want to vilify Mother’s Day as transphobic or chide basic chivalry as wrongful discrimination,” he declared.

Wheatley attempted to use a both-sides framing by brushing aside the most odious arguments against transgender rights, but ultimately only did so to make his later rejection and insistence on debate look more reasonable. This clearly demonstrates the extent to which Wheatley sees transgender lives as an abstract rhetorical talking point for a broader debate—about how “a wholly inclusive construction of gender…strips gender of all concrete meaning”—rather than as real human lives with their well-being at stake.

For transgender individuals, the stakes are high; questions of bathroom access deal with the ability to exist in public at all. An actual and fair analysis of the issue would take these concerns seriously and emphasize the effects that these issues have on transgender lives. 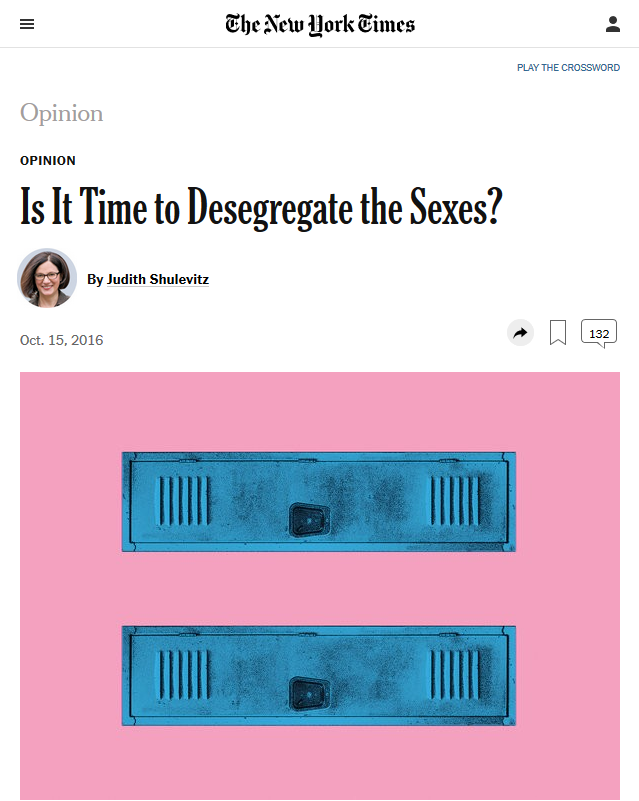 Acknowledging that trans people know their own gender “has produced a surprisingly broad backlash, from secular feminists as well as evangelical conservatives” (New York Times, 10/15/16).

Likewise, a New York Times article by Judith Shulevitz (10/15/16), headlined “Is It Time to Desegregate the Sexes?,” argued that Obama era definitions of sex (the same definitions the federal government is scrapping) have been broadened too far in an attempt to protect transgender students. The article maintained that anti-transgender sentiment cannot be described as “mere intolerance,” because some anti-transgender activists are non-religious, presenting anti-transgender radical feminists as a more rational voice in opposition to transgender rights.

The article also framed the debate about transgender rights as an issue of “clashing values”: “Religious pluralism requires accommodation of the demure as well as the less inhibited.” While the piece makes several defenses of trans rights, the idea that we need to debate the federal definitions of sex set the stage for the Trump administration to change those definitions. In fact, the administration is responding to the same concerns that Shulevits says we must fairly consider. While the Times (10/21/18) now bemoans the administration’s proposal that transgender people be “defined out of existence,” its opinion section previously provided a platform for advocating these very definitional changes.

Following the release of the memo, media reporting has continued to use the framework of debatability to talk about the administration’s actions. An Economist piece (10/27/18) titled “Who Decides Your Gender?” condemns the memo, but goes on to suggest that allowing self-identification could harm efforts to “keep women and children safe.” It argues that “deciding how to balance competing rights and how to weigh risks will demand careful debate.” The idea that transgender people’s right to self-identify and exist in public spaces is up for debate is itself central to the justifications the Trump administration has provided for their actions.

Outlets like the  New York Times and Economist simultaneously condemn the administration’s assault on transgender rights while propping up the framework that has been used to justify them. If media are truly interested in weighing risks, they ought to begin by understanding the intense forms of marginalization and discrimination that transgender individuals face. Unless we start with these ugly realities, any call for debate will simply function to render transgender lives abstract and potentially disposable.