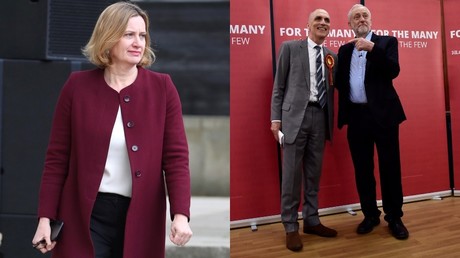 Amber Rudd has hit out at Labour MP Chris Williamson, labelling him one of “Putin’s puppets” after his appearance on RT where he blamed the UK govt for creating a child poverty crisis this Christmas.

The Work and Pensions Secretary, and close ally of Prime Minister Theresa May, was widely ridiculed on social media for ignoring the issue of poverty in the UK, which was highlighted recently in a damning UN report.

Rudd made the comment after Williamson had tweeted about his interview on RT’s Going Underground show. He talked about his “utter outrage” at a report by housing association, the Peabody Trust, that says more than 100,000 children are at risk of being plunged into poverty this Christmas, as families wait for their delayed universal credit payment.

The new work and pensions minister took to Twitter to lash out at the Corbynite MP for having the temerity to highlight this damning report on a program commissioned by RT – a news channel many Conservative MPs have appeared on.

Williamson responded to Rudd by insisting he wouldn’t get “personal” with her and asked how she could find it acceptable that so many children will be adversely affected because of a dysfunctional welfare system.

Thanks to our polices there are:

👉 more children with working parents than ever before
👉 boosting their life chances this Xmas https://t.co/36cBYA5NGl

I’ve no interest in going personal Amber, a hundred thousand could be dragged into poverty this Christmas because of universal credit. Surely you don’t think that’s acceptable?

Many on Twitter criticized Rudd for focusing on the medium and not the message, accusing her of being in denial. Others suggested that RT as a broadcaster provides a platform for such issues to be talked about, whereas channels such as the BBC fail to adequately address them.

Who hears 100,000 kids in poverty at CHRISTMAS and their first thought is “oh labours on Russia today” wrong priorities. #Shameful#GTTO

Classic…. complain about the medium, don’t actually address the issue- you genuinely don’t care about children growing in desperate poverty, do you?

The Tory controlled BBC do not give the platform to really talk about these issues, there lies the real problem. U see that you’re not really denying the topic of discussion though!

The Peabody Trust believes that a large number of the 110,000 households that are migrating over to the new universal credit system during the run up to Christmas will be forced into debt as they borrow money to make ends meet. This includes 67,000 families collectively looking after an estimated 116,000 children.

READ MORE: Declaration of Human Rights is 70 this year, and Britain has violated every single article

It comes after Philip Alston, the UN’s rapporteur on extreme poverty and human rights, slammed the UK government’s “punitive, mean-spirited, and often callous” policies, undertaken as a “political choice” rather than for economic necessity, during his recent fact-finding mission in Britain.