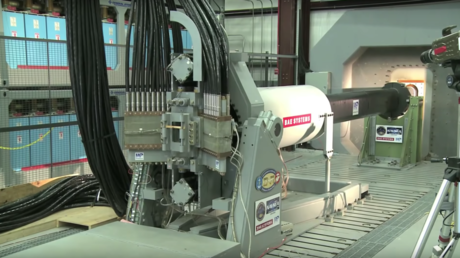 A $500-million project to develop an American electromagnetic railgun, in the makings for over a decade, should be used as a failed “case study” on how not to develop new weapons systems, a top US admiral has said.

“I would say that railgun is kind of the case study that would say ‘This is how innovation maybe shouldn’t happen,’” the chief of naval operations, Adm. John Richardson, told the Atlantic Council. “It’s been around, I think, for about 15 years, maybe 20. So ‘rapid’ doesn’t come to mind when you’re talking about timeframes like that.”

The futuristic weapon has been in development since 2005 and already cost the US taxpayer a whopping $500 million – and is not expected to enter service in the foreseeable future, if ever, the admiral admitted. Originally the Pentagon envisioned installing the completed weapon on Zumwalt-class destroyers by the mid-2020s.

The admiral expressed hope that, even in the worst-case scenario, the Navy might utilize some of the research in future weapons development. For instance, he said, the US military can benefit from the research on hypervelocity projectiles, which can potentially be used “in just about every gun we have.” Last August, the Navy reportedly test-fired hypervelocity projectiles (HVP) from a standard Mk 45 5-inch deck gun based on USS Dewey (DDG-105).


The Pentagon has, for over a decade, been funneling money into several next-generation directed-energy weapons systems. Although the railgun, developed by BAE Systems and General Atomic, technically works, its performance is so below its design specifications that the Navy reportedly mulled scrapping the project altogether. Yet Richardson remains hopeful that the railgun is eventually “going somewhere,” adding that, “we just need to get the clock sped up with respect to the railgun.”