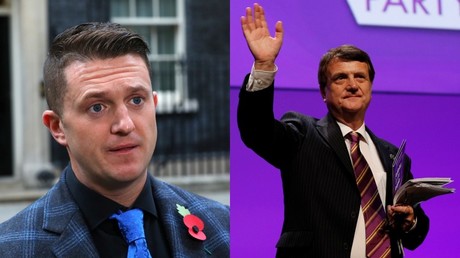 Ex-EDL leader Tommy Robinson’s new role as special adviser to UKIP has prompted one of its leading politicians to quit the party in protest, days after Nigel Farage slammed leader Gerard Batten for hiring the controversial figure.

Patrick O’Flynn, UKIP’s MEP, has announced that he’s resigning from the party after failing to dissuade the leadership from its “apparent and growing fixation” with the far-right activist, echoing recent sentiments voiced by Farage on his LBC radio show.

In an unexpected move, UKIP’s former economics spokesperson said that he would be joining the Social Democratic Party (SDP), which currently has no elected officials at any level of government, The Independent reports.

O’Flynn said: “Without any mandate from the membership or the party’s elected ruling body to go down this path, Gerard is transforming what UKIP stands for and offers to voters.”

The move comes after former UKIP leader Farage labeled Batten “shameful” for recruiting Robinson – whose real name is Stephen Yaxley-Lennon – as the party’s adviser on rape gangs and prisons. He claimed he would be writing to UKIP’s National Executive Committee (NEC), urging them to call a vote of no-confidence in Batten, in a bid to “get rid of him.”

In response, Robinson has taken to social media to attack Farage and defend Batten, accusing the prominent Brexiteer of being a “fool” who is a “complete sell out.” In one Facebook post, he ranted: “He couldn’t be more elitist and establishment if he tried! Gerard Batten is a decent man, not a snake like you Nigel.”

The right-wing Brexit party appears to be going through an identity crisis, experiencing internal strife since the EU referendum in 2016, with many short-lived leaders, tanking in the polls, and a new recruitment drive propelled by iconic alt-right social media figures.

Announcing the addition of Robinson into UKIP’s ranks, Batten insisted the EDL founder had been “persecuted by the state because of his views” and was “good to have on our side,” claiming he had “great knowledge” on the subjects of grooming gangs and prison reform.

Under current rules, present- and ex-EDL members are banned from joining UKIP, but the party announced last week that it had begun a process to allow Robinson to become a member. To date, the National Executive Committee has resisted the move.