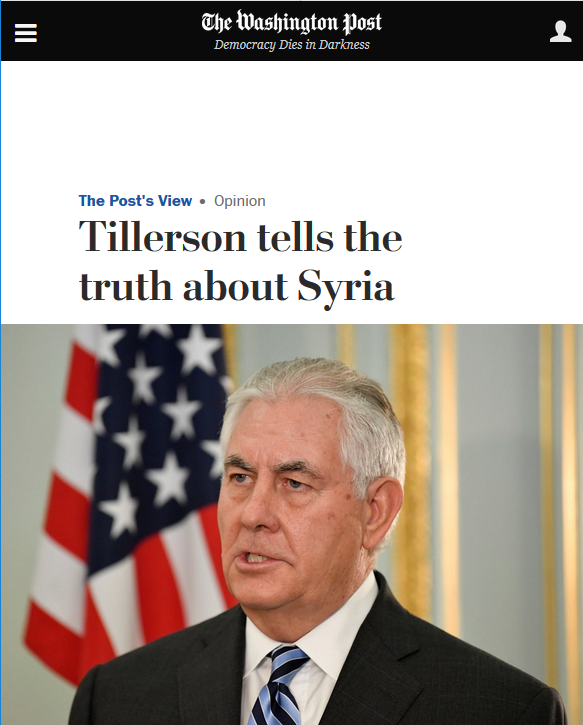 Washington Post (1/22/18): Tillerson will break with Obama’s Syria policies by maintaining the occupation of Syria started by Obama.

In a speech at Stanford this month, US Secretary of State Rex Tillerson declared that America intends to keep military troops in Syria indefinitely, in pursuit of the US’s “key end states for Syria,” including “post-Assad leadership,” the marginalization of Iran and the elimination of “weapons of mass destruction” that the US claims Syria has.

Occupying a country without the permission of the host government, as America is doing in Syria, contravenes international law. Nor does the US have a legal right to pursue regime change in Syria. Yet multiple media outlets have praised Tillerson’s remarks.

Newsweek (1/19/18) ran an article from the Atlantic Council’s Frederic Hof that called Tillerson’s speech “a major improvement in the American approach to the crisis in Syria.” The piece concluded that “what Mr. Tillerson has articulated is more than good enough as a starting point for a policy reflecting American values and upholding American interests.”

Tillerson bluntly recognized a truth that both President Trump and President Barack Obama attempted to dodge: that “it is crucial to our national defense to maintain a military and diplomatic presence in Syria, to help bring an end to that conflict, and assist the Syrian people . . . to achieve a new political future.”

Belatedly, Tillerson has recognized (as critics of both Trump and President Barack Obama have long argued) that we do have a national interest in Syria, cannot tolerate the indefinite presence of Syrian President Bashar al-Assad and need to recognize that if we mean to check Iranian aggression, we will need to maintain a presence in Syria.

In Rubin’s conception, Iran’s presence in Syria—at the request of the recognized government—is “aggression,” whereas America’s is apparently legitimate.

both sensible and fanciful. It was sensible in that it gave a history of Syria’s grisly war, stated clearly America’s interest in continued involvement even as ISIS is defeated, and outlined policies consistent with those interests. It was fanciful in that the policies outlined would require a much greater measure of American involvement than has been in evidence by this administration—or were committed in yesterday’s speech—to succeed.

For Schake, the problem isn’t that the goal of America’s Syria policy is to illegally occupy a country and overthrow its government, while ratcheting up already dangerously high levels of hostility towards Iran and Russia. It’s that that the Trump administration isn’t doing enough to achieve this.

Meanwhile, accounts of Tillerson’s speech on CNN (1/18/18) and Buzzfeed (1/18/18) opt not to make any reference to the absence of a legal basis for what he describes. One of the few allusions of any kind to international law was a throwaway line in an AP report (1/24/18): “The Islamic State’s retreat also has forced the US to stretch thinner its legal rationale for operating in Syria.” What that rationale might consist of was not explained.

The Best Way to End War Is More War

Tillerson is proposing a prolongation and escalation of the war in Syria. The Syrian government will not passively allow itself to be removed by the US military, and neither will Syria’s allies from Russia, Iran and Hezbollah. So in practice, Tillerson’s policy means a wider, more dangerous conflict.

Yet the Newsweek piece (1/19/18) accepts that the plan is aimed at creating “conditions suitable for the return of refugees and internally displaced persons to their homes”—the opposite of what war produces.

Not only are media outlets failing to address the violence implicit in Tillerson’s policy, they are claiming the opposite and treating it as a plan for peace in Syria. These articles do not explain how a US-led regime change war will achieve that, instead of the years of war and slave markets such policies brought to Libya, or the half million to a million civilians killed in Iraq. 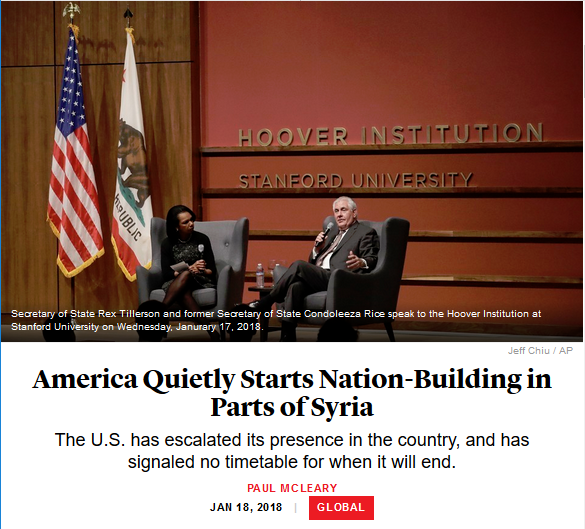 For The Atlantic (1/18/18), attempting to divide a nation is called “nation building.”

These publications take for granted that the US has a right to decide who governs Syria. For example, an Atlantic article by Paul McLeary (1/18/18) characterizes the US plan to maintain an occupying force in Syria and compel the ouster of its government as “nation-building,” though “nation-destroying” is probably more apt.

The Washington Post (1/22/18), similarly, echoes Tillerson’s claim that if the US were to “abandon” Syria, it would be “repeat[ing] the mistake the United States made in Iraq,” when “a premature departure . . . allowed Al Qaeda in Iraq to survive and eventually morph into ISIS.” The Post missed the possibility that the US’s “mistake” in Iraq was invading in the first place, one consequence of which was the birth of both Al Qaeda in Iraq and ISIS.

Critics predictably charge that Mr. Trump is launching another “endless war” in Syria. In fact, the administration has simply recognized reality: The United States cannot prevent a resurgence of Al Qaeda and the Islamic State, prevent Iran from building bases across Syria, or end a civil war that has sent millions of refugees toward Europe without maintaining control over forces and territory inside the country.

The editors go on to write that the Trump administration “has rightly absorbed the lesson that [America’s] way out [of Syria] starts with a serious and sustainable US commitment.”