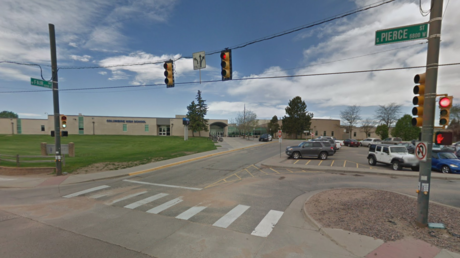 More than two dozen schools were placed on lockout in Colorado, following threats about explosives being planted at Columbine High – the scene of the infamous 1999 school shooting. The alarm turned out to be false.

On Thursday morning, an anonymous caller phoned Jefferson county police and claimed that several explosive devices had been planted inside Columbine High School. “The person claimed to be hiding outside with a gun,” said Mike Taplin, spokesman for the Jefferson County Sheriff’s Office.

In response, Columbine HS, as well as 23 other schools in the area, were put on lockout. Authorities called on people to avoid the area and specifically urged parents not to attempt to pick up their children. All “kids and staff” were reported to be safe.

UPDATE: Attention parents: DO NOT come to Columbine HS right now to pick up students. They will not be released until 2:45pm. They are on lock out at the school (meaning no one can come or go) The kids & staff are SAFE pic.twitter.com/IgeuupoJFm

Large groups of various security forces and a bomb squad were dispatched to the scene. Photos published on social media showed armed officers patrolling the grounds around Columbine HS as well as a neighboring Clement Park, in which there is a memorial to the victims of the 1999 school shooting.

“The perimeter was searched and secured…So far we have not found anything to validate the threats that have been made,” Taplin said, explaining that the alarm appeared to have been false.

Still, all the affected schools were scheduled to remain on lockout up to 14:45 local time (21:45 GMT). The person behind the false alarm has not yet been identified.

In 1999, Columbine High School witnessed a massacre that is still considered one of the deadliest mass killings in US history. Eric Harris and Dylan Klebold, two of the school’s senior students murdered 12 of their fellow students and one teacher, injuring 21 more people. The two took their own lives afterwards.

The incident has inspired a whole online community of “Columbiners” obsessed with the massacre and its perpetrators and led to what has been described as copycat attacks in other schools, in the US and beyond.