Janine Jackson interviewed Richard Kim about Brett Kavanaugh and the antidemocratic Supreme Court for the September 14, 2018, episode of CounterSpin. This is a lightly edited transcript. 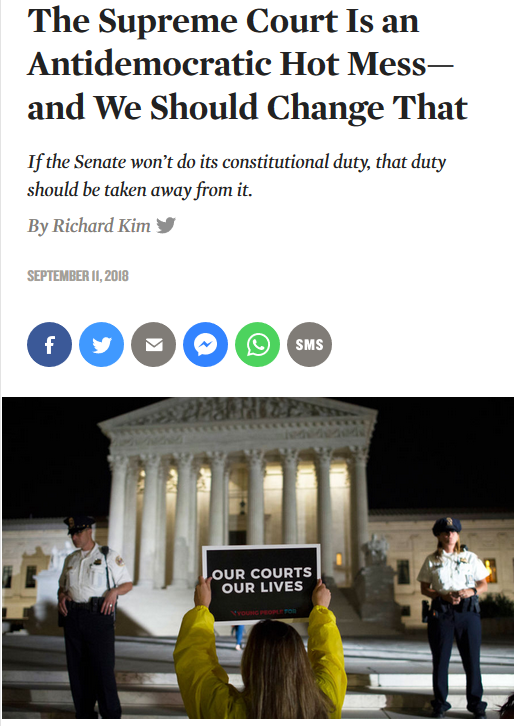 Janine Jackson: Media are certainly reporting the confirmation hearings of Supreme Court nominee Brett Kavanaugh. But there’s a case to be made that stories that just get views from various folks about what it would be like with Kavanaugh on the court, but sidestep serious questions about the process that would put him there, are doing less covering than covering up.

Media get things wrong all the time, but among the deepest damage they do is invisibilizing possibilities, making it seem that things they don’t consider can’t happen. It’s a sort of implicit passivity that permeates corporate reporting, of which the air of “oh well, what’s next”  fatalism  wafting off of much coverage of Kavanaugh is just one example.

Different premises are behind our next guest’s recent piece, headlined “The Supreme Court Is an Antidemocratic Hot Mess—and We Should Change That.” Richard Kim is executive editor of The Nation magazine, where that article appears. He joins us now by phone from here in town. Welcome back to CounterSpin, Richard Kim.

Richard Kim: Thank you for having me on.

JJ: The piece begins, “The United States Supreme Court is, by design, a profoundly antidemocratic institution, and as Republicans get ready to ram Brett Kavanaugh’s nomination through the Senate, it’s worth pointing out that it doesn’t have to be this way.” That for me was a very compelling lead, and I’d just like to ask you to unpack it a little. What, first of all, do you mean by the Supreme Court being “antidemocratic by design”?

RK: So the Supreme Court, when it was formed by the Founders, the Constitution actually doesn’t say that there have to be nine justices. It’s a little ambiguous. They can serve for life, although it’s generally interpreted that way.

But I think the thing to point out here is the justices are appointed by the president of the United States, and that person, the president of the United States, is chosen by the Electoral College—itself an antidemocratic institution that was hatched to protect the interest of slave states. The nominees are then confirmed by the Senate, which is an antidemocratic institution that vastly exaggerates the power of small states over large states. And then the justices, of course, serve for life. And this is not true in any other democracy in the world.

So I really liked how you introduced our conversation. Because I think when we approach the Supreme Court in this battle royale that is happening, we accept the very narrow parameters of how we choose justices today, and it doesn’t have to be this way. It’s not this way in other countries, other democracies in the world. It’s not this way in the United States, either, and that’s the point that I was really trying to make, that there are state supreme courts across the country, and in 21 of them, justices are elected by the people; in 14 others, they are selected by a nonpartisan committee. And so there are many ways to do this, and there are many ways to arrive at a Supreme Court that is going to look at the deep constitutional issues of our society and our law, and the way we have chosen to do it now is, in the grand scheme of things, a very antidemocratic process.

JJ: Yeah, and yet so much media conversation seems to stop at, “well, they should ask tough questions in the hearings,”  you know, “they should ask some hard questions.” And that’s sort of the limit of what might be done.

Well, it’s not true, of course, that Donald Trump introduced hyper-partisanship or extremism to US politics, but with regard to the Supreme Court, things have shifted, in terms of what you call the “uncodified norms” of this process. I wonder, a little history—can you trace the change here, and what’s behind that change? 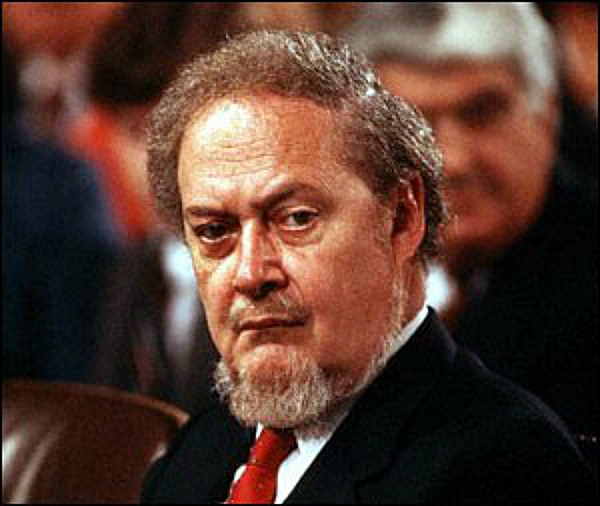 RK: So you have to really go back to the nomination of Judge Bork by Ronald Reagan in 1987, and the verb borking has come about from that nomination. And people on the right use the verb borking to mean defaming a nominee, and just really going after them in unfair ways.

I actually think what happened in the Bork nomination was an appropriate exercise of the Senate’s constitutional duty to vet candidates. People looked at Bork’s record. They saw that it was extreme and way outside the mainstream of American views on civil rights, on abortion, on executive power. That view prevailed, and it led the Senate Judiciary Committee to reject his nomination, and the Senate to follow suit. Six Republicans voted against Judge Bork.

And they also construct a strategy to get them confirmed. And that is, in part, to answer almost nothing. So that’s when we say that we should have tough questions. You see this on the issue of abortion. People keep asking Judge Kavanaugh, does he consider abortion settled law? And Judge Kavanaugh’s able to say, “I consider it settled law.” That reveals nothing to us about whether the thinks Roe v. Wade was correctly decided.

So there are a whole range of views, abortion is just one of them, where the justices’ opinions are really going unexamined. 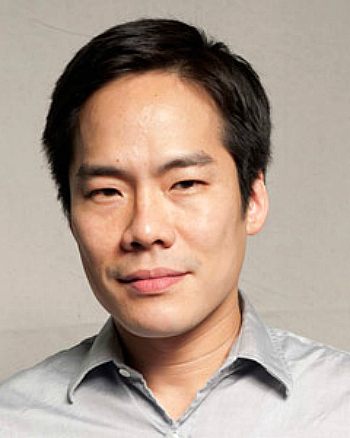 Richard Kim: “There are a whole range of views, abortion is just one of them, where the justices’ opinions are really going unexamined.”

JJ: Well in his case, it seems there’s an actual lack of the kind of documentation of previous rulings that we would expect to get. And is that just something that, like a president putting out their tax returns, where it’s like, “Golly, we kind of thought this would always happen”?

RK:  Right. No, it’s unprecedented, actually. When Elena Kagan went before the court, she also had a very voluminous paper trail. She was in the White House Counsel’s Office, and we saw everything that was there. When Sonia Sotomayor was nominated, her entire judicial record—including things she had written in college—were vetted by the Judiciary Committee.

In the case of Judge Kavanaugh, something like 7 percent of his documents have been produced for the Judiciary Committee. This is an unprecedented level of secrecy and non-transparency from the Republican Party, that have really shielded him. And I think, one of the details about this that just drives me crazy, because I can’t really believe that we’re in this situation, is that, of the papers that are there from his tenure in the White House Counsel’s Office, the National Archive has said that it would take through the fall to go through them and to—you know, there are some security concerns, there are IDs that need to be blacked out—that’s a legitimate process. But they said would take months to do that.

And so, instead, the George W. Bush Presidential Library hired a private attorney, Bill Burck, who was an underling of Justice Kavanaugh’s when he was in the White House Counsel’s Office, and his friend, to privately vet these papers, without any accountability to any elected official. And, by the way, Bill Burck is also a lawyer who represents Reince Priebus, Steve Bannon and Don McCann, the White House counsel, in the Mueller investigation. So this whole thing is just a giant conflict of interest.

And what’s stunning to me is that all has happened in the background, and people don’t seem outraged by it, and the Democrats on the Judiciary Committee are not really making as big a deal of it as I think they should.

JJ: In terms of what you ask in the piece—“Why should any of us accept that an increasingly powerful branch of government is selected in such a manner?”—and the idea of non-acceptance, there’s been some conversation around the reliance, in general, on legal defenses against Trumpism. There’s a piece on Socialist Worker in which Mukund Rathi reminds that “the courts, like other branches of government, are political bodies that respond to the presence or absence of class struggle and social movements.” And I wonder about that piece of it. Because, there’s no lack of frustration, and yet, “write your senator and ask them to ask tough questions” is just not enough for people. What else is there; what’s the space for social action here?

RK: I really think, first of all, if the process itself is constructed to be so antidemocratic, we need to look at that. But then, in the last 20 years, the right has really endeavored to make it even more antidemocratic, even less transparent, even less accountable to the Constitution and the people.

So given that that’s happened, given that there was not a confirmation hearing for Merrick Garland, who was Barack Obama’s appointee to the Supreme Court, I think everything is on the table.

You know, there’s nothing in the Constitution that says we have to have nine members. Why not 11? Why not 13? Roosevelt famously tried this with the court-packing scheme, which I will note The Nation referred to this as a “court reform plan,” not “court-packing scheme.”

But there are also many good solutions that come from legal scholars. You could have term limits, and many people have agreed that 18 years is a good number to serve on the court. It ensures some stability, but it also ensures a regular turnover, so that each time we have an opening, it doesn’t get slotted into this sort of battle royale that’s going to shape American law for a generation.

There is a greater role that you can give to impartial legal committees, and this is something that happens in Canada and Japan and other countries, where their version of the Bar Association really looks at and puts forward a slate of justices, and then the chief executive picks one.

So there are a lot of different ways we can do this, and part of why I wrote the piece was to really widen the aperture of what is possible.

JJ: Absolutely, and I would just add that for media to use that wider aperture would make these things seem possible to people.

JJ: We’ve been speaking with Richard Kim, executive editor of The Nation magazine. You can find his article, “The Supreme Court Is an Antidemocratic Hot Mess—and We Should Change That,” on TheNation.com. Richard Kim, thank you so much for joining us this week on CounterSpin.

RK: Thanks so much, Janine.