As the number of British youngsters struggling to make it onto the housing ladder and trapped in zero-hour contracts hits a record high, a think tank has now suggested paying each millennial £10,000 ($13,500).

The Resolution Foundation’s intergenerational commission, which has been researching ways to plug the generation gap between millennials and baby boomers for the past two years, suggested the grant – dubbed ‘citizen inheritance’ – should be given to Britain’s young people once they hit the age of 25.

The report suggests there is an unprecedented amount of British youth struggling to acquire property and in precarious zero-hour contracts, while baby boomers have had it easier than any subsequent generation when it comes to housing and pensions. The grant would, in their eyes, help redistribute wealth across society. 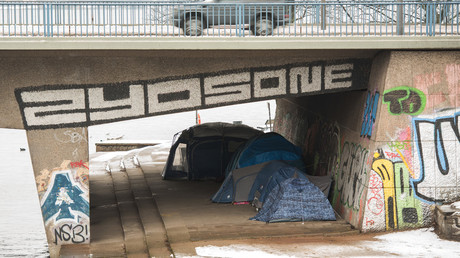 “Younger generations are bearing more risks and holding fewer assets than their predecessors,” the report states. “We need to redress that imbalance if we are to maintain the promise of an asset-owning democracy.”

The grant would be funded by an inheritance tax on what older people pass on to their children.

Some young people, however, raised doubts over the effectiveness of the payout.

Nikeh Gray, 29, and from London, told the Guardian that she would probably splash her money out on shopping if there were no restrictions.

“I would have a big smile on my face. With no restrictions it would be gone in a month, but with the restrictions, how would it help me?

“£10,000 is not even enough for a deposit and I don’t want to deal with my pension until I am in my late 30s. I won’t think that far ahead. But if there were no restrictions I would be straight down to Selfridges.”

But the commission said it could only be used for housing, education, starting a business, or towards a pension.

Matilda Morgan, 23, from Petersfield, welcomed the suggestion, saying: “Having that amount of money at 25 would change your ability to afford a house. Maybe you could put it into a bond while you get the rest of the money together. What the older generation don’t understand is that while the minimum wage helped people afford things for a while, that’s not the case now. I gave up on buying a house a few years ago because I realised I would never afford it.”