Janine Jackson interviewed Phyllis Bennis about the Gaza massacres for the April 6, 2018, episode of CounterSpin. This is a lightly edited transcript. 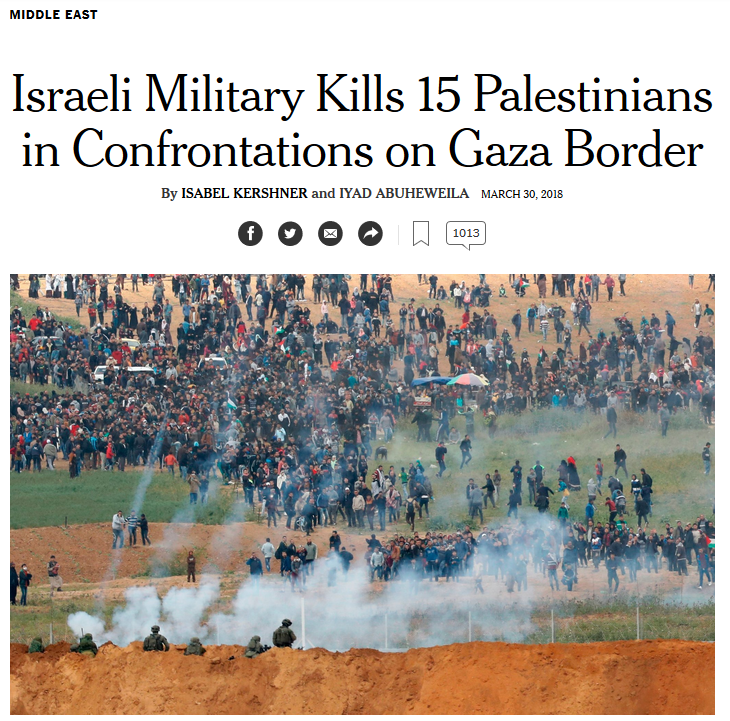 Janine Jackson: The March 30 New York Times headline, “Israeli Military Kills 15 Palestinians in Confrontations on Gaza Border,” was refreshing in its avoidance of the passive voice often used to describe such things. But then the word “confrontations” returns us to that sense, that media coverage of Israel and Palestine often gives, of a symmetry of equally powerful forces. Indeed, a subsequent Times editorial, after the death toll had risen to 17, with more than 1,000 Palestinians wounded, would call on both “Israel and the Palestinians” to “act with restraint,” or, the paper said, “both sides could face a new catastrophe.”

Joining us now to give us some context for recent events in Gaza is Phyllis Bennis, director of the New Internationalism Project at the Institute for Policy Studies. She’s author of many books, including Understanding the Palestinian/Israeli Conflict, now in its sixth, updated edition. She joins us by phone from Washington, DC. Welcome back to CounterSpin, Phyllis Bennis.

Phyllis Bennis: Great to be with you, Janine.

PB: Sure; I would just point out one additional point, though, about the Times coverage. The article that you were talking about, the title which avoided this usual way of not talking about Israeli obligations and Israeli responsibility, was not reflected in the print edition. The print edition Saturday morning, although there was a huge, four-column wide photograph of Palestinian protesters, the title is, “Confrontations at Gaza Fence Leave 15 Dead.”

Now, it wasn’t “confrontations” that killed those people—it’s now up to 18, as we know—it was the Israeli military. And the caption on the photograph describes how “demonstrations quickly turned violent.” Well, the demonstrations never turned violent. There were a few stones thrown. There were two people who allegedly were seen with guns at one point. No one on the Israeli side was hurt. Whether those guns were ever fired, we don’t know. There were somewhere around 30,000 people at this protest. So to call the fact that one or two people were seen with a gun, that may have never been fired, “the demonstrations turned violent” is really a deliberate misstatement of what happened.

These protests, Janine, had two basic reasons. The long-term one had to do with the Palestinian right of return; 80 percent of the Gaza population are refugees. And this year is the 70th anniversary of what the Palestinians call the Nakba, “the Catastrophe,” which is the expulsion of 750,000 Palestinians from their home in 1947 and ’48, that led to the creation of the state of Israel. And, of course, they’ve never been allowed to return since.

So this was partly about putting the right of return, not as an immediate demand—“we want it today”—but as a recognition, in the eyes of the world, that this is still an unrealized right of the Palestinians under international law, according to UN Resolution 194. In all of these ways, the Palestinians have the right to return. It is still being denied 70 years later, and “we’re still here to remind you.”

The immediate date had to do with an anniversary of what the Palestinians call Land Day, which was a protest back in 1976, when Israel was at that time, as it is now, continuing to expropriate Palestinian land. In this case, it was a large part of land in the Galilee, inside Israel, and there were lots of protests by Palestinian citizens of Israel. Six of them were shot dead by border patrol agents, which was unprecedented at that time, for Palestinian citizens to be shot in cold blood like this, and as a result, every year on March 30, Land Day is commemorated for that continuing, nonviolent fight for the land. So the date of the beginning of what is anticipated to be a six-week nonviolent protest began this year on Land Day. It was the combination of those two things that led to the protests.

JJ: What you’ve just described sounds very different than the characterization that was pretty pervasive in media. NPR had it, “Tens of thousands of people in Gaza answered the militant group Hamas’s call to protest.”

PB: Yeah, it’s extraordinary. That was picked up all over the place, that Hamas was somehow the originator of this thing. It wasn’t. This was Palestinian civil society in Gaza, which is very vibrant, despite the horrific conditions, where 97 percent of the small amount of water that’s available is undrinkable, electricity is only available between two and four hours a day, the sewage system has never been rebuilt after the 2014 assault by the Israeli military, with the result that the beaches have been fouled. It’s a horrific catastrophe of humanitarian crisis in Gaza, and yet there are these very vibrant social movements and organizations, women’s organizations, trade unions, youth organizations, sports clubs…. All of these were involved in calling for this protest.

The protest organizers asked for endorsement and support from all the political parties, and got it. They all signed on: Fatah, Hamas, all of them. And because Hamas controls—to whatever degree it exists, which isn’t much, but—to the degree to which a governing structure exists in Gaza, it is controlled by Hamas. They’re the ruling party. They won the elections in 2006. And in that context, they provided bus availability to get people to the area where the protests were happening, that sort of thing; but the idea that this was somehow called by Hamas is simply not true.

Hamas rarely calls for this kind of mass protest, largely because they don’t control it. And there’s a lot of discontent in Gaza with Hamas, as with Fatah, in the context of the much greater anger at Israel, for the years of occupation and siege and this long-standing blockade that’s been underway, that prevents Palestinians from having a functioning economy, from having clean water, from being able to travel, from being able to escape from what many around the world have called an “open-air prison.”

JJ: Conversations around Israel/Palestine can be so Manichean; people simply say: “Oh no, you’re wrong. Actually, these protesters are all violent, and they don’t believe that Israel should exist.” And what I’m thinking of, in particular, is Israel’s ambassador to the UN. You’ve just described, and we sometimes hear about, humanitarian conditions within Gaza. Israel’s ambassador to the UN has a letter in the Times, saying, “We’re not responsible for the well-being of the people of Gaza.” I mean, stating that as a simple fact. So how does one make sense of something like that?

PB: I think the problem is that the Times lets him get away with that. You know, if I wrote a letter like that, I think it would probably be factchecked.

To say, “Uh, excuse me? Hasn’t Israel, in fact, imposed a blockade in which all the entrances and exits are controlled by Israel? There is no alternative way for the Palestinians to, for example, bring in either humanitarian or commercial goods to rebuild the water treatment or sewage treatment plants. Isn’t it true, Mr. Ambassador, that all of those entrances remain, to this day, under Israeli control, except for the one at Rafah, which is controlled by Egypt, which has agreed with Israel to keep it shut also?”

This isn’t rocket science. This isn’t brain surgery. This isn’t hard. The reason the Israeli ambassador can make a statement like that is simply because no one challenges him. 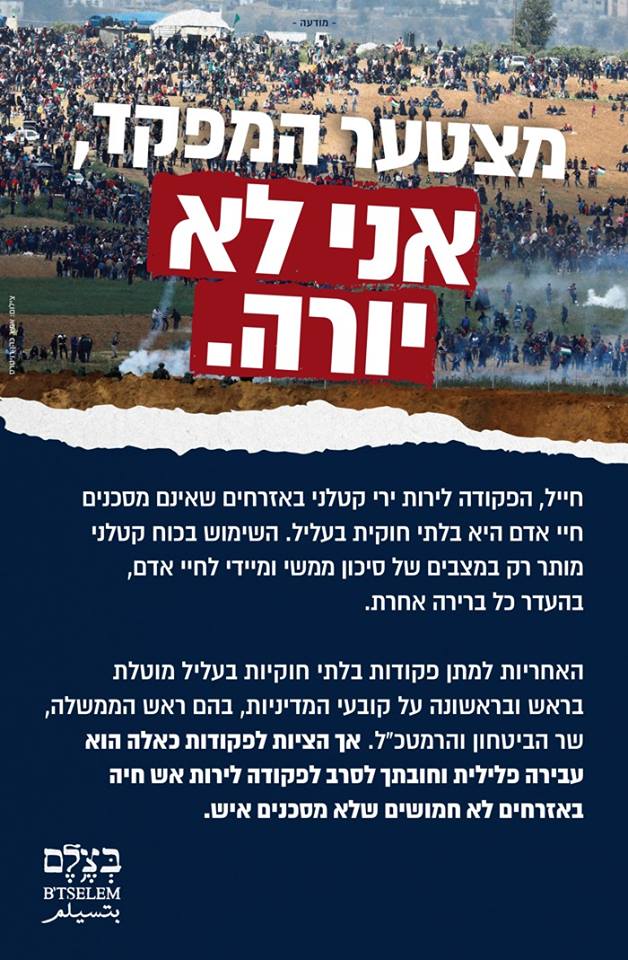 I think what is important right now, and what’s not getting enough attention, is the fact that Israeli human rights organizations, one in particular, B’Tselem, the very respected, longstanding human rights group inside Israel, started a campaign yesterday that is absolutely unprecedented.  In a set of ads around the country, they are calling on Israeli soldiers to deliberately resist orders to shoot to kill.

They’ve used the term “patently illegal” to describe these orders to shoot anyone approaching the fence, and the reason that that phrase is so important, it has a particular history in Israeli military law. In 1956, there was another massacre of Palestinians in a village called Kafr Qasim, very well-known massacre site, and on that occasion, the village had been put under a sudden curfew by the military, with virtually no announcement, and the border patrol agents were told by their commanders, “Shoot to kill anyone who comes outside his home or her home,” and the border police went along with that, and they fired and they killed 47 Palestinians.

These were Israeli Palestinians. This was inside Israel in 1956, and that time there was a legal challenge, and the judges found that the order to shoot was what they called “patently illegal,” and they went on to define what that meant, in saying that what the soldiers were essentially trying to use was the Nuremberg defense: “I was just following orders.” And the judges said that’s not OK, and that an order that is patently illegal must be disobeyed, and they described what that means, saying, and I’m quoting the judges here, Israeli judges:

We’re not dealing with a formal, hidden or not, illegality, not one seen only by scholars of law, but a clear and obvious illegality, a certain and essential illegality of the order itself, an illegality which pierces the eye and enrages the heart, assuming the eye’s not blind and the heart is not made of stone or corrupt. 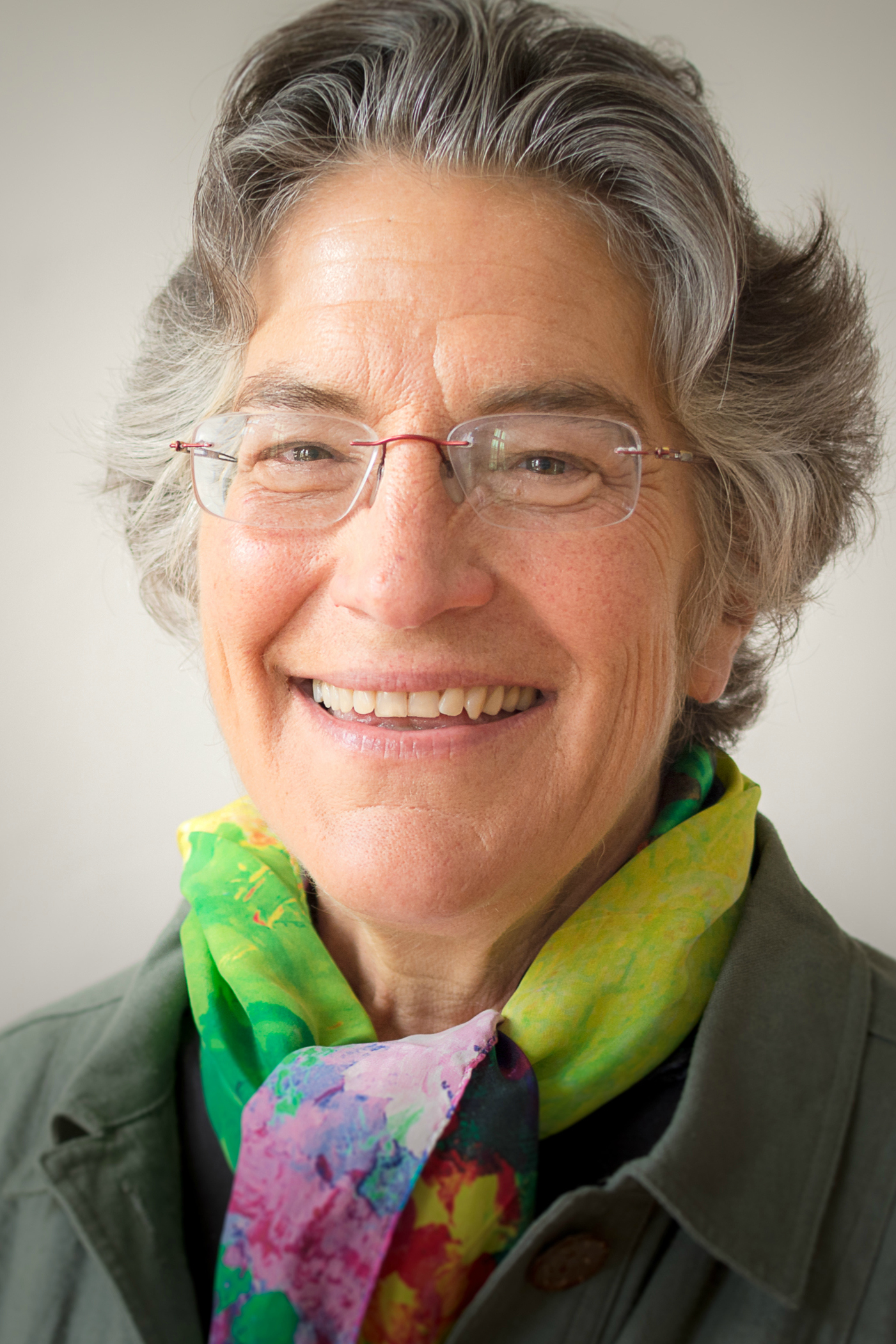 Phyllis Bennis: “The idea that you can shoot anybody who approaches the border fence on their own side of the border, when no one is at risk, there is no danger to life, there is no mortal threat, which is the only basis on which live fire can be used—it’s patently illegal.”

It was an extraordinary, almost poetic description of how outrageous and how obviously illegal this order was: “Kill anybody outside their home in their own village,” you know? The same way, the idea that you can shoot anybody who approaches the border fence on their own side of the border, when no one is at risk, there is no danger to life, there is no mortal threat, which is the only basis on which live fire can be used—it’s patently illegal, and using that term is a very important one.

Now, the sad reality is that neither B’Tselem nor the other brave Israeli human rights organizations have very much influence these days, as the political discourse inside Israel has moved so far to the right, unfortunately particularly among young people. But it is important for the international community that Israeli human rights defenders themselves are actually calling on their own soldiers to defy these illegal orders. That puts the human rights activists themselves, at B’Tselem, at great risk, and their willingness to take that risk, of isolation at the very least, if not potential legal consequences, it speaks to how serious this set of violations is, and speaks to the obligation of the international community to answer it.

JJ: We’ve been speaking with Phyllis Bennis, director of the New Internationalism Project at the Institute for Policy Studies and author of, among other titles, Understanding the Palestinian/Israeli Conflict, now in its sixth, updated edition. Phyllis Bennis, thank you very much for joining us this week on CounterSpin.