Janine Jackson interviewed Suman Raghunathan about Donald Trump’s revived Muslim ban for the December 22, 2017, episode of CounterSpin. This is a lightly edited transcript. 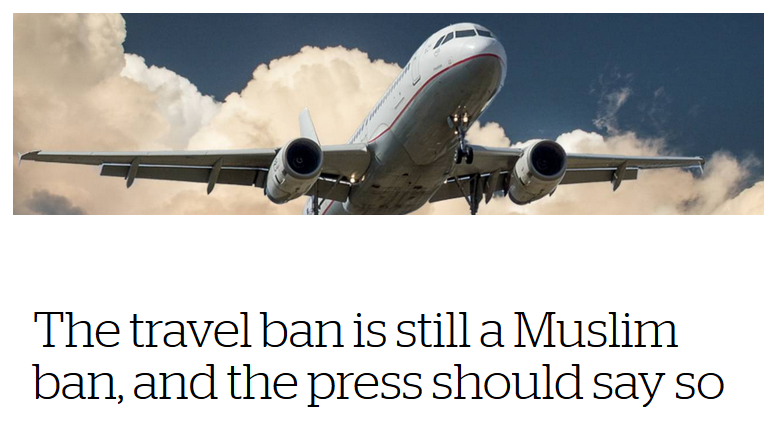 Janine Jackson: The fact that candidate Donald Trump called for a “total and complete shutdown of Muslims entering the United States,” and that President Donald Trump called for a ban on Muslims entering the United States—the latest version blocked people from eight countries, six of them Muslim majority—presents a question for journalists: How credulously do you treat the White House claim that the ban isn’t about religion? You would think it wouldn’t be a hard question, and yet, as John Alsop at Columbia Journalism Review noted, a number of media who referred to a “Muslim ban” when it was first introduced have been seen to be blanding things out now to “travel ban.”

The Supreme Court’s December 4 decision to allow “Muslim ban 3.0,” as it’s been dubbed, to be implemented, even as challenges to its constitutionality make their way through the courts, certainly risks normalizing, legitimizing, the ban in the public eye, making media’s scrutiny of the policy that much more critical. Joining us now to talk about these issues is Suman Raghunathan, executive director of SAALT, South Asian Americans Leading Together. Welcome to CounterSpin, Suman Raghunathan.

Suman Raghunathan: Thank you so much for the opportunity to be here.

SR: Absolutely, Janine. We cannot underestimate the impact of codifying discrimination and deepening a separation between those who are Muslims, Middle Eastern, Arabs, South Asians and the rest of the country. SAALT has been looking at hate violence and, indeed, the relationship between hate violence and xenophobic political rhetoric for the better part of a decade, and what we’ve seen increasingly over the last several years has been a  deep and intertwined relationship between xenophobic political rhetoric and its impact to really spur and encourage hate violence. 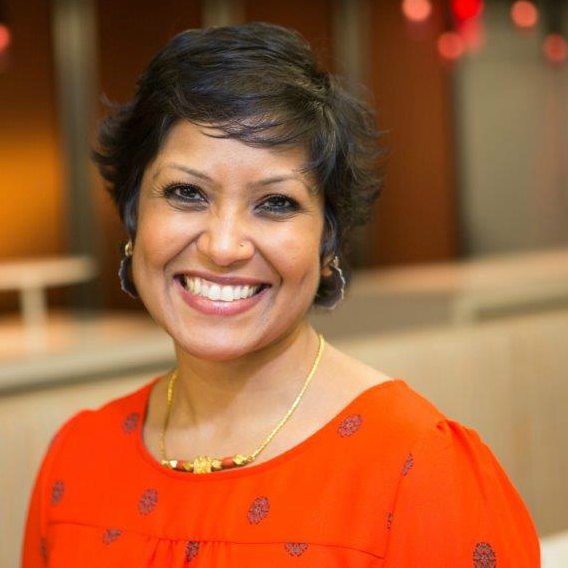 For several years, we weren’t able to draw a direct relationship between the two, and we were very careful to not do so, because we didn’t yet have enough data. And yet in the last year to 18 months, we’ve seen an increasing number of studies that really bear out the relationship that SAALT had been suspecting for quite some time, which is that when our elected and appointed officials, and those who aspire to be elected and appointed officials, poison the nation’s political debate and our national conversation on communities, indeed our communities, which is an incredibly diverse spectrum of folks in this country, right, so they include South Asians, Muslims, Arab Christians, Middle Eastern communities. When we have individuals who call into question the very place and viability of protections afforded to all of those folks in the country, then we know that that indeed spurs violence against our communities.

We’re in the process of finalizing an analysis of hate violence and xenophobic political rhetoric since the election, right, so roughly over the last year.

SR: And what we’ve increasingly found is an even deeper relationship between the policies and views espoused by President Trump and those of his administration, and acts of violence against our communities, which are reaching levels that we only saw in the year immediately after the events of September 11. We’re seeing over a 50 percent increase in the number of documented hate violence incidents since the November 2016 presidential election, relative to the previous year. So the level of violence and the surging tide of violence really spurred by, encouraged by and enabled by the views and political rhetoric coming out of this administration, and of policymakers, is really contributing to an increasingly problematic and toxic discourse at a national level about our communities.

And it means something when David Duke applauds explicitly anti-Muslim tweets from the president, and that’s sending a message, indeed, to many individuals in the white supremacist movement in this country that their views and their actions are believed in, echoed by and implicitly supported by those who should do better.

JJ: Let’s move on to the resistance, finally. What do you see as the most effective ways for people to resist these attacks on community, and what role do journalists or do media play in that?

SR: Well, let me take the answers to that question in reverse order.

SR: So you I think referred to, in the setup as well, the important role that media have played to really soften the blow or the impact of what is a Muslim ban, to refer to it as a travel ban. I think it’s crucial that in particular journalists really put a priority on understanding, and really covering on the ground, the impact of these plainly discriminatory policies, which are, to be clear, not only policies or attacks against Muslim, Arab and South Asian American communities, but a really wholesale attack on immigrants, as well as communities of color writ large.

SR: The decision to end DACA and the intransigence on the part of Congress to enact the Dream Act, which would make a huge difference for, of course, nearly 800,000 undocumented Dreamers, but would include a significant share of South Asians, right, I think all of these dynamics and policies have a tremendous impact on communities on the ground. And it’s crucial that journalists not only call a spade a spade, particularly around drawing a connection between the explicit aims and goals of restrictionists and of white supremacists who are currently occupying, and have occupied, positions of power in this administration, but also really connecting the dots between those policies and their impact on the ground.

SR: I also think that, in terms of the resistance, we have seen a tremendous amount of resistance, right. The reality on the part of organizers and grassroots communities, that all of these attacks are attacks on all of us, has been an incredibly inspiring and hopeful reminder of the need for us to build strong coalitions and of the need to continue to call out, not only the administration, but also those who are informing the administration’s efforts to explicitly target our communities.

JJ: We’ve been speaking with Suman Raghunathan, executive director of South Asian Americans Leading Together. You can find their work, including their statement in response to the Supreme Court’s recent decision, on their site SAALT.org. Suman Raghunathan, thank you so much for joining us today on CounterSpin.