Janine Jackson interviewed Dedrick Asante-Muhammad about the racial wealth divide for the August 10 episode of CounterSpin. This is a lightly edited transcript.

Janine Jackson: Last September, elite media were heralding numbers suggesting that incomes were up among middle class Americans, but tiptoeing around the fact that the rising tide was not lifting all boats. Dedrick Asante-Muhammad is Senior Fellow, Racial Wealth Divide, at the group Prosperity Now. He told CounterSpin about a report he co-authored, called The Road to Zero Wealth: How the Racial Wealth Divide Is Hollowing Out America’s Middle Class, from Prosperity Now and the Institute for Policy Studies.  I asked why they chose to focus on racial disparities in wealth.

Dedrick Asante-Muhammad: I think wealth as a foundational economic indicator is very important. Wealth tells a stronger story about where people are situated socio-economically. Wealth is what allows people to ride out or deal with challenging economic times, which we all go through. Wealth is what allows you to take advantage of opportunities that might put you in a better socio-economic position in the future, whether it’s starting a business, money to buy a home, money to go to higher education with less debt. And so we see that wealth is a much stronger indicator of socio-economic status, and we think this is what needs to be looked at more often to help us understand how the economy’s doing.

And let me point out, related to the article you previously mentioned about middle income being at the highest it’s been, and that we’ve kind of recovered from the Great Recession. I think it’s great, you know, we need strong incomes, we need strong employment figures, and racial minorities, blacks and Latinos in particular, still have great divides in income and employment. 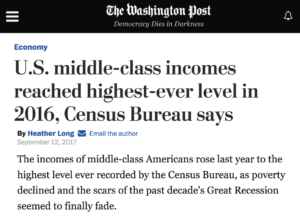 The Washington Post proclaims an economic recovery for the middle class, but ignores the racial wealth gap. (9/12/17)

JJ: So the numbers and the information in this report, there are a number of different ways that you come at it, in terms of data. But what can you tell us about the size of this gap in wealth according to race?

JJ: Before I ask what drives the wealth gap, what doesn’t drive it, that people might think does?

DAM: That’s an interesting question. There’s been some reports coming out recently, from some Yale authors, about how it’s interesting that higher-income whites are those who seem to be most off in understanding the economic difference between blacks and whites, historically. And the Yale authors point to this idea that when people are economically successful, they like to believe that a system is working. And so then they must assume that when people aren’t doing well, there’s something that they aren’t doing right, and they will underestimate inequality.

And I think in general, in terms of economic differences and with wealth differences, there’s some belief that, well, if African-Americans or Latinos, whatever group you want to focus on, would just use their money better, that they would be in a much better economic situation, versus that maybe something structurally has been driving the inequality that’s existed throughout the history of the United States. And I think we can point to what has structurally helped create the wealth divide, and what is a challenge to the American middle class as a whole.

JJ: Yeah, you often hear about, well, if communities would value education…. You know, that educational attainment is really the difference between lacking wealth and having wealth.

DAM: That’s one thing we highlight in the report as well, is we highlight that even if you look at educational attainment, you see there’s massive wealth disparities. We see that whites with a high school diploma have more wealth, almost twice the wealth, of blacks and Latinos with a college degree. So education in itself does not at all bridge the racial wealth divide.

And, too, if you look back, again, median wealth for blacks is $1,700, median wealth for Latinos is $2,000. That’s a very small amount. A minor car accident will wipe that away. That might cover your salary for a week or two, depending on what you’re paid. So there’s not much room for any type of error or crisis or setback, and not much money to take advantage of opportunity. That won’t pay for a semester of college almost anywhere. So we see when you have that little, there’s very little you can do to actually advance your economic fortunes, when you’re stuck at a $1,700, $2,000 median wealth that seems to be on the decline.

JJ: You sort of hinted toward it, but here’s where we do need to know some history. Because when you hear about the creation of the middle class in this country, it wasn’t just history’s inevitable march, you know. When we’re talking about structural drivers, there was policy behind that, right?

DAM: No, absolutely. Many people might assume that the country has always historically been a large middle-class economy, and that’s not true. And it wasn’t just market forces that created a strong middle class, and it wasn’t just market forces that created, in particular, a strong white middle class. The majority of whites did not become homeowners until the ‘40s and ‘50s, after the New Deal, following the Great Depression, helped create a strong social safety net to help all Americans, and white Americans in particular, to get back on their feet after the Great Depression, and provided things like Social Security and other things to help people, and actually even work opportunities to help people stabilize themselves economically.

And then this was followed up with a very strong economy post–World War II, with a lot of the benefits of becoming a victor in a global war, and with this policy, like the GI Bill, that did massive investment in social infrastructure, and massive subsidies for higher education, home ownership. As we know, in the ’40s and ’50s, we had outright legal segregation, outright legal discrimination, that prohibited African-Americans and other people of color to benefit from this mass investment that helped create the middle class, that made whites the majority of homeowners for the first time, that made the American economy a strong middle-class economy for the first time. Blacks, Latinos, Native Americans were not able to get that type of investment. And my analysis is without that investment, blacks, Latinos and Native Americans, and other people of color, never will be able to catch up to the historic strong white middle class that we like to think back upon.