A Vermont man has erected a 315kg statue of a middle finger, visible from all over his town, as a gesture of spite after ten years of having his construction dreams thwarted by town officials.

Ted Pelkey commissioned the cheeky sculpture in October as an act of revenge on the Westford, VT town officials that have blocked him from constructing a garage on his property for 10 years because – he says – they’re “biased against him.” He had it mounted on a five-meter (16-foot) pole, complete with two floodlights, and there it has stood in all its obscene glory since the beginning of the month.

If you don’t want to look at the building, look at this. 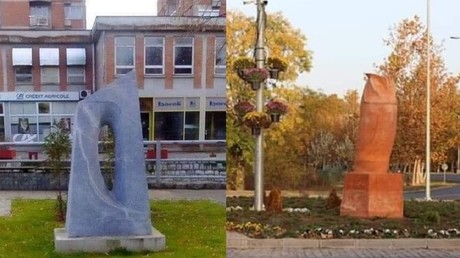 Pelkey initially feared he’d be forced to take down the wooden gesture, since billboards are illegal in Vermont and the sculpture is visible from nearby Route 128. Finding out it was legal as “public art” – since it’s not technically a “sign” – was “the most wonderful thing I’ve ever been told in my life,” he said.

Even the Westford Selectboard the gesture is directed at can’t find fault with it. “He can apparently do what he’s done,” said Selectboard chair Allison Hope.

Pelkey, who owns a truck repair and recycling business in nearby Swanton, has dreamed of building his business a new home on his land in the form of a 740 square meter (8,000 square foot) garage, but town officials have turned down multiple permit applications. While he admits his initial proposal might have been a bit light on the required specs, he paid an engineer and a lawyer to help with the most recent submission – only to be rejected again last fall.

So, a man in Westford, VT built this 700 lb giant middle finger on his property to protest the town’s planning department (for denying him a permit to build on his property). The kicker? It’s now considered “public art” and they can’t make him take it down. pic.twitter.com/4Dv9U7yQa8

The board claims his proposal was missing information about the structure’s use and security lighting, and Pelkey is appealing the decision. The only explanation he can see for the continued rejection is bias, stemming from a “personal grudge” with one official and “residual small-town animosity” with others.

Chairperson Hope, who joined the board within the last two years, insists Pelkey is being treated like any other applicant, even though she’s heard he has subjected past Boards to “animosity and threatening language.”

The two parties met for a mediation session months ago, but no decision was forthcoming, and Pelkey finally ran out of patience. The idea for the sculpture came to him during a chat with his wife. Some $4000 later, voila: a star is born. It even has its own Facebook page.

Pelkey wants his neighbors to know that it isn’t directed at them. “It is aimed directly at the people who sit in our town office,” he emphasized.