Janine Jackson interviewed Amrah Salomón about the limits of Indigenous Peoples Day for the October 12, 2018, episode of CounterSpin. This is a lightly edited transcript.

Janine Jackson: The second Monday of October has passed, and listeners may have noticed that there was less “In fourteen-hundred and ninety-two, Columbus sailed the ocean blue” than they might remember from the past. More and more cities, states and colleges have officially changed the day’s name to Indigenous Peoples Day, in acknowledgment that Columbus’s legacy of mass murder, rape, invasion and enslavement is nothing to celebrate.

Challenging the glorification of someone who did such horrific harm is welcome. But changing the name of the holiday might give some the impression that that harm—which is ongoing—has been addressed. And that wouldn’t be just untrue, but unhelpful.

Our next guest is among those asking that, even should the whole country go along, we think more deeply about declaring Indigenous Peoples Day a completed intervention.

Amrah Salomón is a writer, educator and community-builder. She’s a doctoral candidate in ethnic studies at the University of California/San Diego, where she directs the UCSD Community and Labor Project. She joins us now by phone from California. Welcome to CounterSpin, Amrah Salomón. 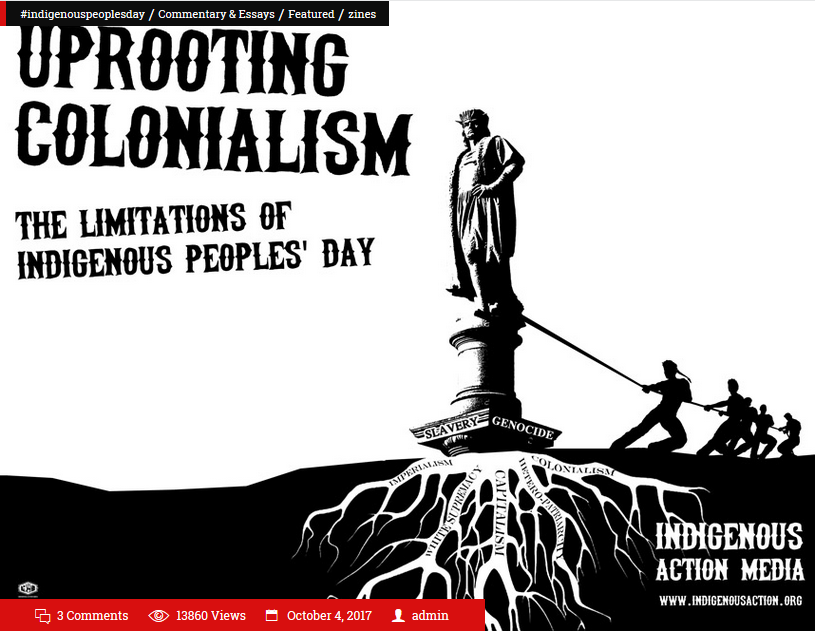 JJ: I read this thoughtful piece from last October by Indigenous Action Media, which states, “We’re all for removing colonial symbols and nationalistic myths, so long as structures such as colonialism and racism go along with them. Problem is they are not.” Is it that gap between symbol and reality that’s at the core of your concerns around Indigenous Peoples Day?

AS: Definitely. I think those of us who worked on this piece together and were in conversation about it, we’re all for the abolition of Columbus Day. And we were talking about, at the time, the movement around the country also to take down Confederate statues, to take down statues of Columbus. And so we were thinking about not just holidays, but also these physical examples that are in our daily lives, such as these statues and Confederate flags and things that are all around us.

And we were concerned that removing the symbol didn’t really get to the core issue that we felt needed to be addressed, which was the abolition of those systems that the symbols represented. Even though the symbols themselves are very traumatizing to black and indigenous and Latinx people, who’ve been at the brunt of 500 years of colonialism, who’ve been suffering from genocide, slavery, heteropatriarchy and extractive capitalism. We didn’t feel that just removing the symbols really addressed that historical trauma, and it definitely didn’t address the fact that those systems still are the structure and foundation of this country.

JJ: We’ve heard it said, earnestly, “Yes, but it’s a step in the right direction.” But certainly, in the corporate media, anyway, taking down of statues, changing the names of holidays, is presented as a “dethroning,” and a controversial one at that—you know, it’s still up for debate—and not as part of any plan of action. In other words, it is not seen as a piece of something larger; it’s kind of the endgame. 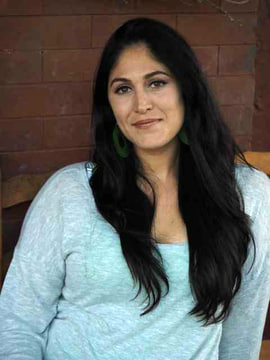 Amrah Salomon: “Removing the symbol of those things, it allows us to open conversations, but those conversations need to lead towards concrete actions.”

AS: Yeah, and that’s the problem, is that for most of us who—especially those of us in indigenous communities—who are experiencing these overwhelming statistics: that indigenous women are more likely to experience disappearance, sexual assault, murder, domestic violence, than any other category of women; or that Native people are more incarcerated than any other category, or more likely to experience police brutality. Those are the goals that we want to focus on: the end of heteropatriarchy, the end of rape culture, the end of the mass incarceration of people of color and indigenous people, the end of police brutality. And removing the symbol of those things, it allows us to open conversations, but those conversations need to lead towards concrete actions.

You know, I think there’s two ways that folks react to it. On the one hand, I’m not criticizing indigenous people who participate in those actions, because I think for Native people who participate in it, what they’re doing is re-occupying space that has been stolen. And so what they’re doing is, not just declaring that we’re still alive, that we’re still here, but also that we have concerns, right? That we have concerns that matter, that need to be addressed still, and there’s something about that reoccupation that’s empowering for them.

But the way that I see institutions and cities take up the holiday is exactly opposite of that intention, of reoccupation; it’s more like this multicultural consumerism that just puts the exoticism of indigenous culture on display for settlers to consume. And that’s inherently disempowering.

JJ: It shouldn’t be too hard for people to imagine a city “honoring” and “recognizing”—on paper—indigenous people, while at the same time desecrating sacred sites, or polluting land and water, or defunding social programs. And so, you have to think about: it isn’t just that it isn’t enough, it actually can provide a kind of cover for those kinds of behaviors.

AS: And in most cases it does. I think if you look at large cities, like you look at—the first Indigenous Peoples Day, was in Berkeley, California, and there’s been, since that time where the day was commemorated, ongoing desecration of Ohlone land, desecration of graveyards, desecration of sacred sites, marginalization of the indigenous people there. And you see that everywhere else that it’s been taken up, in Los Angeles and Phoenix, across the board, that the holiday is just used as something to make settlers feel like they’re doing something without actually doing something. 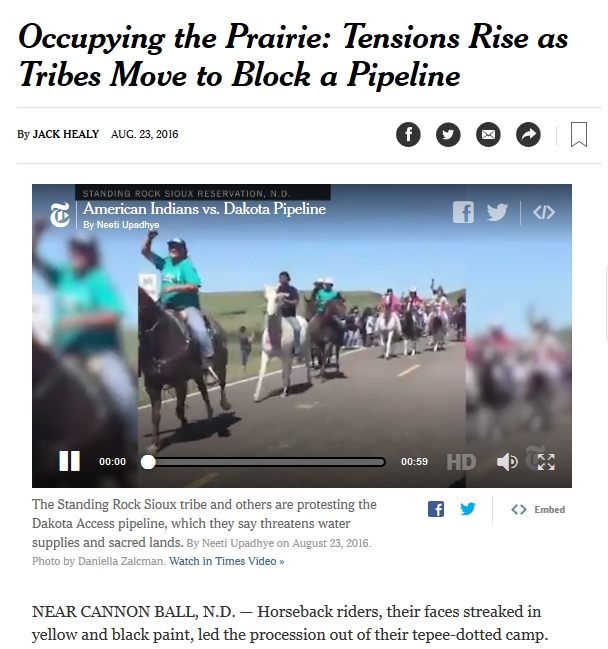 JJ: I remember a New York Times story around the Dakota Access pipeline struggle, in which the reporter talked about how indigenous people want to, or think about, going back to a time “before treaties.” Which, first of all, of course, what many would want is for treaties to be honored. But I thought it represented a pervasive kind of vague sympathy that we see, that’s in fact dismissive and even infantilizing.

It’s like, “Oh, wouldn’t we all like to go back to a time of clean water, when we were as one with the Earth, but alas, we’re grownups, and we know that that’s just silly.” It was a throw-away phrase in this article, but it seemed to me to represent a lot about how you can sort of throw sympathy towards a group, while at the same time suggesting that they don’t really have concerns that need to be actively addressed.

AS: Yes. I mean, on the one hand, it reinforces negative stereotypes, like the noble savage. But it also reinforces this idea that indigenous people are a race to be included and to be visibilized, like our culture is there for settler consumption, versus indigenous nations having sovereignty, and having the first rights to this land, and also the right of self-determination, the right to protect our own people.

So it kind of elides all of those concerns that fall into, broadly, the work of sovereignty, broadly the work of decolonization or abolition.

JJ: Many people are, if not literally young, newly aware in their own experience, newly becoming aware of the deeply painful history of this country, and its ongoing effects and its daily reproduction. And it is very difficult knowledge to hold.

What would you tell them about what it would take to make Indigenous Peoples Day campaigns not a mere rebranding, but actual platforms for struggle?

AS: And I think people are trying to do this. So I’m going to say this, and I’m also going to acknowledge that there are many indigenous people actually working on this, and actually trying to strategize, “How can we use this holiday in a more effective way?”

So one of the things is that, I think if we’re trying to change the relationships—the social relationships that are constructed by colonialism, by the ongoing processes of genocide, mass incarceration, slavery, heteropatriarchy—then we have to start with the truth. If you think about any authentic relationship, it’s built on truth. We have to be able to share the actual truth of what happened.

And some people use the holiday as a platform to try to get those messages out there. Some people are trying to use it as this educational opportunity to really confront the truth of what happened and what is ongoing, what is still happening.

But I think beyond that, it has to be more than just educational as well. Our relationships with each other actually need to transform. And so it does need to be part of a larger process that manifests in actual, material change. Material change in our socializations, material change in our policies, the policies of these schools, these cities, that are honoring, or claiming to honor, people, need to change; their policies toward indigenous people and towards the land need to change.

JJ: We’ve been speaking with Amrah Salomón. You can still find the piece, “Uprooting Colonialism: The Limitations of Indigenous Peoples Day,” on IndigenousAction.org. Thank you, Amrah Salomón, for joining us this week on CounterSpin.