In many ways, utilizing occult or Illuminati symbolism here in 2018 has become quite trendy. Whether it be intentional, as per ‘rules of the Illuminati,’ to gain the consent of the masses, or whether it is entirely a pop culture/trendy display that is innocent and unassuming, it’s common.

When I say ‘the rules of the Illuminati,’ I’m referring to what has been called their religion or set of guidelines they believe they must follow. Given that their actions would be imposing on the free will of global citizens, having to disclose what they are doing to humanity to gain permission, or consent, from them is precisely why they use so much symbolism and ritual in the public eye. Further, since it is their religion, they attempt to make it popular and trendy. We see this today with the rise of pop-y and trendy witch culture for example. Symbolism that primarily is seen in their rituals or satanic beliefs, are also found in this new and trendy culture. From music videos and films to advertising & marketing, there are plenty of examples of the masses ‘consenting’ to symbolism and such in plain sight.

On Sept 4th 2018, Denver International Airport (DIA) tweeted something that is either a genius marketing ploy or a ‘hidden in plain sight’ scenario: 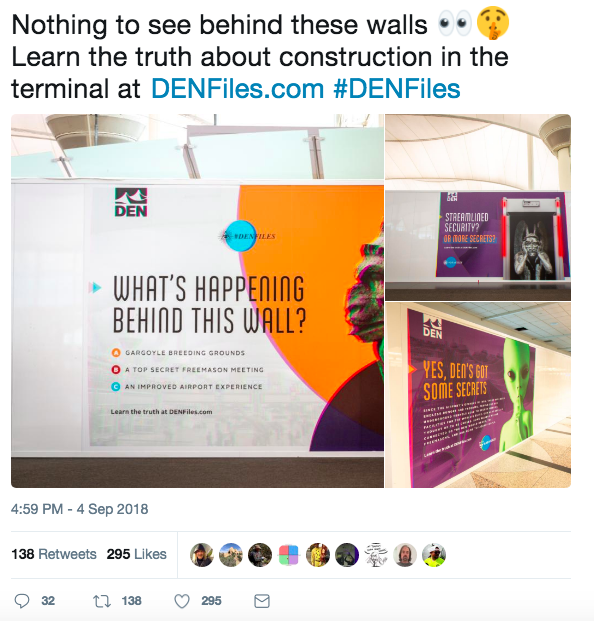 Nothing to see behind these walls Learn the truth about construction in the terminal at https://t.co/Du9Gb3AmW4 #DENFilespic.twitter.com/dd4lAdDUsp