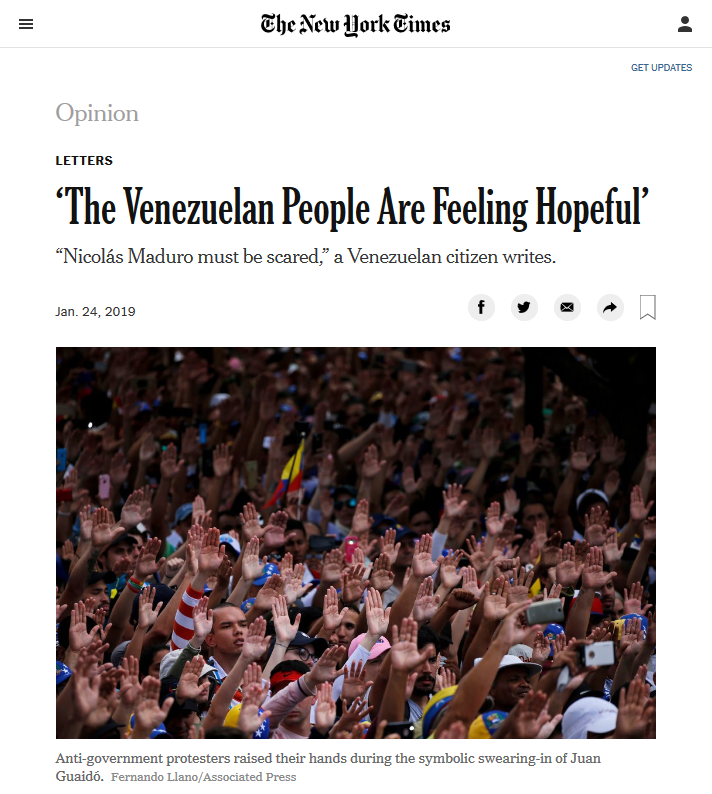 The latest bizarre episode in the Trump presidency is currently playing out in Venezuela. Just weeks after President Nicolás Maduro’s inauguration, Trump officially recognized Juan Guaidó, the 35-year-old head of the National Assembly—a man who has never even run for president—as the rightful head of state. A White House statement (1/29/19) announced, “President Trump stands with the people of Venezuela as they demand democracy, human rights and prosperity denied to them by Maduro,” noting that the “people” had “courageously spoken out,” and that the US would pursue increased sanctions on the country.

More alarmingly still, Trump has continually threatened a military intervention in Venezuela (New York Times, 8/12/17), and his National Security Advisor John Bolton allowed himself to be filmed with a notepad that read, “5,000 troops to Colombia” (CNN, 1/29/19).

Before any troops are sent anywhere, we should ask ourselves, who exactly does Trump mean by “the people of Venezuela”? A recent local poll shows that 86 percent of Venezuelans oppose military intervention, while 81 percent already disagree with the current US sanctions.

Nevertheless, it appears that the media have decided that “the people” want regime change, after all. PBS NewsHour (1/30/19) interviewed one Venezuelan resident of New York City who claimed he spoke for the entire population: “I—not only I—but 30 million people support the US circumstance,” meaning Washington’s attempt to replace the government. The New York Times (1/24/19) published a letter from someone in Boston using the phrase “the Venezuelan people” and “us” interchangeably, claiming Guaidó is “what we need” and that we are “feeling hopeful.”

On MSNBC (1/30/19), reporter Mariana Atencio declared matter-of-factly: “This is a battle right now between legitimacy and power. Guaidó has the legitimacy, but Maduro has the guns, meaning the power.” 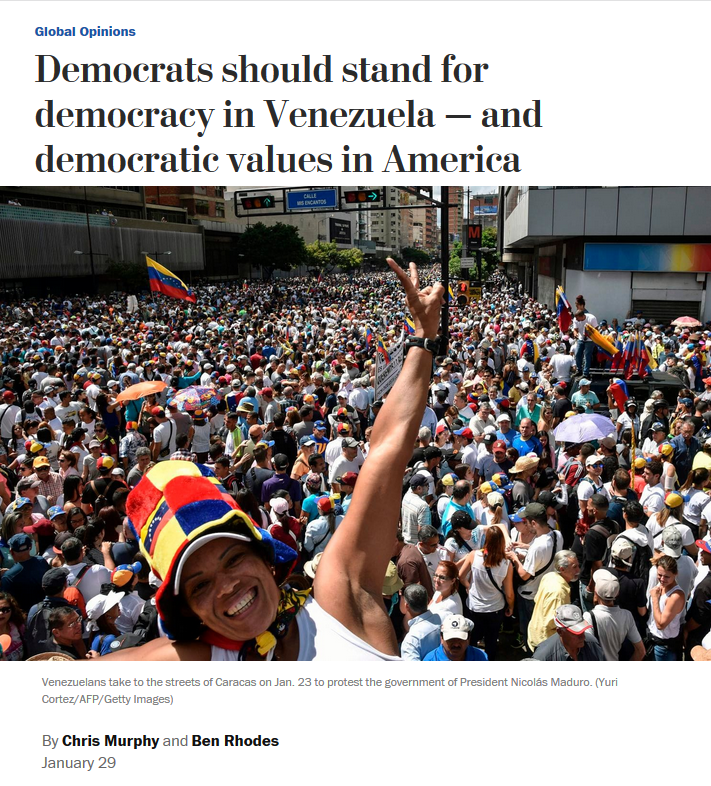 A Washington Post op-ed (1/29/19) declared that we should provide more support for “the Venezuelan people” who are demonstrating in the streets by working with the UN Human Rights Council to “tighten the sanctions” on Maduro, presenting a picture of the US leading a unified world against a dictatorship oppressing its people.

But in reality, the UN Human Rights Council has formally condemned the sanctions, noting they “disproportionately affect the poor and most vulnerable”; it called on all member states to break them, and even began discussing reparations the US should pay to Venezuela. A UN rapporteur who visited the country described Trump’s actions as possible “crimes against humanity” (London Independent, 1/27/19). This has not been reported by the New York Times, Washington Post, CNN or any other US national media outlet.

Ignoring all this relevant information, the Post (1/29/19) noted that the emergence of Guaidó has brought hope to the “Venezuelan people” (or “long-suffering Venezuelans”) for the “restoration of their democracy.” This is despite the fact that more than 80 percent of Venezuelans have never heard of Guaidó, and that the body he leads, the National Assembly, has an over 70 percent disapproval rating (roughly the same as the disapproval rating for Maduro).

There has been a great deal of coverage (CNBC, 1/23/19; New York Times, 1/23/19; Fox News, 1/23/19) of the “Venezuelan people” protesting for Guaidó, but very little of the counter-protests in support of the government that complicate the picture. This continues a longstanding media policy of treating “the Venezuelan people” as a term that exclusively means “anyone who agrees with US policy.”

In a study of over 500 articles over a 16-year period published this week (Race & Class, 1/25/19), I found that terms like the “Venezuelan people” or “civil society” were used exclusively to refer to opposition groups in alignment with (and funded by) the US government. US intentions and actions in the country were consistently presented as democratic, regardless of their nature.

The US supported the opposition’s 2002 coup attempt to remove Maduro’s elected predecessor, President Hugo Chávez. White House press secretary Ari Fleischer framed the events as “the Venezuelan people rising up to defend democracy” (Washington Post, 4/13/02) and Secretary of State Condoleezza Rice stated that “Chávez’s policies are not working for the Venezuelan people” (New York Times, 4/15/02).  Media followed the government’s lead, with the London Times publishing an opinion piece (4/13/02) lauding “the people of Venezuela” for “mobilizing” against the government, while the Miami Herald (4/15/02) quoted an observer declaring that Chávez’s restoration meant that “the Venezuelan people have been betrayed.”

When acknowledged to exist at all, government supporters were consistently dehumanized as “thugs” (Washington Post, 3/29/14) or “gangs” (London Times, 4/12/14). The New York Times referred to the working-class counter-protesters that saved democracy in 2002 as “armed thugs” (4/15/02), “Dobermans” (4/12/02) or “furious mobs of Chávez supporters marching violently through the capital looting stores in poor areas” (4/16/02). (The latter article described the coup supporters as engaging in “a week of peaceful marches.”)

During a 2014 US-supported opposition attempt to violently overthrow the government, the Washington Post editorial board (3/29/14) implied the country was calling for foreign intervention:

Venezuelans despair at the lack of international interest in the political crisis that is rocking their country. Since anti-government protests began early last month, at least 34 people have been killed, most of them opposition supporters gunned down by security forces or government-backed gangs.

Referring to the same event, the Miami Herald (2/26/14) published an op-ed headlined “The Fight Is Between Nicolás Maduro and the Venezuelan People.”

President Maduro is unpopular, with approval ratings consistently below 30 per cent. Yet 31 per cent of the entire electorate voted for him in 2018, a higher percentage than Trump or Obama received in 2016 and 2012, respectively. (No one realistically maintains that Henri Falcón—the leading opposition candidate, who was hampered by widespread boycotting—actually got more votes in the election than Maduro.)

Venezuela certainly does need radical change, but erasing the voices and even existence of the people, as the media has done, will only hinder public understanding of the issue and hamper reconciliation.