Janine Jackson interviewed Tina Vasquez about reporting on immigration for the October 19, 2018, episode of CounterSpin. This is a lightly edited transcript.

Janine Jackson: In a typical corporate media story on the family separations and deportations and asylum denials that define immigration policy under Donald Trump, the images and sometimes voices of immigrants are essentially illustrative. They add “color” and specificity, but they, their actions, don’t generally set the frame of the story. The objects of policy, immigrants still somehow are not the central subjects, the main drivers, of the story of their lives.

Centering immigrants and their agency changes the fabric of reporting and shifts the static understanding of the situation, opening ways forward beyond the logjam of hopelessness and frustration so many now feel. Tina Vasquez is the senior immigration reporter at Rewire.News. She joins us now by phone from North Carolina. Welcome back to CounterSpin, Tina Vasquez.

Tina Vasquez: Thank you for having me. 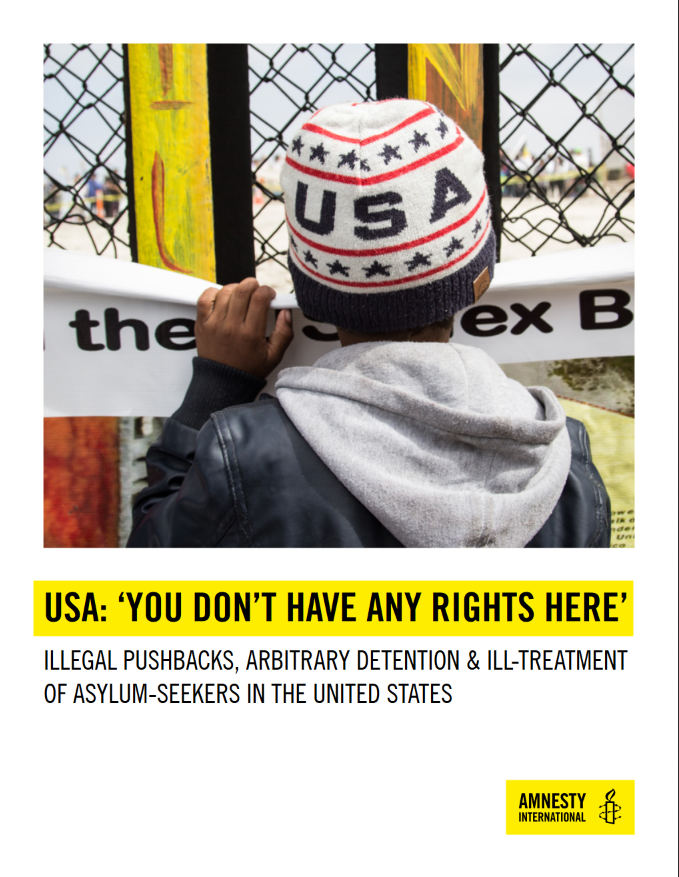 JJ: Amnesty International released a report just last week, USA: “You Do Not Have Any Rights Here,” documenting multiple sorts of abuses at the US/Mexico border involving punishing asylum seekers. I suppose I was somewhat surprised to see it ignored by so-called mainstream media. There was a piece on Newsweek online. Voice of America, actually, ran something. But for a report that pulled together a number of current concerns, including how Customs and Border Protection are defining “family,” I guess I hoped for more. But you reported on this for Rewire. What did you find important in that Amnesty report that people should know about?

TV: I guess what I found most shocking is the number of families that were actually separated, how Amnesty provided an update number that’s more than double what was originally reported. So Amnesty’s reporting that more than 6,000 families were separated at the border, and that the Trump administration’s family separation policy that was announced or confirmed by Jeff Sessions in, I believe it was, April 2018, actually started to get rolled out quietly in July 2017. And so they think it impacted 15,000 individual people, and more than 6,000 families.

And that still is just an estimate. Because when the policy was being rolled out more quietly, with less oversight and without any sort of eyes on it publicly, there’s really no telling how many families were subjected to the policy, how many families remain separated or how many children were disappeared into a system, and their parents as well, deported, to never be seen again. It was a really shocking report, and that was just one part of it.

You mentioned a lot of the abuses that they’re seeing. A great deal of attention is devoted to the treatment of transgender women, in particular, who are migrating to the US seeking asylum. Women in the report report being sexually abused and assaulted in detention, being detained alongside men, and really having no recourse, not receiving medical care for things that they need. It’s a wide swath of abuses that cover very, very vulnerable people.

JJ: One of the authors of the report indicated that in some of the situations, the behavior actually conforms to internationally recognized criteria for torture.

TV: Yeah. I also spoke to an immigration attorney who told me he’s representing some of the clients that were in the report, and that he certainly thinks of this as torture, and it falls along those lines and those definitions, because of the psychological damage that parents experience, not knowing where their children are for so long, not knowing if they will see them again. And, of course, there’s the damage the children experience; some are reporting that could be irreparable.

It’s been such a disturbing, harmful—I can’t use the word I want to use—it’s been a mess. And now the Trump administration is considering rolling it out again. So the public outcry, while really overwhelming at times, and it seemed to be the reason why the executive order was signed, it didn’t seem enough to stop the Trump administration from continuing this policy.

JJ: Part of what informative reporting like yours does is demonstrate continuity and disjuncture in immigration policies and practices. It’s not about Obama versus Trump, or Democrats versus Republicans. It’s, do we want a humane, welcoming society, and how do we go towards that, or do we want a racist and nativist one? You know, things can have happened before and still be worse now, and that seems very important to underscore and to make sense of.

TV: If nothing else, what I hope that my reporting does is it makes it clear—and I’m really unapologetic in my stance on this as a journalist—I think we’re told that we’re supposed to be unbiased, but I can show you facts and evidence to show you that the US immigration system is inherently abusive and violent and racist. And so what you’re seeing is the products of that; it’s just being wielded by a different administration that is more overtly anti-immigrant, and more comfortable being overtly racist.

But that is always my starting point when doing immigration reporting. It doesn’t matter who’s in the White House, that’s the starting point, that detention is inhumane and violent, and so is the immigration system. 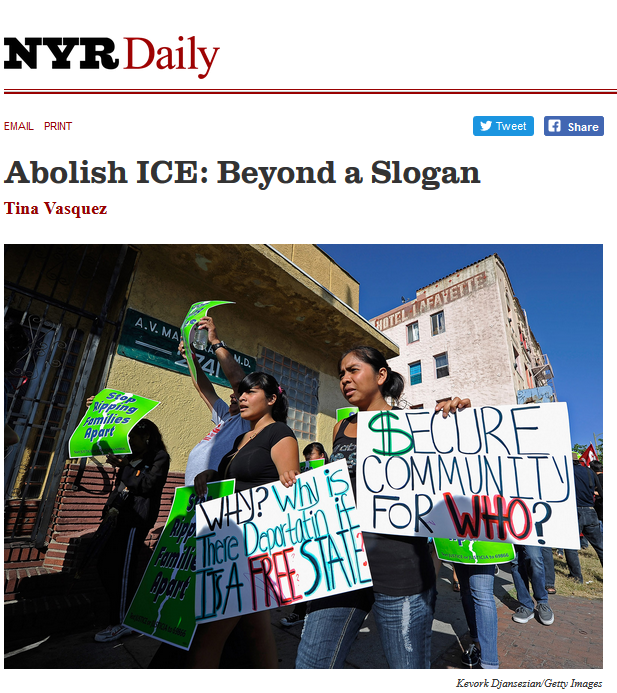 JJ: When I was talking about letting immigrants’ actions set the dynamic of the story, rather than, “the US government announced this policy; here’s some quotes from immigrants in response,” I was thinking about recent pieces of yours, one that ran on Rewire.News and NYR—the New York Review of Books—Daily, that was headlined “Abolish ICE: Beyond a Slogan.” I found it a very encouraging story.

And just to the point that you’ve just made, it’s reporting; it doesn’t change over into some other category of thing. It’s just reporting that has different actors at the center of it. And it really importantly shifts, I think, our understanding of the situation. I wonder if you could tell us a little bit about reporting that story on Abolish ICE, and what’s coming through there?

TV: It’s something that I’m thinking about more and more. There’s a queer undocumented poet named Yosimar Reyes, who’s been doing a speaking tour called #UndocuJoy. And he talks a lot about how we only want to show the tragedy that is what’s happening to immigrants, or how hard it is to be an immigrant, with no real examples of how immigrants every day don’t just survive and thrive, but have full and fulfilling lives. And so that can’t be at the center of all of the reporting I do as an immigration reporter. But it’s something that I’ve been thinking about, and it’s been weighing on me.

And so this Abolish ICE piece changed form in its reporting. Initially, it was going to be sort of an overview of how elected officials are signing on, or signing off of, the movement to Abolish ICE. That just didn’t feel right; it didn’t feel good, and it didn’t reflect the interviews that I was doing. It was important to me that the piece showed the resilience of immigrant communities, that the movement to Abolish ICE is led by immigrants, undocumented immigrants, and specifically brown and black, queer and trans immigrants. They are on the front lines, as they have been in many movements. And it was important to me to highlight that, and to showcase their resilience and the ways that they’re fighting back. And then also to sort of uplift the voices of people who don’t have a lot of options, but are still fighting back. 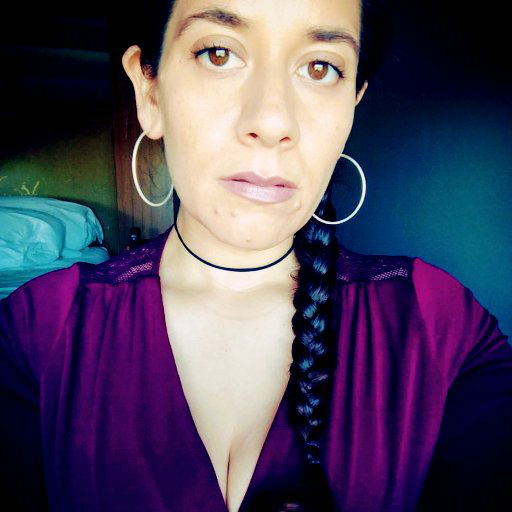 Tina Vasquez: “Different immigrant communities have different realities and lived experiences. And I want to highlight those as much as possible, and make them the story, make them the center of the story.”

That’s why we showcased José Chicas, who’s a pastor in North Carolina who’s been in sanctuary for over a year. Unless a private bill is introduced in his name, he can’t remain in the US, and he’s stuck in a church.

And people like Azul Uribe, who was deported under the Obama administration, facing a ten-year bar, and she’s coming up on nine years, and she’s terrified to come back to the United States, because it’s an even scarier place than when she was first deported.

So different immigrant communities have different realities and lived experiences. And I want to highlight those as much as possible, and make them the story, make them the center of the story.

JJ: And when you do that, things fall out on such different lines than throughout much of reporting. The people that you talk to don’t split their issue or their lives into, you know, the families versus felons, the whole “good versus bad” framework that the state pushes, and that media too often echo. They just, that’s not how they see things at all. They have a different view of it.

TV: Yeah, there are certainly no clear-cut lines. And the example of “felons, not families,” is really striking to me; that’s something that President Obama said. He said that we’re deporting felons, not families, or that’s who we’re targeting. But, you know, if you are deported in the United States, and you come back to try to reunite with your family, you are a felon; that’s a felony. So you are both a father, a mother, a family member, and now you are a felon in the eyes of the United States. The immigration system is messy and it’s complicated, and tidy narratives don’t serve anybody.

JJ: We’ve been speaking with Tina Vasquez, senior immigration reporter at Rewire.News. Thank you so much, Tina Vasquez, for joining us this week on CounterSpin.

TV: Thank you for having me.