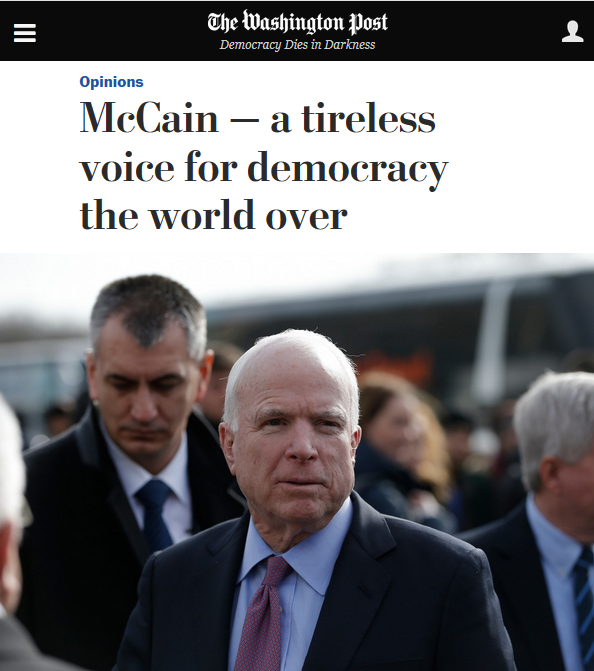 “McCain has never wavered in his support for democracy and human rights,” the Washington Post‘s Fred Hiatt declares (12/17/17)–which will be news to Palestinians, Nicaraguans, South Africans and many others.

Washington Post editorial page editor and human avatar for DC national security orthodoxy Fred Hiatt published Sunday (12/17/17) what would be an otherwise non-sequitur love letter to John McCain, the DC national security state’s loudest champion and favorite branding exercise—if it weren’t for the obvious subtext that McCain’s health is rapidly deteriorating. As such, Hiatt’s proto-obituary sets the standard for all other flattering, ahistorical profiles of the senator that will invariably come down the pipe.

US corporate media’s love affair with McCain has been well-documented by FAIR over the years (e.g., FAIR.org, 2/24/00; Extra!, 5–6/08; FAIR.org, 7/24/17). McCain has charmed the press to mold his brand as Moderate, Reasonable Man of Principle—despite decades of evidence to the contrary. Hiatt’s column illustrates the two most common tropes in McCain whitewashing:

1. Not only ignoring John McCain’s support for human rights–abusing countries—including the US—but spinning him as a “human rights champion.”

Year after year, to no particular political advantage, McCain has traveled to distant, lightly touristed corners of the world, dragging along whatever senators or members of Congress he could, no matter their party or ideological persuasion. Meanwhile, the McCain Institute for International Leadership gives temporary shelter in Washington and Arizona to democratic activists from those same distant corners.

But McCain has never wavered in his support for democracy and human rights, and in his conviction that the United States needs to provide moral support to those who fight for freedom around the world. 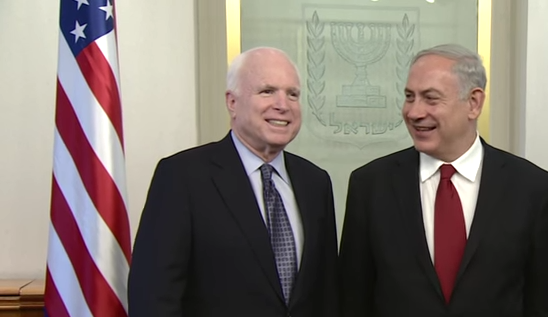 No bigger myth permeates corporate media’s love affair with McCain than the image of him as a “champion of human rights.” Those pushing this trope routinely ignore the fact that McCain has been among the biggest champions of, among others, human rights–abusing Israel and Saudi Arabia. McCain has repeatedly shielded Israel from criticism, even going to the mat to defend its bloody 2014 bombing of Gaza that left 1,500 civilians dead, including over 500 children, which McCain described as “admirable” in its “restraint.”

“Thank god for the Saudis,” McCain told CNN that same year, about a country that routinely executes scores of people annually, for “crimes” ranging from political protest to adultery to sorcery. McCain—along with his longtime pro-war friend Lindsey Graham—was crucial to blocking efforts to cut off arms sales to Saudi Arabia as it carried out a brutal bombing and blockade of Yemen, the poorest country in the Arab world—causing over 10,000 civilian deaths and upwards of a million cases of cholera.

To Hiatt, none of this merits mention. Nor does McCain’s aggressive lobbying for the Iraq War, which killed between 500,000–1 million Iraqi civilians—a war McCain pushed for so aggressively that he went on network television to push the lie that Saddam Hussein was behind the 2002 anthrax attacks. Likewise unmentioned were McCain threatening North Korea with “extinction” (FAIR.org, 9/12/17), or his jocular threat to “bomb-bomb Iran.” Of course Hiatt doesn’t remember McCain’s support for the murderous Nicaraguan Contras—the lawmaker was on the board of the US Council for World Freedom, a far-right group that was part of the illegal Iran/Contra network—or his votes against sanctions on apartheid South Africa.

McCain doesn’t, of course, care about “human rights”; he cares about using the language of human rights to sell US hegemony to credulous centrist and liberal pundits. He mysteriously cares about the plight of those in Russia or Libya or Iraq when their country’s leaders are targets of US hard or soft power, but is suddenly silent on the US and its allies’ wars of aggression, bombing campaigns and use of hunger as a weapon of war. Indeed, the “McCain Institute,” which Hiatt praises as giving “shelter in Washington and Arizona to democratic activists” around the globe, received a million-dollar donation from the mass-executing absolute Saudi monarchy last year.

2. Downplaying or omitting that “maverick” McCain is, the vast majority of the time, a boilerplate right-wing Republican.

But he does not disguise how worried he is by the deeper currents that recall to him the darker movements of the 1930s: the nativism, the assaults on freedom of the press and the rule of law, the blaming of foreign competition for all ills, the rise of extremism.

“I worry about the polarization that’s going on here, I really do,” McCain said. “The terms of the debate is what is really disappointing.”

McCain loves to handwring about “polarization” and partisanship, but the reality is—with a few high-profile exceptions—McCain is a by-the-numbers Republican. He supported Bush’s tax cuts (after initially balking at them), votes to reduces regulation, backed all major wars and sanctions, voted for all but one of Trump’s cabinet nominees (and only because he deemed OMB nominee Mick Mulvaney inadequately pro-war) and—though he’ll miss the vote due to health reasons–supports the Republicans latest far-right tax bill. 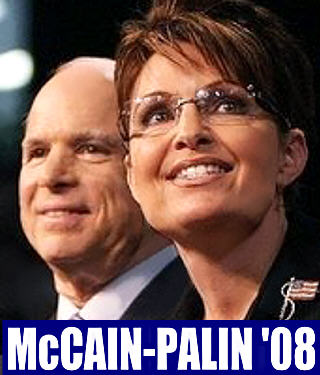 By selecting Sarah Palin as his running mate, John McCain helped create a world where Donald Trump could be president.

On the subject of lowered standards of political decorum, it’s worth noting that McCain almost single-handedly gave us the national political career of Sarah Palin, who more than any other candidate paved the way for Trump. When it suited his end, McCain has pandered to and propped up the most reactionary elements in his own party—notably in 2010, when he insisted the federal government “build the dang fence” while demagoguing the issue of immigration at the height of Tea Party fervor.

Hiatt does have a throwaway line about being “sometimes disappointed by McCain’s stances on domestic matters”—i.e., issues that don’t involve killing foreigners—but specifies only the current tax legislation. His image of a maverick rebel whose actions have “no particular political advantage” is cemented. A friend of NatSec orthodoxy is passing, and NatSec orthodoxy’s premier propagandist must uphold his role as a flawed (but ultimately noble) arbiter of “human rights,” “democracy” and “freedom”—not unlike the US itself.