In a recent White House meeting on “sanctuary cities,” President Trump called some undocumented immigrants “animals” — a disturbing new low even for someone who’s demonized immigrant communities from the beginning. The president painted a picture of “sadistic criminals” who are being given “safe harbor” through so-called sanctuary policies.

While Trump and his right-wing supporters would have people believe that “sanctuary cities” are places that allow lawlessness and where immigrants aren’t prosecuted for crimes, the reality is far different.

Here are the facts: the federal government can enforce immigration law anywhere. The term “sanctuary city” typically refers to a jurisdiction that wants to limit the use of local law enforcement resources to carry out federal law enforcement work, especially when they’re asked to violate constitutional protections.

While these cities focus their resources on fighting local crime, they can still work with the federal government on immigration enforcement, since federal agents can issue a warrant. This is especially the case in situations where an undocumented person has carried out a serious crime — as opposed to someone who, for example, happens to have a broken taillight. 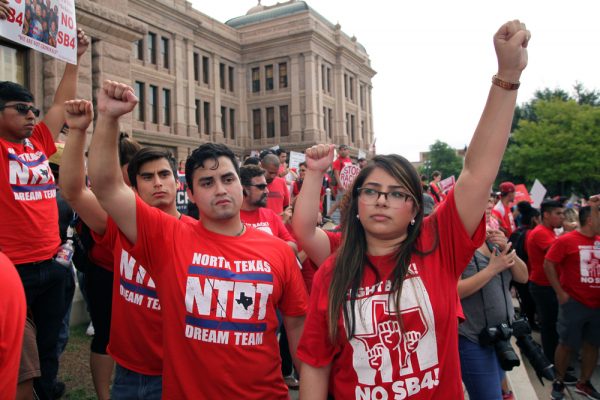 As two police chiefs from Storm Lake and Marshalltown, Iowa recently explained: “We depend on residents, including immigrants, to come to us when they see something suspicious or potentially criminal. If they hear of a looming ‘crackdown’ that could affect their families and friends, they are less likely to come to us to report and prevent actual crimes.”

A law enforcement association representing some of the largest cities in the country has similarly argued that asking local police to do the work of federal immigration officers would likely lead not only to more crime against immigrants, but also to more crime overall.

And a 2017 analysis from the University of California at San Diego found that “counties designated as ‘sanctuary’ areas by ICE typically experience significantly lower rates of all types of crime“ than comparable counties without such policies in place.

While ongoing police abuse against communities of color has underscored the urgent need for police reform and the rebuilding of deeply damaged community-police trust, further eroding trust by attempting to dismantle “safe cities” policies would be a significant step in the wrong direction.

Despite the facts, Trump and his administration want to scapegoat immigrants, appealing to fear and racism rather than actually looking at which policies are most effective.

Time and again, Trump entangles two separate issues — immigration and crime — by telling gruesome stories about crimes committed by immigrants that exploit the pain of victims’ families and aim to demonize entire communities. (When it comes to crime against immigrants however, the administration is mysteriously silent.)

Especially as Trump’s administration is reaching new levels of cruelty by separating children and parents at our borders, we have to be vigilant in countering the use of any dehumanizing lies for political gain. We have to push our elected officials to stand up to Trump’s dangerous anti-immigrant agenda.

Our public policies should be grounded in our shared values and in sound data about what works and what doesn’t work in our communities — never in fear-mongering.

The post The Truth About ‘Sanctuary Cities’ appeared first on OtherWords.