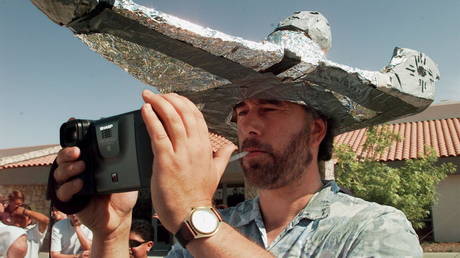 The earth is flat; FEMA is controlled by shape-shifting reptilians; water additives are turning the freaking frogs gay… Conspiracy theories used to be the preserve of hippies and kooks, but now the Democratic party wants in.

Although Special Counsel Robert Mueller’s report has put to pasture the idea that President Donald Trump conspired with Russia to steal the 2016 election, there’s something about the ‘Russiagate’ conspiracy that just won’t die. For the Democratic Party and its cheerleaders and supporters in the media, the Russians are still the sinister force behind everything bad and rotten in American politics.

We’ve gathered and ranked five of the best here. Strap on your tinfoil hat and enter the twilight zone of the American establishment.

Attorney General William Barr sent waves through Washington on Wednesday when he told a Senate Committee that FBI “spying did occur” on the Trump campaign in 2016, and announced an investigation into whether this surveillance was justified.

However, it has been confirmed that the FBI spied on the Trump campaign, or “conducted surveillance,” if you will. A warrant to wiretap Trump campaign adviser Carter Page was obtained by the FBI, with a shady dossier of anti-Trump opposition research used as justification. The dossier, compiled on behalf of the Democratic Party, was known to be unverifiable by the FBI, but presented as evidence anyway.

A note to Schumer: If you’re going to accuse your opponents of conspiracy, check your party isn’t sitting on top of a massive conspiracy of its own first.

Comrade Bernie is a Russian plant

He’s the most popular Senator in the US, and a frontrunner for the Democratic nomination for the presidency next year, but according to one former New York Times columnist and current LA Times writer Virginia Heffernan, Bernie Sanders is an agent of Vladimir Putin.

Heffernan points out that Sanders’ 2016 campaign was promoted on social media by “Kremlin minions,” and that his former strategist once worked with now-jailed Trump campaign manager Paul Manafort lobbying for Ukraine’s pro-Russian ex-president Viktor Yanukovich.

Intriguing, but the story falls apart when you consider Heffernan’s definition of “Kremlin minions” is based on a database compiled by a pro-NATO think tank with zero methodology, and that Democratic lobbyist Tony Podesta, Clinton strategist Mark Penn, and John McCain’s 2008 campaign manager Steve Schmidt also lobbied for Yanukovich in the late 2000s.

Of course, Sanders is an easy target. He’s been an eccentric dissident his entire political life, stuck up for leftist movements worldwide, and even ‘honeymooned’ in the Soviet Union. But the ‘Russian Stooge’ accusation has also been leveled by Democrats and their media cheerleaders at anyone in their party who drifts too far from Clinton-style centrism, from anti-war 2020 candidate Tulsi Gabbard to socialist firebrand Rep. Alexandria Ocasio-Cortez. Although to be fair, the accusations against Ocasio-Cortez came from an actual comedian, not a journalist impersonating one.

It doesn’t take much probing to reveal that the research behind the report came from a firm called ‘New Knowledge,’ since discredited for manufacturing a fictitious troll army of its own to swing Alabama’s 2017 Senate race for Democrat Doug Jones (that really happened). No proof exists as to whether the Russian operatives mentioned were actually Russian operatives at all, whether they actually sold sex toys, or whether the ads were in service of some nefarious plot. Is any of this even real anymore?

Despite years of gaffes and hours of CSPAN footage showing former vice president Joe Biden inappropriately groping and touching women and children at Washington events, this scandal only broke recently because of Russia.

This particular conspiracy came not from a Democrat politician or media hack, but from Hollywood writer Randi Mayem Singer. Nevertheless, it’s representative of the current state of Russia-related discourse in the US.

Singer claims that the spread of the story “feels very Russian-inspired,” and supporters chimed in to suggest that the multiple women accusing the handsy former VP of invading their personal space were doing so to “sow discord” among Democrats. No evidence is provided, of course, but who would let facts get in the way of a good conspiracy theory.

Tinfoil hat rating: 2/10, at least make up some facts to support your theory

At last, we come to the granddaddy of the Russiagate conspiracies, in which New York Magazine’s Jonathan Chait asserts that Donald Trump has been an active agent of Moscow since 1987, when Russia was still the USSR and gas was 90 cents a gallon.

Over 80 paragraphs, Chait outlines some now-debunked allegations of collusion between Trump and Russia in 2016, before descending further and further into mental illness. He claims that Trump was somehow corrupted by the KGB during a 1987 visit to Moscow, where he mulled building property in the soon-to-be-open Soviet Union.


Trump abandoned his property plans, returned home to his gold-encrusted penthouse, and switched political affiliation to the Republican party, before taking out newspaper ads criticizing the US’ foreign policy at the time. Chait reckons Trump was bugged by the Russians doing something super-duper-incriminating, and cites the ridiculous allegations in the ‘Steele Dossier’ (See ‘Spying is lying’) as proof, along with the fact that Trump “acts like someone with something to hide.”

Every spurious tie between Trump and Russia is bundled together into one convenient, incoherent narrative: Trump hired Putin to hack voting machines; Russian trolls got their instructions direct from Trump Tower; Russia funds the NRA. Chait – now presumably rocking back and forth while gibbering about “active measures”  – even included a handy, totally-not-crazy infographic to help readers keep track of all the collusion.

Did you know that Russian MMA fighter Fedor Emelianenko is somehow involved in all of this?

With Prump/Tutin the high-watermark of Russiagate derangement, it’s nice to know that Chain has left that moment in time behind him, and now gets embarrassed when it’s mentioned at dinner parties.

Except he hasn’t. Days after the Mueller report found “no collusion,” Chait emerged from his basement to revisit his piece, arguing that it still holds up “extremely well,” and insisting that Putin holds “secret leverage” over Trump. Chait stated that his report was “ahead of the interpretive curve,” and proves the “hidden, corrupt relationship between Trump and Russia” to be “true,” at least in his own mind.