Despite having formerly labeled Jeff Sessions as a racist and white supremacist, members of the #Resistance are now ready to welcome him with open arms if it helps them remove Trump.

In a truly bizarre turn of events, Thursday evening saw scores of anti-Trump activists taking to the streets in cities across America to protest the firing of Alabama Republican Jess Sessions from the post of Attorney General, after president Donald Trump compelled his resignation on Wednesday. 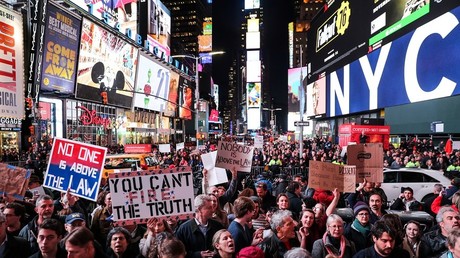 The demonstrations were mobilized over widespread fear that in replacing Sessions, Trump was ultimately trying to put an end to the “Russia collusion” investigation led by FBI Special Counsel Robert Mueller. Despite the unlikeliness of the alliance, thousands of people gathered in New York, DC, Boston and Chicago, to name just a few of the 900 cities that participated.

The protestors brought signs which read “nobody is above the law”, “you can’t fire the truth” and “hands off Mueller”. Many of the individuals and organizations (CommonDreams, MoveOn.org) involved in the demonstrations had done the same not long ago to oppose Trump’s controversial migration policies, much like they had done in order to oppose Trump’s nomination of Brett Kavanaugh to the Supreme Court. While the slogans on the signs have changed by the week, the end-goal of Trump’s ouster has remained consistent.

The Democrats naturally responded strongly to Sessions’ forced resignation which they see as motivated by his recusal in Robert Mueller’s ongoing Russia probe. Sessions potential danger for Trump was good enough to bring him into the #Resistance, despite that Sessions himself had been the target of their protests not long ago.

jeff sessions…welcome to the resistance

The Washington Post went further than simply defending Sessions in light of the ongoing investigation, publishing a “salute” to his career which praises his “grace and dignity”. MSNBC’s Rachel Maddow actively promoted the reinstatement protests on her Twitter account, while Illinois Senator Dick Durbin even spoke at the “Protect Mueller” rally in Chicago.

While the opportunistic partisanship is repugnant enough on its own, it is more troubling to wonder where the alleged rage over Sessions’ push for policies like mandatory detention for asylum seekers has gone. This is, after all, the same man who jokingly described these very same protesters as the “lunatic fringe” for opposing his family separation policy, leaving many absolutely incensed, including Chelsea Clinton:

You want to know what indecency and incivility sound like? People laughing and applauding at the “joke” about forcibly separating parents from their children. https://t.co/4A81UKymPY

In retrospect, the media hysteria and fierce demonstrations allegedly organized by Americans truly concerned with the plight of South American migrants seems to not have been as much about the migrants themselves as it was about blanket opposition to Trump. Sessions, like the migrants before him, simply serves as the means to that end, the details have become irrelevant. The speed with which Sessions has been absolved of his alleged sins doesn’t seem in the least bit concerning to many of those taking to the streets to defend him, despite that it was Sessions who developed and pushed policies that many of Trump’s opponents felt warranted comparison to the holocaust.

The blatant hypocrisy has not gone unnoticed, as critics took to Twitter to highlight the fickleness of the #Resistance’s resistance:

the resistance protested jeff sessions getting hired by trump and now they’re protesting him getting fired by trump.

It will be interesting to see all of the folks on the Left and in the media who falsely criticized Jeff Sessions over Russia and maligned him as a racist now defend him.