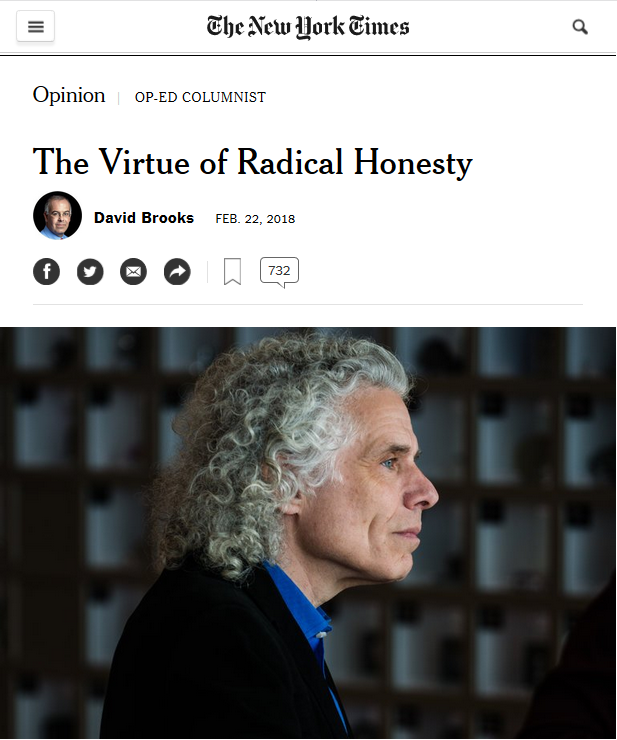 “The key to progress is information — making ourselves better informed,” David Brooks writes in a column (2/22/18) that systematically disinforms its readers.

We would usually expect that a 12-year-old kid would be taller than a 6-year-old kid. However, if a 12-year-old had only grown one inch over their last six years, we would probably be somewhat worried.

David Brooks devotes his most recent New York Times column, “The Virtue of Radical Honesty” (2/22/18), to presenting data from Steven Pinker’s new book, Enlightenment Now, which purports to show that things are better than ever. Most of the data has the character of boasting over our 12-year-old’s one inch of growth over the last six years.

For example, we’re all aware of the gloomy statistics around wage stagnation and income inequality, but Pinker contends that we should not be nostalgic for the economy of the 1950s, when jobs were plentiful and unions strong. A third of American children lived in poverty. Sixty percent of seniors had incomes below $1,000 a year. Only half the population had any savings in the bank at all.

The problem with the Brooks/Pinker story is that we expect the economy/people to get richer through time. After all, technology and education improve. In the ’50s, we didn’t have the Internet, cell phones and all sorts of other goodies. In fact, at the start of the ’50s, we didn’t even have the polio vaccine.

In the ’50s, wages and incomes for ordinary families were rising at a rate of close to 2 percent annually. In the last 45 years, they have barely risen at all. 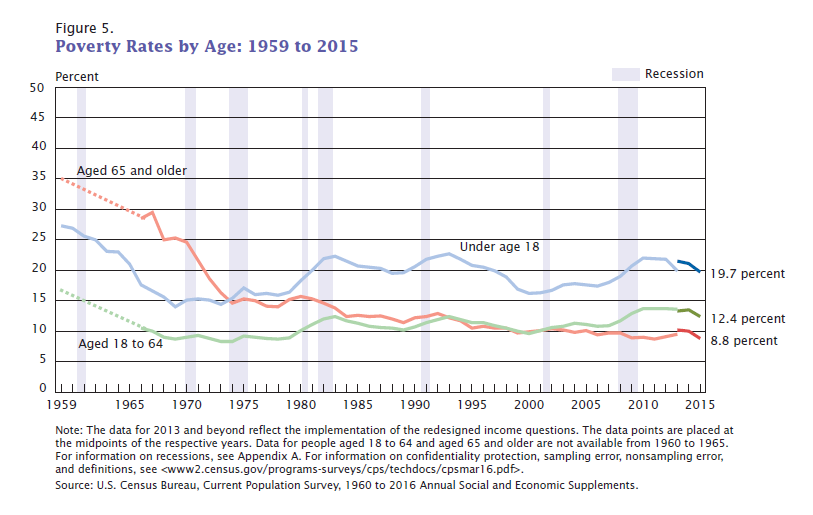 It’s hard to see the steady march of progress when you look at the US poverty rate over time. (chart: Wikipedia)

This fact can be seen even looking at the numbers that Brooks is bragging over. While it’s not clear where they got their poverty data, the child poverty rate comes closest to the numbers in the article. This was at 22.3 percent in 1983, it was down to 21.1 percent in 2014 and fell further to 18.0 percent in 2016.

Should we celebrate this reduction in poverty rates over the last 33 years? Well, the poverty rate had fallen from 27.3 percent in 1959 (the first year for this data series) to 14.0 percent in 1969. That’s a drop of 13.3 percentage points in just ten years. The net direction in the last 47 years has been upward.

There are a whole a range of other measures which leave real enlightenment types appalled by the state of the country today. While Brooks/Pinker tell us “only half the population had any savings at all” in the 1950s, a recent survey found that 63 percent of the country could not afford an unexpected bill of $500. The homeownership rate is roughly the same as it was 60 years ago. Life expectancy for those in the bottom 40 percent of the income distribution has barely budged in the last 40 years.

In short, a serious analysis of data shows that most people have good grounds for complaints about their situation today, since they have not shared to any significant extent in the economic growth of the last four decades. But apparently there is a big market for the sort of dog-and-pony show that Brooks and Pinker present, trying to argue the opposite.

A version of this post originally appeared on CEPR’s blog Beat the Press (2/23/18).