A Review of 9/11Unmasked: An International Review Panel Investigation by David Ray Griffin and Elizabeth Woodworth

If you want to fathom today’s world, absolutely nothing is more important than to understand the truth about the attacks of September 11, 2001. This is the definitive book on the subject.

For seventeen years we have been subjected to an onslaught of U.S. government and corporate media propaganda about 9/11 that has been used to support the “war on terror” that has resulted in millions of deaths around the world.  It has been used as a pretext to attack nations throughout the Middle East, South Asia, and Africa.  It has led to a great increase in Islamophobia since Muslims were accused of being responsible for the attacks.  It has led to a crackdown on civil liberties in the United States, the exponential growth of a vast and costly national security apparatus, the spreading of fear and anxiety on a great scale, and a state of permanent war that is pushing the world toward a nuclear confrontation.  And much, much more. 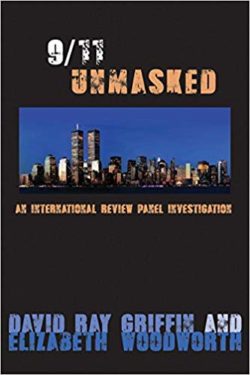 The authors of this essential book, David Ray Griffin and Elizabeth Woodworth, and all their colleagues who have contributed to this volume, have long been at the front lines trying to wake people up to the real news about 9/11.  They have battled against three U.S. presidents, a vast propaganda machine “strangely” allied with well-known leftists, and a corporate mass media intent on serving deep-state interests, all of…