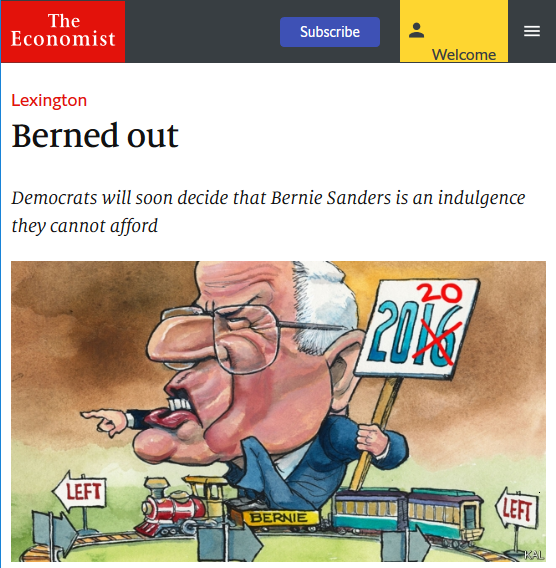 The Economist (6/7/18) writes off Bernie Sanders’ ideas as having “little support” among Democrats.

Earlier this month, the US politics opinion column of the Economist (6/7/18), pseudonymously written by “Lexington,” was accompanied by a cartoon depicting Sen. Bernie Sanders (Ind.–Vermont) with a comically oversized hook nose. Perhaps cartoonist KAL was unaware of the connotations of the hook nose in antisemitic caricatures of Jews over the years, though this seems unlikely.

The nasally enhanced Sanders was shown riding a train, directing it leftwards on its track. The track, however, is circular, suggesting that Sanders’ brand of left politics will go nowhere. The article itself is just as heavy-handed as the cartoon.

Lexington maintains that while Sanders is indeed the most popular politician in America, his time in the sun has passed, and that the popularity of his brand of progressive populism is vastly overstated. In Lexington’s words, Sanders

was considered competitive chiefly as a result of bored journalists’ efforts to inject drama into the yawnathon of Mrs. Clinton’s slow-walk to the nomination.

The first evidence for Sanders’ lack of support today is that he lost the 2016 Democratic primary to Hillary Clinton. Yet Sanders, winning 44 percent of the vote (comparable to Ronald Reagan’s 46 percent in 1976), did remarkably well, considering his disadvantages. Clinton had what was essentially a home-field advantage in the primaries, with Democratic Party machinery staffed at the time by Clinton loyalists like Debbie Wasserman-Schultz.

Journalists in the corporate press hardly wanted drama: Voters were subjected to a barrage of anti-Bernie media that portrayed Clinton as the only pragmatic choice against Trump, and argued that Sanders’ combative candidacy would only turn voters off from Clinton in the general election. Sanders ended up winning almost three times as many votes from young people as Clinton (Washington Post, 6/20/18), and raked in record numbers of small campaign contributions. But for the Economist, Sanders’ primary loss signifies that his brand, unsuccessful then, must therefore be unpopular now.

But the 2016 primary was two years ago. Since then, Clinton lost an unloseable election to Trump, and his administration’s two years of unbridled corruption have been met with reluctance by congressional Democrats to play hardball, in contrast to the Republican Party’s consistent stance throughout the Obama administration. On some issues, like banking and surveillance, centrist “establishment” Democrats have even voted alongside Trump and congressional Republicans. This weak opposition by the Democratic establishment, along with rationalizations of Clinton’s general election loss and the massive Democratic electoral losses of the past eight years, have caused Democratic voters to shift leftward under the Trump era.

Yet the Economist thinks that this leftward shift is but a passing fancy that peaked in 2016, because outside of universal healthcare, “none of Mr Sanders’s other big ideas—including free college and massive public works—is getting much play.”

Of course, leftist policy proposals like Medicare for All, free college or jobs guarantees are consistently attacked by corporate media, the Democratic establishment and Beltway donors as politically unrealistic or too expensive, favoring more “serious” Democratic proposals that don’t upset powerful financial or corporate interests. The Economist is one of the biggest culprits of this approach, and has in the past referred to Sanders’ policies as “utopian schemes,” “divisive” and “not merely unaffordable, but bad.” It has written off Sanders’ jobs guarantee proposal as “flawed,” and continues to decry his healthcare plan with the same old gripe—how are we going to pay for it?—a question that isn’t raised when Republicans pass out trillions of dollars in tax cuts for the wealthy and fight endless wars abroad.

The Economist cites its own declarations that Sanders’ policies are unpopular among Democrats as a way to frame him as the candidate that Trump would love to face in 2020:

If Democrats picked Mr. Sanders, it would not be for his ideas, which have little support within their party, let alone America. It would also be delightful to Mr. Trump, who fancies his chances of destroying “crazy Bernie.” If only for that reason, it is good that Mr. Sanders’ moment in American politics has probably passed.

But the Economist ignores polling that shows Sanders’ policies are actually extremely popular among Democratic voters, and quite popular with “let alone America”: Medicare-for-All maintains support from 79 percent of Hillary Clinton voters and 63 percent of all registered voters; tuition-free public college has the support of 80 percent of Clinton voters and 63 percent of voters in general. Public works spending is just generally popular, with 87 percent telling Quinnipiac (2/2–5/18) that they support “increasing federal spending for roads, bridges, mass transit and other infrastructure.”

The Economist article underscores an important current in today’s political climate: the reluctance of corporate media to seriously discuss left-leaning policies that provide alternatives to the racist and corrupt policies of the Trump administration, on the one hand, and the pro-corporate, half-compromise policies that the Democratic Party pushed over the past generation, which contributed to Trump’s victory in 2016.

The Economist article quotes an anonymous Democratic strategist as saying that Sanders’ political action group, Our Revolution, “doesn’t do anything” for its candidates, seemingly confirming the magazine’s claim that Sanders’ time has passed. Anonymous sources, of course, are both unreliable and often used as a tool to bolster false narratives. The reality is that candidates backed by Sanders have been winning just about half the time, with a number of such hopefuls winning elections against overwhelming odds, including Philadelphia District Attorney Larry Krasner and Virginia House of Delegates member Lee Carter. 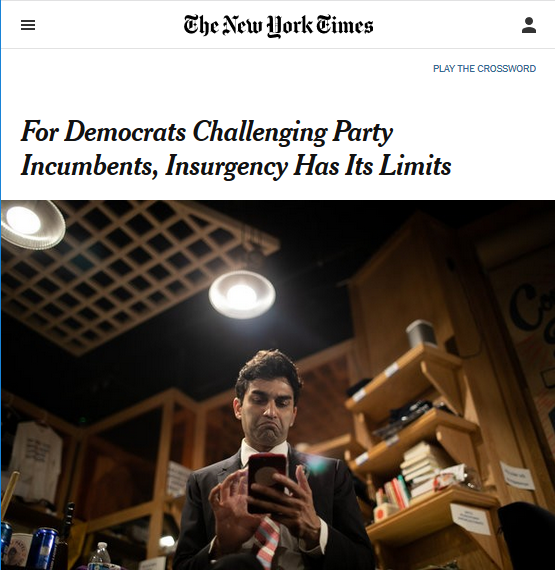 The one New York Times news article (6/21/18) that discussed Alexandria Ocasio-Cortez’s campaign before her victory was framed around the idea that “insurgency has its limits.”

What the Economist and the rest of corporate media miss is that the Democratic Party establishment continues to engage in ongoing suppression of progressive candidates. Democratic House whip Steny Hoyer was caught on tape trying to strong-arm a progressive candidate out of running (Intercept, 4/26/18), while Joe Crowley was accused by Ocasio-Cortez of Election Day dirty tricks. Major Democratic interest groups, such as the pro-choice EMILY’s List, declined to endorse female candidates like Ocasio-Cortez in favor of Crowley, while national Democratic politicians like Kirsten Gillibrand endorsed incumbent New York Gov. Andrew Cuomo over his progressive female challenger Cynthia Nixon.

The media also do their part in either suppressing or ignoring coverage of progressive upstarts. Before Ocasio-Cortez’s election, the New York Times only ran one news news article (6/21/18) on her candidacy, a roundup of primary challengers rather than a piece focused on her campaign. Ocasio-Cortez’s lack of corporate media presence in the race was exemplified by a tweet by MSNBC pundit Joy Reid: “Pretty much all of political journalism are doing an Ocasio-Cortez crash course tonight, myself included.”

Given that both the 2018 midterm elections and the 2020 presidential election have not yet been held, only time will tell how effective Sanders-endorsed politicians and the Democratic Party as a whole will perform on a large scale. But recent progressive victories show that Sanders’ candidates cannot be counted out, nor have their ideas ignored.

Messages to the Economist can be sent to letters@economist.com (or via Twitter @TheEconomist). Please remember that respectful communication is the most effective.