QUESTION: Mr. Armstrong: I have watched in amazement how you connect all these elements. Everyone I spoke to agreed this was your best WEC ever. You have said the Fed needed to raise rates because of the pension crisis and it would have nothing to do with inflation but it has to normalize rates to help pensions. Then we have the ECB refusing to raise rates. Would you please comment on the Fed’s actions yesterday? Is this a central bank war?

ANSWER: I understand this can get confusing because there are so many people who talk without any real-world experience. The Fed MUST raise rates to help the crisis in Pension funds. It raised the Fed Funds Rate (what banks charge each other) 25 basis points to 2.25-2.5%. While the Fed indicated there would be two more rate hikes in 2019, what has gone over everyone’s head is exactly what I have been warning about. We are witnessing indeed not a Currency War but a Central Bank War. Those people claim there is a Currency War because they focus only on trade. I do not see any actual counter-trend manipulation attempts as was the case with the G5 back in 1987 to manipulate any currency for trade purposes. 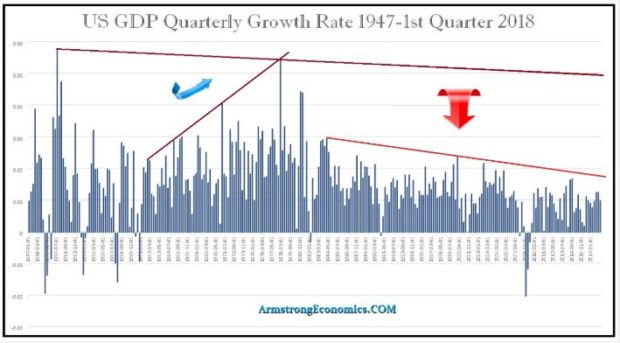 This is a brand new Central Bank War that nobody seems to get I suppose since I may be the only person who actually speaks to central banks outside the USA. All the various central banks and the IMF have been lobbying the Federal Reserve since 2014 pleading with it NOT to raise rates. I have stated many times that the rate hikes by the Fed have NOTHING to do with economic growth, inflation, or trying to stop a speculative bubble in stocks. We can see that GDP growth since the high back in 1978. That may come in the future when the stock market rallies, but not now.