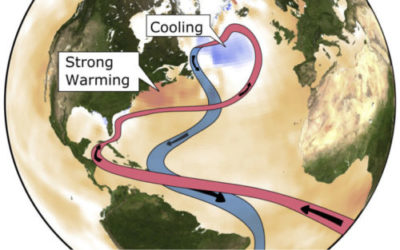 The Atlantic Overturning Current is part of a worldwide twisted loop of ocean water, called the thermohaline cycle (thermo = heat, haline = salt), which emerges very salty and warm out of the Gulf of Mexico, travels north as a surface current along the east coast of North America, veers east in the North Atlantic toward Europe, then loops back west to a region just south of Greenland where it cools and sinks to the ocean floor – because it has become denser than the surrounding and less salty North Atlantic waters (colder water is denser than warmer water, and saltier water is denser than fresher water of equal temperature). The dense highly salted descending water then runs as a cold deep ocean current south along the east coast of South America, and continues in a complicated path along the ocean floor into the Pacific Ocean, where it warms and eventually rises to become a surface current of more buoyant less salty water. This current distributes solar heat collected by ocean waters in tropical latitudes to higher latitudes (closer to the poles). 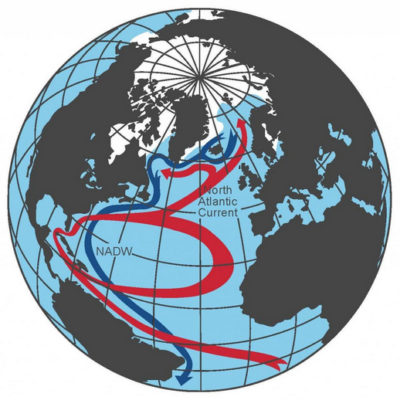 In 2004, Peter Schwartz and Douglas Randall described the thermohaline cycle this way:

In this thousand-year cycle, water from the surface in tropical areas becomes more saline through evaporation. When it circulates to the poles and becomes cold (“thermo”), the greater density still present from higher salt (“haline”) concentration causes the water to sink to great…