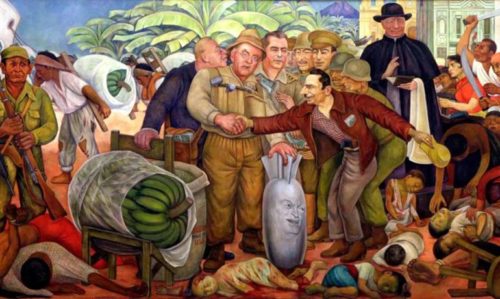 Diego Rivera’s painting at the beginning of this article is called “Gloriosa victoria” (“Glorious Victory”) and was done by him in 1954 as a protest against the U.S. overthrow of Guatemala’s democratically elected government that same year. At the painting’s center, U.S. Sec. of State John Foster Dulles shakes hands with the new (Washington-approved) president of Guatemala while behind them other U.S. officials hand out money to Guatemalan soldiers.

This past Memorial Day, one vet who wasn’t honored by anyone but me was my Uncle Adam on my dad’s side. He died only a few years ago, my last older relative. A civilian for god knows how many decades, he was still a corporal at heart. And he had the mouth to prove it. If there was a version of Scrabble for only four-letter words, he would’ve never lost a game.

But the important thing is this. If you’re a vet like he was, when you die the government suddenly appears out of nowhere to describe your death as the passing-on of an American hero, all past crimes absolved. The VA may have scorned your claim that your cancer resulted from your tour of duty at Area 9 of the Nevada Atomic Test Site, or it may have turned a blind eye to the symptoms you suffered after your exposure to napalm in Vietnam, or it may have been aggravated by your claim that you returned from Afghanistan with PTSD, but once you’re dead everything’s forgotten and the White House bellows —

This man’s a hero!