In the standoff between the Democratic House and President Donald Trump over the latter’s demand for border wall funding, the corporate press has done a passable job highlighting the unpopularity of Trump’s border policy, as well as exploring the vast real-world impact of the shutdown. There have been notable low points in the coverage as well, from tabloid-style outrage-baiting  (FAIR.org, 1/7/19) to overwrought falsely balanced factchecking (FAIR.org, 1/10/19).

But there’s also been a major blindspot in reporting on the shutdown, and it involves the very thing at the center of the entire debate: Trump’s proposed border wall expansion. 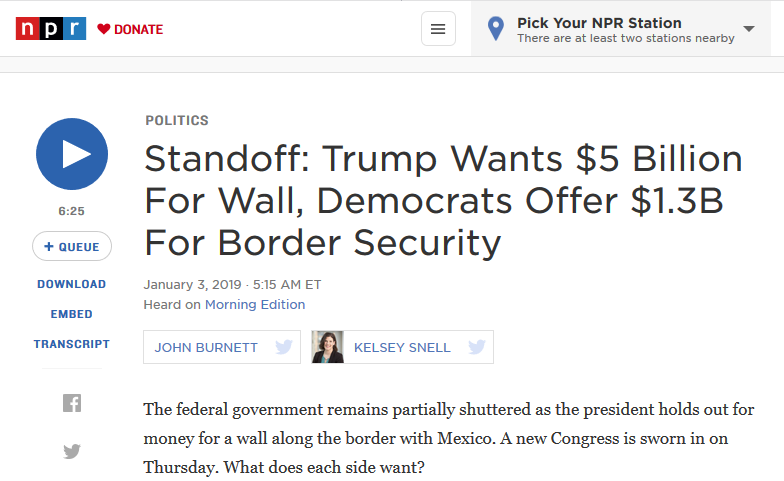 Media scrutiny of Trump’s border wall request typically doesn’t go much beyond the number in the headline (NPR, 1/3/19).

This NPR headline (1/3/19) is a fairly representative example of what you might see during the shutdown : “Standoff: Trump Wants $5 Billion for Wall, Democrats Offer $1.3B For Border Security.” The story, too, is pretty standard fare. It explains that the House Democrats have effectively re-passed the border security measures that won unanimous approval in the Republican-majority Senate five weeks ago (which included $1.6 billion for “border security” measures, but no appropriations for a wall expansion), and that the only thing blocking the reopening of the government at this point is Senate Majority Leader Mitch McConnell, who now refuses to allow a vote on any legislation  that doesn’t include the $5.7 billion that Trump demands.

The story is also a good example of how the press typically spends no time or energy interrogating that $5.7 billion figure. Where does that number come from? Why now? What does it pay for? In story after story on the shutdown, the press has skipped right by these critical questions, but in doing so it makes a series of unfounded assumptions that assign more legitimacy to the president’s request than the facts show he and it deserves.

A few lonely pundits have held Trump’s $5.7 billion request up for scrutiny. Greg Sargent, columnist at the Washington Post, has taken the time to ask what should be fundamental questions about the main source of the shutdown impasse (Twitter, 1/16/19). Remarkably, he couldn’t find any national news reports that could satisfactorily answer them.

Jamie Dupree, who covers Washington for the Atlanta Journal-Constitution, also examined the origins of the $5.7 billion figure in a long blog post (1/12/19). But these were rare exceptions to an omission that is especially notable because the more one digs into Trump’s border wall funding request, the more arbitrary and phony it appears.

In fact, this $5 billion number did not publicly appear anywhere in Trump’s or Republican politicians’ funding requests or rhetoric until after the 2018 midterm elections. The same midterm elections, incidentally, where voters overwhelmingly rejected Trump’s draconian immigration policies. 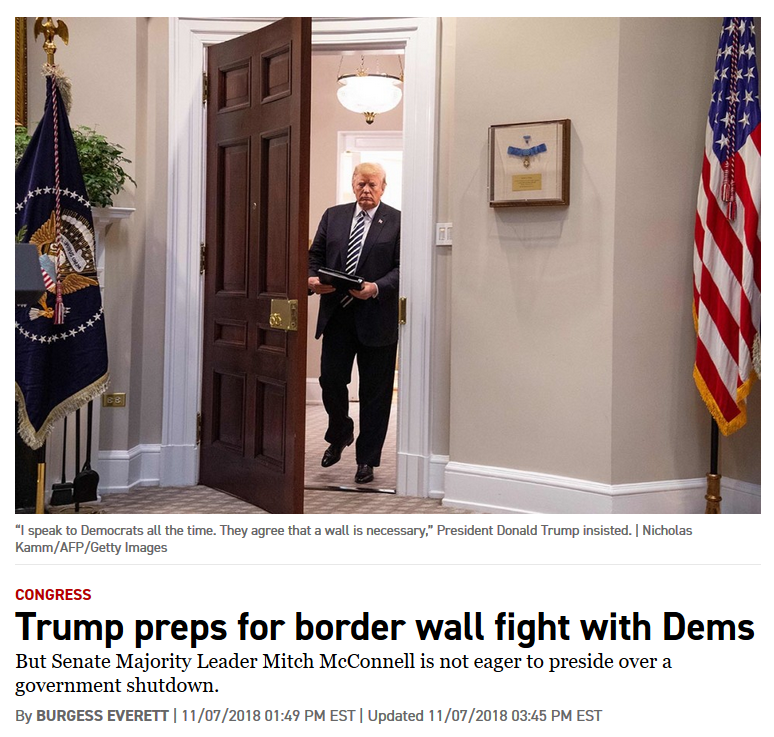 This Politico piece (11/7/18) may be the first mention of Trump’s $5 billion wall request–though it doesn’t explain where that number comes from.

A Politico article (11/7/18), published the day after the midterms, looks to be the first mention of anything like this figure. Notably, the story attaches no rhyme nor reason to Senate  Majority Leader Mitch McConnell’s logic: “McConnell is hoping he can provide Trump $5 billion for the wall, a threefold increase from the chamber’s initial offer.”

What’s the justification for this big increase, besides “hope”? No clues given. Why triple down on the wall now, just after voters forcefully rejected Trump’s fearmongering, “migrant caravan” rhetoric in the campaign home stretch? Again, Politico doesn’t seem to know, or care to ask.

It isn’t alone. Time and time again, shutdown coverage in national newspapers and cable news has just rushed right past the $5.7 billion number without a second glance. What this myopia misses is that Trump’s willful capriciousness was already evident two months ago. As the same Politico article briefly noted:

Barely an hour after Senate Majority Leader Mitch McConnell (R-Ky.) cautioned against a shutdown, Trump declined to rule one out and said that he wants “money to build the wall, the whole wall, not pieces of it.”

Of course, Trump did a 180º on the necessity of wall funding in the days right before the shutdown, before apparently being baited into another 180º by a couple of hard-right Freedom Caucus Republicans on Fox News, along with assorted conservative pundits, who insulted his lack of conviction. Again, his rapid flip-flop would strongly suggest the $5.7 billion has little to do with actual “border security” needs at this moment, and was instead mostly conceived of as a sop to the anti-immigrant voices who helped put him in office.

Trump’s commitment to this figure reached an absurd point at a Rose Garden briefing on January 4 of this year, when he repeatedly cited—and emphasized—the wrong amount of his request: “We mentioned the price that we want—$5.6 billion—very strongly,” he said of negotiations with the Congressional Democratic leadership. Even more surreal, his next sentence castigated those who he said keep randomly changing the funding amounts: “Because numbers are thrown around—1.6, 2.1, 2.5.”

Sure, it was a gaffe, from a president who shows no compunction about recklessly misstating facts and willfully lying whenever it suits him. Nevertheless, he went on to cite the $5.6 billion number five more times. But hey, what’s $100 million, give or take, when you’re trying to satisfy your political base, I guess?

Of course, Trump had corrected himself—or had been corrected—by the time of his boilerplate stump speech/primetime address. Even so, he only further confirmed the arbitrary nature of his $5.7 billion request by unexpectedly announcing that the wall design would now be completely different—steel slats, not continuous concrete. (This change, he claimed in another lie, was made “at the Democrats’ request.”)

Just how could Trump radically reshape the fundamental look of this massive project on a whim and still somehow claim to need the exact same amount of money from Congress? Shouldn’t such a monumental revision require the DHS and his OMB to sit down and recalculate more accurate construction costs, site plans and environmental impacts? Good luck finding these very basic accountability questions in the corporate press coverage—the apparently infinite malleability of the wall’s costs went mostly unmentioned.

The press has also shown little interest in assessing what, exactly, this money is supposed to be buying the American public, besides “more wall.” A White House “fact sheet,” released on the same day as Trump’s primetime speech, merely says this: “$5.7 billion for construction of a steel barrier on the Southern Border to fund 234 miles of new physical barrier—an increase of $4.1 billion over the Committee bill.”

A few press reports have since mentioned this 234-mile figure, but this minimal coverage never digs into where or how these new border wall sections will be built, or why so many more are suddenly necessary. One likely reason for this is that the DHS itself has failed to explicitly provide these details in its fact sheets. That’s an explanation, but not an excuse. And it should be an invitation for the media to do its job. 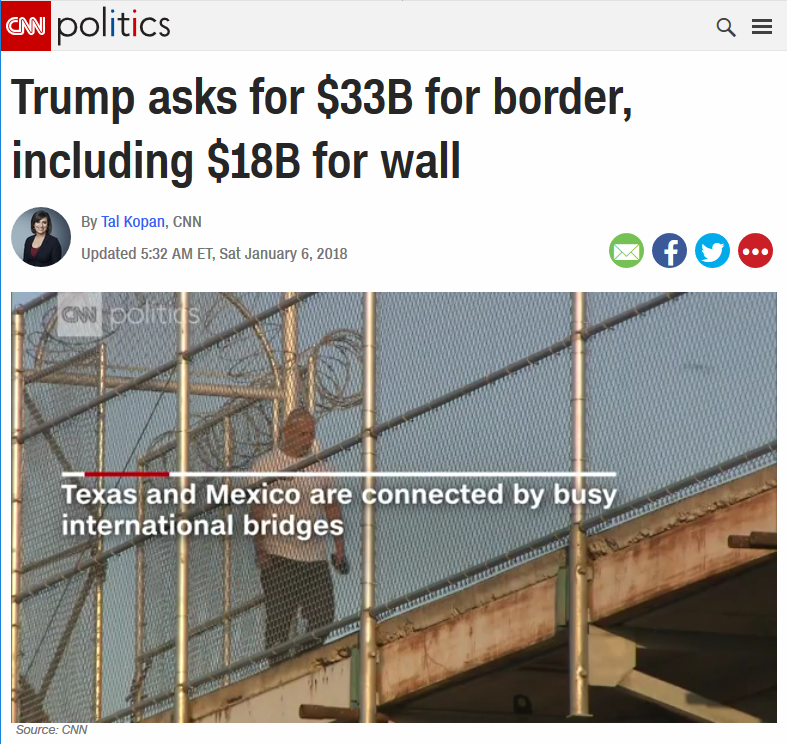 In fact, as the White House fact sheet says—and as Sen. McConnell alluded to back in November—the Trump administration had far less ambitious requests for wall funding not that long ago. As a CNN story (1/6/18) reported last year:

The fiscal year 2018 request would have [built] 60 miles of primary wall and 14 miles of secondary wall to the tune of $1.6 billion, for example, and FY19 would cover 65 miles for another $1.6 billion. The numbers increase in subsequent years.

The White House’s ambiguous answer, in a letter to Congress on January 6, was that the new, larger amount will be able to fund the “top 10” priorities of the CBP’s plan. But where’s the administration’s evidence or justification for pushing forward for all this extra wall construction that it didn’t think it needed 12 months ago?

The reasoning can’t be unauthorized border crossings; those are running at near historic lows. There has been a record surge in families seeking asylum in the US, but immigration experts point out that border walls don’t act as an effective deterrent for these types of immigrants—they’re not trying to sneak in at remote, unguarded sections. Nor does increasing the length of the border wall have any significant impact on the flow of illegal drugs, which are overwhelmingly smuggled in from Mexico via ports of entry.

To be fair, the corporate media have covered these policy counterpoints to Trump’s rhetoric in some detail, but what they routinely fail to interrogate is how these contradictions betray the lack of reasoning behind the administration’s massive funding demands.

This is a shameful oversight, because the further you dig down into the bureaucratic weeds, the more of a nativist stalking horse the White House’s $5.7 billion number becomes. For instance, a GAO report from just six months ago noted this little tidbit about how the CBP prioritized its border security wall/barrier sites. (This is the same priority list that provides the DHS’s “top 10” that the $5.7 billion will pay for.) According to the report (emphasis added):

The strategy included an overall estimate of the cost to construct barriers at Border Patrol’s top 17 priority locations—an estimate of $18 billion for 722 miles of barriers. However, according to CBP officials, that estimate was based on an average cost per mile and is not intended to reflect the costs of individual construction projects. According to DHS officials, the prioritization methodology was not intended to assess costs but rather to identify Border Patrol’s operational priorities. DHS plans to assess costs as it develops future budget requests.

Has the DHS in fact reassessed its costs for its “top 10” priority border wall sites? It’s hard to believe they did so in the six months since the GAO report. Certainly, there’s been no proof presented by that agency or the White House. And how does switching to a design of all steel slats instead of concrete, as Trump blithely declared last week, affect the costs? It defies belief to think that anyone in the administration, let alone the president, knows the answers to these fundamental questions about how taxpayer money would be spent on more border walls.

To recap: the Trump administration’s current $5.7 billion demand for wall funding a) conflicts with its own previous, lower funding requests for the same time period, b) offers no specific or evidence-based justifications for rapidly increasing said funding, c) doesn’t explain how Trump radically revising the wall design would affect its cost and d) is based upon a CBP border security plan that didn’t bother with accurate, site-specific construction estimates in the first place.

So our federal government has been and remains partially shut down, all because of a wild-guess request for money, timed to assuage this president’s bruised ego after a political defeat, to pay for a constantly shifting wall design of unknown cost, that wouldn’t actually solve the so-called border crises it purports to fix.

It’s a massive Trump 2020 contribution wrapped in a boondoggle, in other words. All so this president can shore up his reelection chances, and finally appease a xenophobic base over a campaign promise he had two years to follow through on with a Republican Congress, but never did.

And yet, this backstory and evidence of the Trump administration’s broader duplicity on immigration policy, all of which flows directly from the capricious, unsubstantiated details of his $5.7 billion border wall demand, has been notably absent from the coverage by White House correspondents and cable news. The phony, opaque nature of the wall money figure is fundamental to explaining the shutdown to the public, but, ironically, this seminal piece of the story has gotten almost no attention in the corporate press.

The (apocryphal) advice given to Bob Woodward and Carl Bernstein for breaking open the Watergate scandal—follow the money—is still as applicable in 2019 as it was in 1972. Would that more of the press would follow suit today.