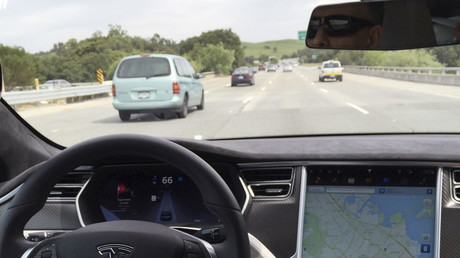 A squad of cops had to get creative to stop a speeding vehicle whose driver appeared to be asleep at the wheel. Despite blaring sirens, flashing lights, and shouts from the officers, the speeding Tesla Model S just kept going.

The quick-thinking cops in Palo Alto decided to bring the bizarre situation to an end as quickly and safely as possible: they first established a moving perimeter far behind the Tesla to keep other drivers safe before one of the officers, who suspected that the vehicle’s autopilot system might be engaged, drove in front of the car and began gradually slowing down.

The formation reportedly travelled seven miles in seven minutes before the runaway Tesla finally came to a stop a short time after 3am local time on Friday. Officers could then finally question the dozing driver, who turned out to be 45-year old Alexander Samek, who serves on the Los Altos Planning Commission. “It took them awhile to wake him up,” Montiel told Palo Alto Online.

The police then carried out a roadside sobriety test which Samek failed. He was arrested on suspicion of driving under the influence and booked into the San Mateo County jail.

“It’s great that we have this technology; however, we need to remind people that… even though this technology is available, they need to make sure they know they are responsible for maintaining control of the vehicle,” California Highway Patrol public information officer Art Montiel said.

Officers have yet to confirm that the car’s autopilot function was switched on but suspect the car was on driver-assist mode that provides semi-autonomous capability. According to the Tesla website, autopilot functionality can match the car’s speed to traffic conditions while staying within a lane, which seems to match the police description of the Friday night chase and subsequent arrest.

However, autopilot is supposed to detect if the driver’s hands are on the wheel or not and recent software updates warn drivers in as little as 30 seconds if it suspects they may not be paying attention. The car should automatically slow to a halt if the driver fails to respond to alert warnings.

Tesla recently celebrated one billion miles travelled by its vehicles in autopilot mode.