Less than a day after a gunman shot up a Christmas market in Strasbourg, France, President Trump used the news as pretext to issue fresh calls for a border wall between the US and Mexico.

“Another very bad terror attack in France,” Trump tweeted on Wednesday. “We are going to strengthen our borders even more. Chuck and Nancy must give us the votes to get additional Border Security!,” referring to the Democratic leaders in the Senate and House, Chuck Schumer and Nancy Pelosi.

Another very bad terror attack in France. We are going to strengthen our borders even more. Chuck and Nancy must give us the votes to get additional Border Security!

“The Democrats and President Obama gave Iran 150 Billion Dollars and got nothing, but they can’t give 5 Billion Dollars for National Security and a Wall?” the president added in a follow-up tweet.

Trump’s oft-repeated ‘build the wall’ tweets came less than a day after a 29-year-old gunman shot up a Christmas market in Strasbourg, leaving  two people dead, one brain dead and 12 injured in what French authorities called an act of terrorism. The suspect, who prosecutors say cried “Allahu akbar” during his rampage, comes from an immigrant family and has an extensive criminal history. 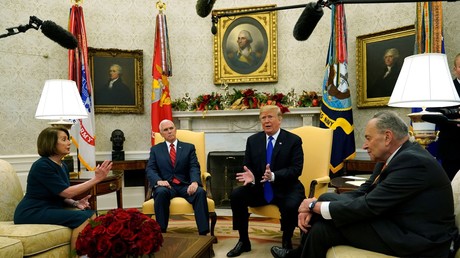 On Tuesday, Trump sparred with Pelosi and Schumer over border security in a televised shouting match in the Oval Office. In front of stunned journalists, Trump warned that he was going to shut down the government if his project of a wall on the US-Mexico border doesn’t get $5 billion in funding next year. Schumer accused Trump of throwing a “temper tantrum” during the meeting, while Pelosi dared Trump to “do it” and press ahead with the shutdown.

Before the meeting, Trump threatened to have the US military build the wall if Congressional votes cannot be found.

Trump’s insistence on building a wall along the US’ 2,000 mile border with Mexico is an old one, and the president has referenced foreign attacks before to justify its estimated cost of anywhere between $5 and $65 billion. Trump is currently asking for $5 billion, while Pelosi and Schumer have pledged $1.3 billion towards border security initiatives, including new fencing, but not a wall.

When IS (Islamic State, formerly ISIS) gunmen killed more than 300 worshippers at a mosque in Egypt last November, Trump made his familiar call for the wall. “We have to get TOUGHER AND SMARTER than ever before, and we will. Need the WALL, need the BAN! God bless the people of Egypt,” he tweeted at the time.

Will be calling the President of Egypt in a short while to discuss the tragic terrorist attack, with so much loss of life. We have to get TOUGHER AND SMARTER than ever before, and we will. Need the WALL, need the BAN! God bless the people of Egypt.

More recently, Trump again demanded support for the wall, and accused Democrats of enabling criminals and drug dealers, as a caravan of thousands of Central American migrants bore down on the US border this fall. Trump did deploy US troops to reinforce the border and erect temporary barriers in response, but the wall remained elusive.

Building a border wall was a core promise of Trump’s campaign, and one that the president has found almost impossible to make any progress on since taking office. While Trump once promised to build a wall “and have Mexico pay for it,” he has been limited to making minor upgrades to the existing fence since.