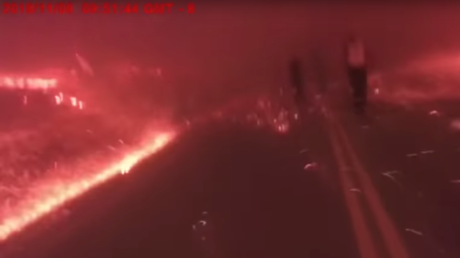 An apocalyptic bodycam footage from the morning the Camp Fire broke out in California shows the flame-ridden neighborhood of Paradise being swallowed by the inferno, as people desperately try to flee the fast-moving blaze.

The horrific scenes were captured by Butte County Deputy Aaron Parmley who on November 8 came to Paradise searching for four nurses who needed help fleeing the advancing wrath of nature. After suffering a car breakdown, Parmley found himself on foot amid heavy smoke, making it extremely difficult to breathe.

Doubting his odds of making it out of Paradise alive, the deputy turned on his body-borne camera to record what the man thought would be the last minutes of his life.

Walls of fire were consuming everything in the firestorm’s path. Houses, cars, and even front yards were ablaze. On the deserted streets, with sparks raining down on him, Parmley comes upon disoriented and panicked survivors. “Go towards the left,” he tells them, trying to guide them to safety in the almost zero visibility level of the red haze.

With time running out, suddenly a bulldozer appears from the thick smoke. Some survivors jump on the armored vehicle while others follow behind on foot to safety.


Despite all attempts to save lives, the Camp Fire eventually became the deadliest and most destructive wildfire in California history, killing at least 88 people and obliterating over 18,000 structures. The seventeen-day monstrous blaze covered an area of about 153,000 acres and destroyed most of Paradise and the adjacent Concow communities.