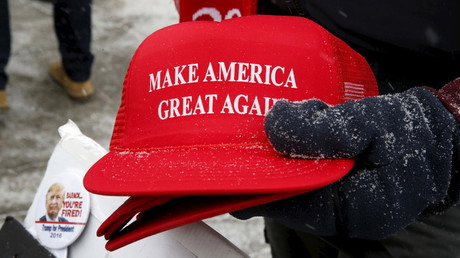 One US high school student’s red ‘Make America Great Again’ hat triggered his teacher into calling the kid an “a**hole” and evacuating the classroom.

In a video filmed by his classmate, the kid’s teacher gives him a telling off for the hat, saying that other students are “provoked by the presence” of it.

“If you’re scared of a hat, that’s no different than being scared of the dark in a basement,” the high schooler shoots back, slouching in his chair.

“Take your hat off or get out,” the teacher demands. “I’m either going to gather everybody up and go to another classroom, and you can remain here like an a**hole, or you can take your hat off.”

“I can’t sit here and learn?” the student asks. “What about freedom of expression?”

“I don’t care,” the triggered teacher responds, before evacuating the entire class into another room. Earlier in the video the teacher explains that he normally makes exceptions to the school’s ‘no hats’ policy, but would not this time.

Also on rt.com
Man who attacked teen over MAGA hat arrested for theft


The rebellious Republican isn’t the only high schooler to catch stick for wearing a MAGA hat, and a series of incidents show the hat can be a hazardous wardrobe choice. A high school senior in California was arrested in August for grabbing a classmate’s MAGA hat, then slapping her teacher as he escorted her out of the classroom.

The hat, she said, was a “racist and hateful symbol,” and her tirade against its owner a “political statement.”