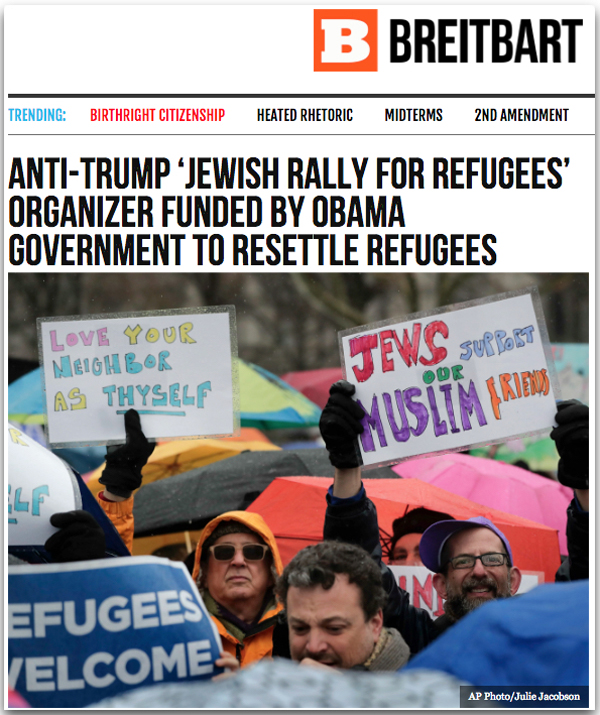 Breitbart headline pulls together Jews, refugees, organizers and the “Obama government” in one “anti-Trump” package.

As the facts of the fatal antisemitic attack at a Pittsburgh synagogue unfold, one of shooter Robert Bowers’ motives has come to the forefront: his obsession with his target’s association with HIAS, formerly known as the Hebrew Immigrant Aid Society.

Originally founded in the late 1800s to assist Jewish refugees, HIAS today works to resettle refugees of many backgrounds, operating with offices around the globe. Bowers may have acted alone on his fear that the group was helping an “invasion” of non-white newcomers to the United States, but the rhetoric around HIAS that motivated his butchery comes straight from the pages of Breitbart, the Pravda of the alt-right.

Although the usually no-holds-barred site used middle-of-the-road wire stories in its reporting on the Pittsburgh shooting that included Bowers’ obsession with HIAS, the group had been in the editors’ crosshairs for years, part of the site’s efforts to serve its extremist audience by presenting “white Christians” as the endangered target of conspiratorial forces (FAIR.org, 11/15/16).

In a story (12/3/15) about HIAS’s connection to rabbis who called on the US government to take in more refugees, Breitbart focused on the group’s finances and grants from the United Nations — invoking tropes about “Jewish globalism.” It also added, “A Breitbart Jerusalem sampling of dozens of signatories to the letter found the vast majority of rabbis hail from the politically progressive Reform and Reconstructionist Jewish movements,” a sort of warning that some Jews are more politically dangerous than others. 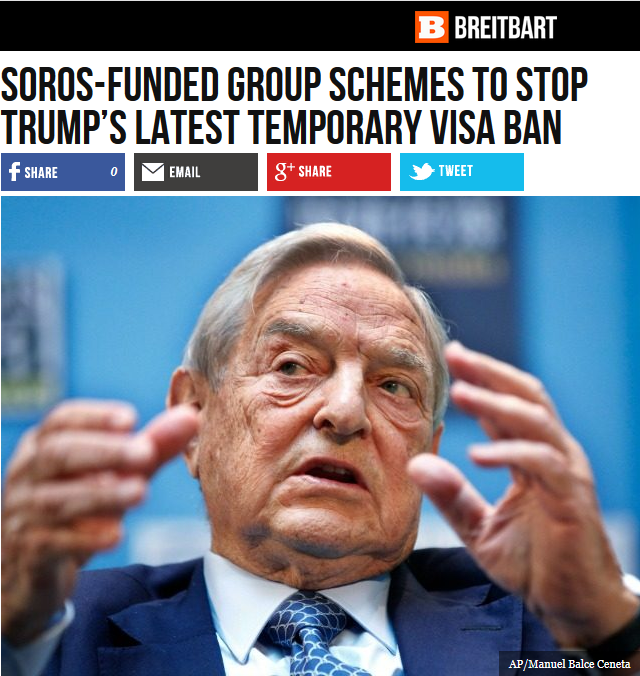 HIAS’s ample finances are a recurring theme in Breitbart’s coverage, as if it’s a scandal that an international advocacy group would engage in fundraising to support its operations. Another story, “Soros-Funded Group Schemes to Stop Trump’s Latest Temporary Visa Ban” (3/28/17), ties HIAS to immigrant rights groups funded by George Soros, the Jewish philanthropist, who has become a sort of a bogeyman for the far right, portrayed as a lone Jewish financier whose largesse is responsible for left-wing challenges to traditional power.

Another constant drumbeat in Breitbart headlines and coverage is that HIAS was also enriched by the liberal Obama administration, as in, “Anti-Trump ‘Jewish Rally for Refugees’ Organizer Funded by Obama Government to Resettle Refugees” (2/13/17). (The force of this critique is somewhat weakened by the fact that HIAS’s founding dates back more than a century.) In a particularly smarmy piece, Breitbart (3/2/18) mocked agencies like HIAS for “whining” that refugee resettlement declined in the first months of the Trump administration. Clearly, the editorial agenda of the website was to tighten borders, and it got what it wanted, but it needed to land another f-u on its political foes in the process.

Breitbart appears to occupy a place of balance in right-wing media, sounding the dog whistles about HIAS without invoking anything about Jews specifically, sheltering it from accusations of antisemitism. Articles on Fox News’ website that cover HIAS are surprisingly fair, and the site even featured an op-ed by a HIAS vice president in 2015. 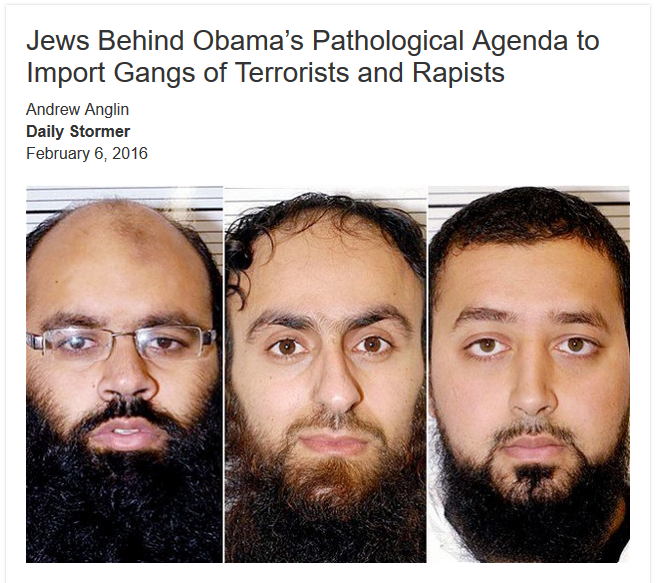 The Daily Stormer illustrates what appeals to antisemitism look like with no dogwhistling.

Other outlets are more brazen. The white supremacist Daily Stormer (2/6/16) indicts HIAS and other advocacy groups for driving the Obama administration’s immigration policy—or, in Nazi-speak, “Jews Behind Obama’s Pathological Agenda to Import Gangs of Terrorists and Rapists.” Another prominent white nationalist magazine, American Renaissance (10/25/13), calls the group a leader of the “refugee racket” bringing in “illiterates” who “like to have babies.”

But you don’t have to go to the fringes of right-wing media to find HIAS being used as a punching bag. In a post on the “darkness of the women’s march,” Townhall columnists John and Andy Shlafly (1/25/17) called into question the legitimacy of the march at Trump’s inauguration  since HIAS, “an organization that receives more than half of its income from US taxpayers,” was a sponsor. (“Why refugees at a women’s march? These things don’t happen by accident,” the authors warned.)  Mark Krikorian, an advocate for restrictive immigration policies, warned in the National Review (4/9/09) that HIAS and other Jewish pro-immigrant groups were trying to further their agenda with “politically engaged and generally liberal American Jews.”

While there are a great many non-Jews in the United States who advocate for immigrants and refugees, centering HIAS as this agent of diluting the nation with non-Westerners is essential for the far right to present multiculturalism, tolerance and immigration as something distinctively foreign, an element of American politics not because it is in the country’s DNA, but because a radical minority thrust it forward.

This is compounded with Breitbart’s and other alt-right outlets’ obsession with Soros, tying the pieces together in an ideologically digestible conspiracy: a foreign Jewish man uses his foreign Jewish money to help other foreign Jews bring in more foreigners, against the will of “regular” Americans.

HIAS’s history isn’t one that screams far left, however: Between World War II and the Vietnam War, its main objectives were to shuttle Jews to the United States from the Soviet Union, revolutionary Cuba and Nassar’s Egypt. But this is not how HIAS fits in with the narrative created by Breitbart and others: HIAS and Soros are part of the left-wing (Jewish) program to undermine America through immigration.