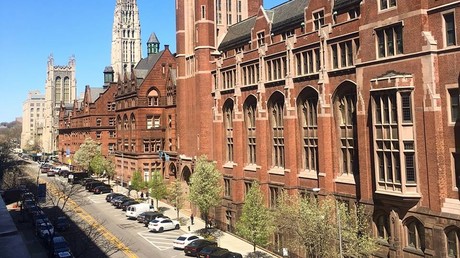 Red swastikas were spray-painted on a professor’s office walls at Columbia University’s Teachers College in New York this week, prompting an NYPD investigation.

Elizabeth Midlarsky, a psychology and education professor, who has worked at the college for 28 years, found the two huge, red swastikas along with the word “Yid,” an anti-semitic slur, scrawled on the walls of her office at about 1pm on Wednesday.

Midlarsky told CNN that she “almost passed out” when she opened the door and witnessed the defacement of her office walls. She then quickly reported the incident to college security and officials.

“I’m usually not a fearful person, but they got me. I’m afraid,” she told the Washington Post.

Thomas Bailey, the president of Columbia’s Teachers College, said the college unequivocally condemns the “expression of hatred” which has “no place” in society.

“We are outraged and horrified by this act of aggression and use of this vile anti-Semitic symbol against a valued member of our community,” he said in a statement, adding that the school was working with the NYPD to find those responsible.


It wasn’t the first time the 77-year-old Midlarsky had experience anti-semitic harassment at the college, however. Her office door was also spray-painted with a swastika in 2007, she told CNN. At that time, she also began receiving hate mail in writing and by email, which she believed was related to her work as an activist.

This time, however, Midlarsky said she has no idea who was behind the incident and believes it was not connected to anything she has said or done recently, but was perhaps more broadly “connected to a trend and upsurge in anti-Semitism that we’ve seen in recent years.”

The targeting of Midlarsky comes just over a month after 11 Jewish congregants were killed in a gun attack on a synagogue in Pittsburgh. During a shootout with the police, alleged shooter Robert Bowers said “I just want to kill Jews.”