New York Times columnist Bari Weiss (5/8/18) describes some of the supposedly taboo topics—“That Which Cannot Be Said”—discussed by the “renegades” of the “Intellectual Dark Web”:

There are fundamental biological differences between men and women. Free speech is under siege. Identity politics is a toxic ideology that is tearing American society apart. And we’re in a dangerous place if these ideas are considered “dark.”

I agree that it’s dangerous to be under that degree of self-delusion; none of these ideas are remotely taboo; they’re the kind of things that are said routinely in outlets like, to pick one at random, the New York Times.

Take a piece that ran in the New York Times Sunday Review last month (4/20/18), headlined “Why Men Quit and Women Don’t.” Looking at the differences in male and female drop-out rates in the Boston Marathon, the article presents “a whole range of theories on why women out-endured men in Boston — body fat composition, decision-making tendencies, pain tolerance, even childbirth.” Lindsey Crouse, a senior staff editor for the Times‘ Op-Docs feature, quotes psychologist and TedTalk podcaster Adam Grant: “There’s a biological and social tendency for women to tend toward caregiving…. Women are more likely to reach out to runners next to them and offer support and seek support.” Was anyone scandalized to find this discussion of biological gender differences in the Times? 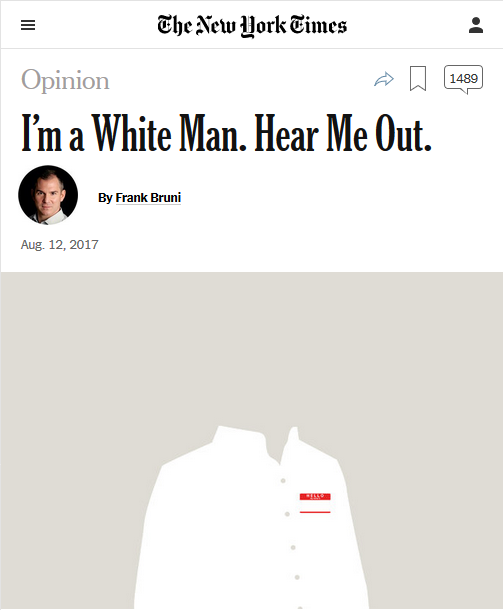 When will we stop silencing the demographic group that 69 percent of New York Times op-ed columnists belong to?

“Free speech is under siege” is a perennial column idea. In February (2/22/18), Weiss’s colleague Bret Stephens wrote a column headlined “Free Speech and the Necessity of Discomfort,” in which he argued that “journalism today is a profession under several sieges,” primarily “the siege of the perpetually enraged part of our audience.” Fellow Times columnist Michelle Goldberg had a more recent column (4/20/18) with the subhead, “Campus free speech is threatened on the left as well as the right.” Weiss herself wrote a column two months ago (3/7/18) decrying “a concerted attempt to significantly redraw the bounds of acceptable thought and speech.”

Identity politics is likewise a favorite punching bag for opinion writers. Witness David Brooks’ “Identity Politics Run Amok” (9/2/16), Frank Bruni’s “I’m a White Man. Hear Me Out” (8/12/17), Mark Lilla’s “The End of Identity Liberalism” (11/18/16)—the last of which became a book, The Once and Future Liberal: After Identity Politics, published by HarperCollins and reviewed in the Times (8/15/17).

I guess it’s not hard to see either the psychological appeal or the marketing advantages of pretending that your absolutely commonplace, widely publicized ideas are brave truths that have to be circulated via samizdat. But if you know what it actually feels like to have an idea that can’t be discussed in broad daylight, try suggesting that the wealth of billionaires ought to be confiscated to feed the hungry and house the homeless.