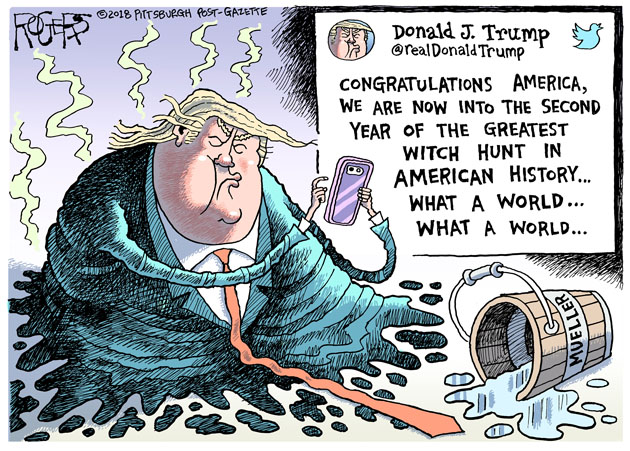 One of Rob Rogers’ anti-Trump cartoons (5/18/18) that was killed by the Pittsburgh Post-Gazette before his recent run of six drawings spiked in a row.

Cartoonist Rob Rogers’ section on the Pittsburgh Post-Gazette website has remained static for the past week, displaying the same “Trade War” cartoon since last Tuesday (6/5/18). Before that, six of his cartoons in a row were killed (FAIR.org, 6/6/18), all of which criticized President Donald Trump or satirized US racism.

Since his most recent cartoon was published, Rogers has opted to take personal days off, saying he has not heard from his editors since the spate of spikings, and the conflict has yet to be resolved.

Rogers told FAIR he believed the publishing of Tuesday’s cartoon created an illusion of resolution: “When they finally printed the trade cartoon it kind of looked like, ‘OK, everything’s back to normal,’ but it wasn’t.”

In the past, he said, the editorial process had felt freer and more collaborative. Rogers has been a cartoonist for the Post-Gazette since 1993. For many years, he would simply submit the cartoon and it would appear in the paper, but in the past decade, he began sending emails to his editors for approval of what he planned to work on on a given day. 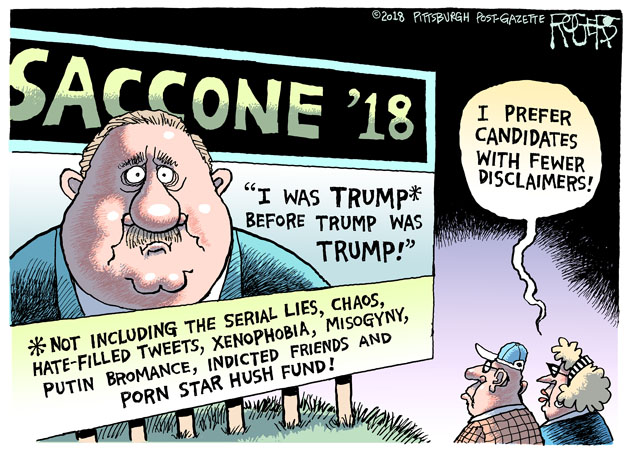 Another blacklisted Rogers cartoon (3/11/18) satirized congressional candidate Rick Saccone‘s attempts to embrace and distance himself from Donald Trump. The cartoon would have appeared in the Post-Gazette two days before the special election, which Saccone lost by 0.4 percent of the vote.

Under this system, he said, he would only have a few cartoons spiked each year. Since March 2018, however, when Keith Burris took over the editorial director position of the Post-Gazette, 19 of Rogers’ cartoons have been killed:

Up to the time the new editor came on board, I only ever had 2–3 cartoons a year killed, and they were usually for issues of taste, or that I maybe had, in their minds, pushed the boundaries too much. Once in a while, if they would kill one, I could talk to them and tell them why it was important, and what was behind the idea, and they would sometimes change their minds.

“I think he came with the intention of changing over the page like he did in Toledo,” Rogers said. “When he came, since that time, I’ve had 19 cartoons or ideas killed.”

Rogers recalled some of the cartoons spiked before the reign of Burris, on topics including the Catholic Church, reproductive rights or US involvement in Afghanistan. But never, Rogers said, have so many cartoons depicting a single person been rejected. Though some of Rogers’ cartoons satirizing Trump have run in previous months, most of his recently killed cartoons were about the president—on topics ranging from Stormy Daniels to the Mueller investigation to the Trump’s attacks on the FBI.

“When you have a record number of cartoons killed and 90 percent of them are about Trump, something’s happening,” Rogers said.

Rogers said he was given no explanation as to why the six most recent cartoons weren’t published. “Basically, communications broke down,” he said. 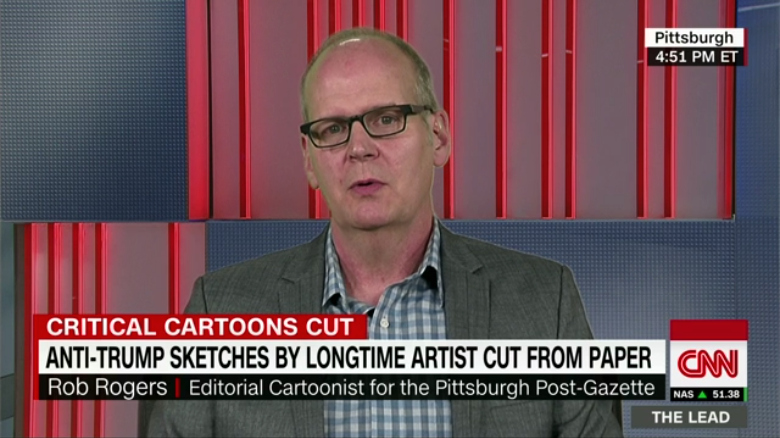 CNN’s Jake Tapper spoke to Rogers last week on The Lead (6/6/18). When CNN reached out to the Post-Gazette for comment, a representative responded:

This is an internal, personnel matter we are working hard to resolve. It has little to do with politics, ideology or Donald Trump. It has mostly to do with working together and the editing process.

Rogers, however, said he didn’t buy that explanation. “It’s clear from the ones that have been killed that it’s more than just about a personal issue,” he said.

As far as the Post-Gazette “working hard to resolve” the issue, Rogers said he has yet to hear from them about any progress.

Rogers said he feels the opinions of the Post-Gazette’s executive powers are beginning to change the content of the paper. “My views have always remained the same,” Rogers said:

I’ve always been a left-leaning cartoonist that tries to be provocative and be funny and do the best work I can do. The page is changing. Not because of me. And I feel like they want an illustrator that will reflect the views of the publisher.

However, he said, citing Fox News, Sinclair Media and even the yellow journalism of the past, news outlets pandering to particular ideologies is not uncommon.

“There’s been a proud tradition of publishers putting their heavy hand on the scales of opinion in their page and slanting it,” Rogers said. “They have every right to hire whoever they want or fire whoever they want, but they don’t necessarily have the right to tell me to change my views in the process.”

Rogers also said he’s heard from readers who feel content outside of the opinion section has also been changing:

People I see on the street, friends, have said, “I’ve noticed the letters have changed. There are more positive letters about Trump,” or they say that they’ve noticed the way the stories are played are different than the New York Times and the Washington Post, whereas they used to be very similar in the old days. 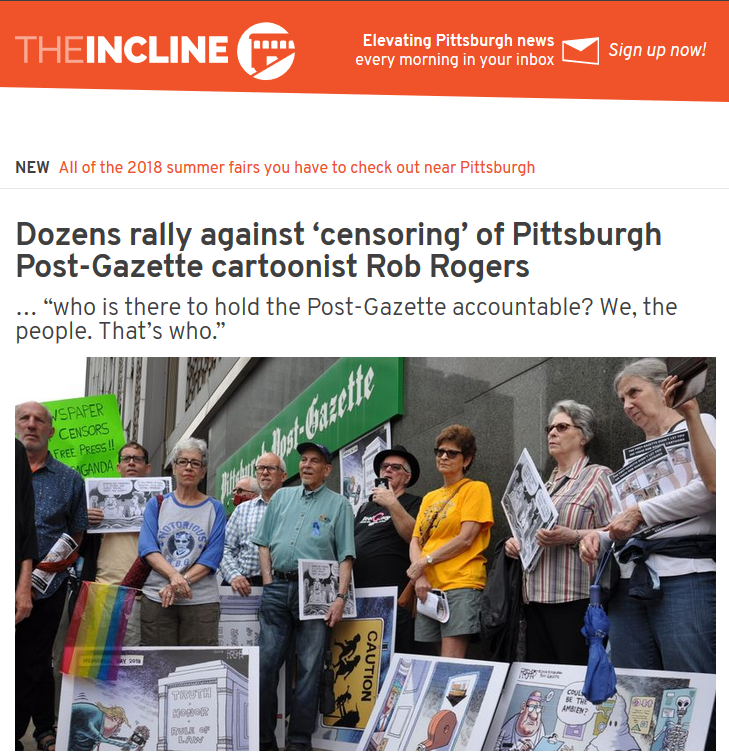 Local news site the Incline (6/10/18) reports on a protest against the black out of Rob Rogers’ cartoons.

Additionally, Rogers has received an outpouring of support from readers and fans via letters and social media posts. He said he was blown away by people’s involvement. On Sunday, dozens rallied outside of the Post-Gazette’s former offices to protest what they referred to as the “censorship” of Rogers’ cartoons (Incline, 6/10/18).

Regarding the word “censorship,” though, Rogers made clear the distinction between the editorial stifling of his views and the harsh legal action against political critics that occurs in some countries:

It’s not the same as being thrown in jail in government for drawing the president. That has not happened, and that would be real censorship, and it does happen in other countries. I don’t want anyone to get the wrong assumption here.

Regardless of terminology, Rogers still said the issue is of great concern, and indicative of a greater trend in this country:

The issue has received local coverage on Pittsburgh news site the Incline, the Philadelphia Inquirer and a local NPR station, as well as some national attention from CNN, the Washington Post and CJR. Rogers said he is unsure why the situation is not being more widely reported, but guessed that perhaps the size of the Post-Gazette, and the lack of resolution of the situation, could be contributing factors.

Rogers is currently still employed by the Post-Gazette, and said he doesn’t want to quit, as he has not done anything wrong. He hopes he can continue his work, regardless of the venue in which it is published:

Whatever happens, my plan would be to continue to try to draw the kind of cartoons that I think are needed today, especially today, in this climate when there are attacks on the media, attacks on free press, when there’s abuse of executive power. I think it’s especially important now to use cartoons and satire to afflict the comfortable.

You can send a message to the Pittsburgh Post-Gazette at this link (Twitter: @PittsburghPG). Please remember that respectful communication is the most effective.