24 hours after it was revealed that rumors of the death of Russian journalist Arkady Babchenko had been greatly exaggerated, someone still needs to tell UK’s Boris Johnson, if his Twitter feed is anything to go by.

The top tweet on BoJo’s twitter feed, a day after Babchenko reappeared like Lazarus, still says that he is “appalled” about the murder – that didn’t happen, and that “We must defend freedom of speech and it is vital that those responsible are now held to account.”

Appalled to see another vocal Russian journalist, Arkady Babchenko, murdered. My thoughts are with his wife and young daughter. We must defend freedom of speech and it is vital that those responsible are now held to account.

We’ll be waiting a long time for a follow up tweet in which Johnson says how appalled he is that he was misled by the intelligence service of an ally, although perhaps he’s now immune to embarrassment and won’t let it bother him. With Johnson in charge, I expect the rest of the Foreign Office would be in favor of some minor curbs on free speech.

The Foreign Office has recently been caught deleting tweets that made misleading claims about Russia over the Salisbury spy poisoning, so Johnson can’t be expected to delete the tweet insinuating Russian guilt for a fake murder, but couldn’t he at least express how glad he is to hear that the journalist, he was so moved to write about, is alive? Or at least just let the world know he’s seen the news? 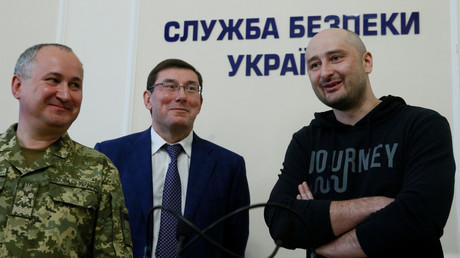 At this point it’s not entirely clear what happened with the very much alive Babchenko, with much of the global media now a little hesitant about taking the Ukrainians on their word.

There are question marks over the veracity of the evidence that the Ukrainian intelligence services believe they have against Russia over an alleged plan to kill the Russian journalist, but current British government policy appears to be that there is no excuse to pass up the chance to have a good old dig at Russia, even when the facts change.

It would be unkind to suggest that Boris is not fully devoted to the safety of free speech and journalists in Ukraine, but it is probably fair to speculate that the description of Babchenko as a “murdered Putin critic” was what really got him scrabbling online. The revelation of an ‘alive Putin critic’ hasn’t so far been deemed tweetable by Boris.

Further analysis of Johnson’s twitter feed shows three of his last five tweets have been aimed at Russia, the other two were about saving elephants. The sixth and seventh tweets are about dementia and recycling, but the reader can insert their own joke there.

Just spoken to Bill Browder – very glad that he has now been released. Moscow should concentrate on bringing those responsible for the murder of #Magnitsky to justice

Setting yourself up as a ‘Putin critic’ is like a flare gun in a dark room for anyone wanting to attract the attention of Western politicians now. Just below Johnson’s tweet about Babchenko, we see that the Foreign Secretary had recently come off the phone with self-styled “Putin enemy number one” Bill Browder who had just been released from custody over in Spain after Moscow had requested his arrest on charges of fraud.

The Foreign Secretary was on the phone to Browder so fast, any Brit who finds themselves in a sticky situation abroad and in need of Foreign Office assistance would be well advised to put ‘Putin critic’ down as their occupation on the arrest forms.

When Russia is a target, a country like Ukraine, which will see some advantage to undermining Moscow, can play on the fault lines being caused by what the Kremlin claims is a concerted campaign against it. In other words you can pretend to kill someone who has the reputation of being a Putin critic, and be safe in the knowledge that not even senior international figures will ask any hard questions about what actually happened.

The Babchenko incident shows that the British government remains quick to accuse Russia where it is expedient, but has so far not found a way to dial back the criticism when the facts come in.